Deb writes under the pen-name "Introspective" for InfoBarrel. You can follow her on Twitter, Google+, Linked-in, and Instagram @DebW07.
InfoBarrel is a writing platform for non-fiction, reference-based, informative content. Opinions expressed by InfoBarrel writers are their own.
InfoBarrel > History

United States Presidents Who Died While in Office

One Person - One Vote

Being a United States Citizen affords an individual numerous rights. One of these rights is to participate in a free election and cast a secret ballot. "One person, one vote" came out of a Supreme Court decision and it remains one of the fundamental rights that sets us apart from other nations.

This right extends to the election of the president, and while no president has ever enjoyed the favor of 100% of the people, it is still the reigning tradition to give the President of the United States respect. At times this may seem like a task beyond reach because political partisan runs deep. When one side is in power the other side is complaining loudly. But complaining is one thing, it’s quite another when people take their dissatisfaction to a level of wanting to harm anyone, especially a president.

2013 will mark the 50th anniversary of the last death of a sitting U.S. President. Although no one can control a death by natural causes and subsequent attempts to assassinate a sitting president have been successfully quelled, it is the sincere hope that there will never again be another assassination of a U.S. President, whether in or out of office.

United States Presidents Who Died While in Office

the Whig Party, William Henry Harrison was the 9th president. He took office on March 4, 1841 and one month later on April 4, 1841, he died of pneumonia (most likely contracted while giving his inaugural speech).

President Harrison was born on February 9, 1773 and served one term in office. Although his time was short, he left us with these notable quotes; "There is nothing more corrupting, nothing more destructive of the noblest and finest feelings of our nature, than the exercise of unlimited power," and "The people are the best guardians of their own rights and it is the duty of their executive to abstain from interfering in or thwarting the sacred exercise of the lawmaking functions of their government." 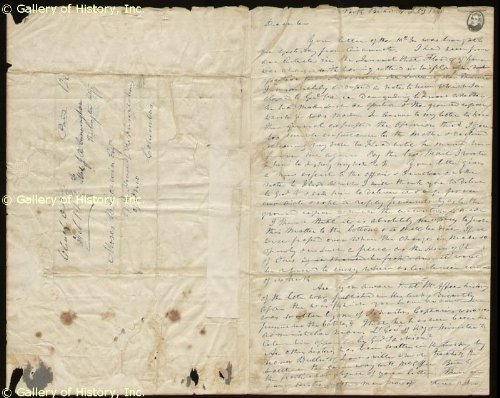 Another member of the Whig Party, Zachary Taylor was the 12th president, beginning his term on March 4, 1849. He died on July 9, 1850 of natural causes.

President Taylor was born on November 24, 1784. He served in the United States Army and was known as "Old Rough and Ready." His most famous quote is "I have always done my duty. I am ready to die. My only regret is for the friends I leave behind me." 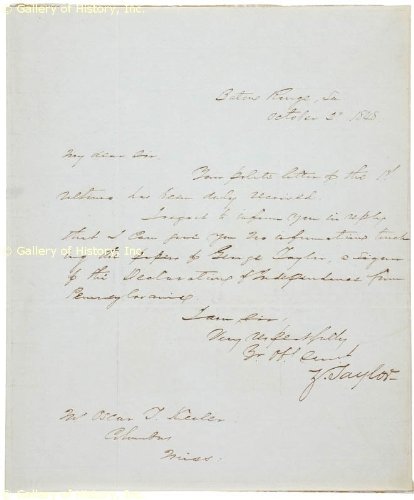 One of the most famous presidents, Lincoln rose from humble beginnings to become the 16th President of the United States of America. His term began March 4, 1861 and he was assassinated April 15, 1865.

After becoming president, Lincoln issued the Preliminary Emancipation Proclamation in 1862 which declared that all slaves in rebel states should be set free as of Jan 1, 1863. On November 19, 1863, Lincoln gave a speech at Gettysburg, Pennsylvania, known as The Gettysburg Address. The famous speech began with the words "Four score and seven years ago our fathers brought forth on this continent, a new nation, conceived in Liberty, and dedicated to the proposition that all men are created equal." On April 15, 1865 President Abraham Lincoln was assassinated by Confederate sympathizer John Wilkes Booth.

Other quotes by Abraham Lincoln are "A house divided against itself cannot stand," and "A friend is one who has the same enemies as you have." 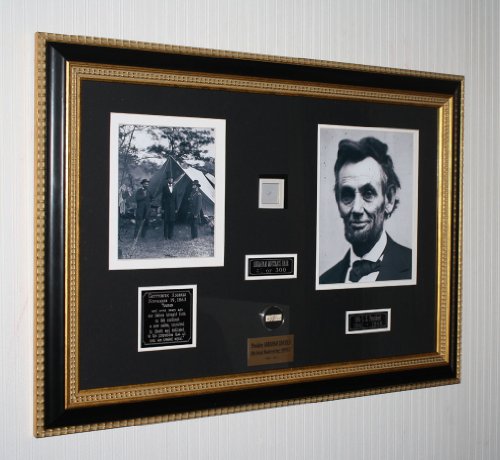 President Garfield served in the U.S. House of Representatives nine consecutive terms before being elected President. His strong support for African-American civil rights lead him to appoint several African-Americans to prominent federal positions. On July 2, 1881, President James A. Garfield was fatally shot by Charles J. Guiteau.

Some quotes attributed to President Garfield are "Ideas control the world," "A brave man is a man who dares to look the Devil in the face and tell him he is a Devil," and "He who controls the money supply of a nation controls the nation." 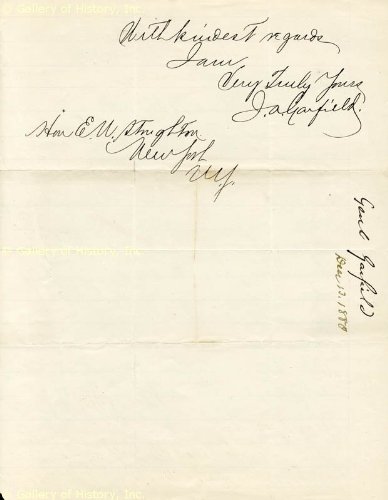 William McKinley was elected president after a contentious race against William Jennings Bryan. The issue at the heart of the contention was the Nation's money supply. Bryan, who was a candidate of both the Democratic and Populist parties, supported the idea of a bimetallic standard recognizing coins composed of gold or silver as legal tender. McKinley, on the other hand, ran on the platform of "The Gold Standard" in which the standard economic unit is a fixed weight of gold. (On a side note, many historians believe the book The Wonderful Wizard of Oz can be interpreted as a political allegory on the issue of the gold standard and the political atmosphere surrounding it. For more information on this topic, see the article The Wizard of Oz ~ A Political Statement?)

McKinley was nominated for another term and ran against Bryan once again in 1900, and once again McKinley won, but this time his margin of victory was even greater. On September 6, 1901, while McKinley was shaking hands with several people in a crowd, someone fired two shots into his chest and abdomen. He was rushed to the hospital but died on September 14, 1901.

Under the leadership of William McKinley America passed The Gold Standard act, establishing gold as the only standard for redeeming paper money. In addition, the U.S. became a world colonial power.

Notable quotes by President McKinley are "That's all a man can hope for during his lifetime - to set an example - and when he is dead, to be an inspiration for history," "War should never be entered upon until every agency of peace has failed," "Our differences are politics. Our agreements are principles," and "Unlike any other nation, here the people rule, and their will is the supreme law." 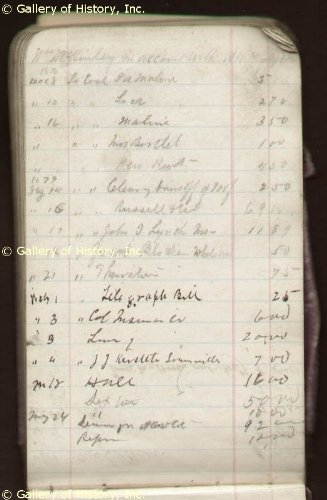 Harding was a popular president, his administration created a Federal budget system, reduced taxes, compelled tight limitations upon immigration and restored the high protective tariff. In 1923, postwar depression gave way to a new growth of wealth. Several newspapers ran positive articles about how Harding kept his campaign promise of "Less government in business and more business in government."

While Harding may have kept his promises, he was shocked to learn that certain officials in his administration were corrupt and using their positions for their own self gain. In the summer of 1923, Harding sought the counsel of his Secretary of Commerce and trusted friend, Herbert Hoover. He asked Hoover whether he should expose the scandal. Although Hoover encouraged Harding to bring it to light, Harding was fearful of the political repercussions. On August 2, 1923 Harding suffered a fatal heart attack.

Some quotes by Warren G. Harding are "I have no trouble with my enemies. I can take care of my enemies in a fight. But my friends, my goddamned friends, they're the ones who keep me walking the floor at nights!" "Every student has the ability to be a successful learner," and "Our most dangerous tendency is to expect too much of government, and at the same time do for it too little." 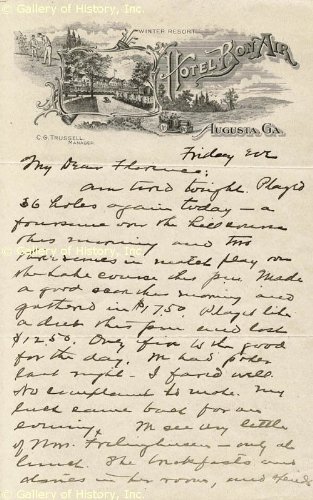 President Roosevelt is famous for enacting The New Deal which enlarged federal regulation of the economy, created social programs and increased the power of labor unions. Businessmen and bankers protested against Roosevelt’s New Deal because he had taken the Nation off the gold standard. They also complained about the deficits in the budget and Roosevelt’s concession to the labor unions. Roosevelt didn’t budge but created a new program of Social Security and a work relief program for the unemployed. In addition, he placed a larger tax burden on the wealthy while placing new controls and regulations on banks.

After the Japanese attack on Pearl Harbor on December 7, 1941, President Roosevelt came before a Joint Session of Congress and declared the date would "live in infamy." He received overwhelming support from Congress for a declaration of war against Japan.  On December 11, 1941, Germany and Italy declared war on the United States as a result of a Tripartite Pact with Japan and the United States formally declared a State of War against Germany and Italy. As the war was coming to an end, President Roosevelt suffered a cerebral hemorrhage and died on April 12, 1945.

Some well-known quotes by Franklin D. Roosevelt are "Be sincere; be brief; be seated," "Happiness lies in the joy of achievement and the thrill of creative effort," and "I ask you to judge me by the enemies I have made." 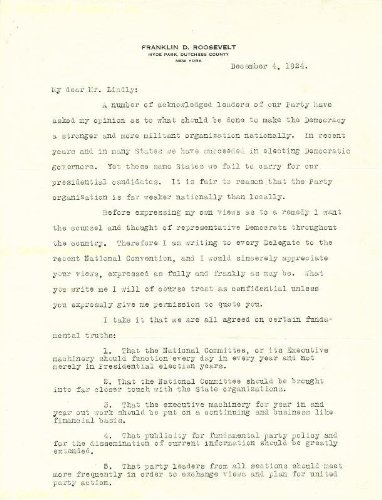 His administration was known as "Camelot" and in one of the most famous inaugural speeches Kennedy told the Nation to "Ask not what your country can do for you, but ask what you can do for your country." On November 22, 1963, while riding in a motorcade in Dallas, Texas, President Kennedy was assassinated by Lee Harvey Oswald.

Some famous quotes by John F. Kennedy are "Do not pray for easy lives. Pray to be stronger men," "If a free society cannot help the many who are poor, it cannot save the few who are rich," and "Change is the law of life. And those who look only to the past or present are certain to miss the future." 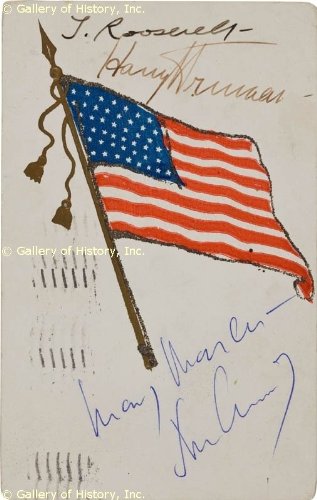