Unleash the Excitement and Chaos of Angry Birds into Your Living Room with the Mattel Angry Birds Board Game - Angry Birds: Knock On Wood

Angry Birds is a phenomenon that has come a long way from the simple game played on smart phones and tablets. Since it emerged on iOS at the end of 2009, the franchise has grown extensively.

The game now inspires live action recreations in Barcelona, a range of toys and accessories and even a possible film. For people not yet familiar with the concept, it is simple

Basically, your irate avian friends are fired, by a catapult under your control, at a group of pigs who have created a fortress for themselves. Defeat the pigs and you progress to the next level.

So how does Angry Birds: Knock On Wood fit in to this franchise, and how do you turn such a simple app into a board game?

Taking inspiration from the simplicity of the game play and the opportunities for construction and demolition, this Mattel Angry Birds board game basically brings the simple elements of the original application into a 3D kit.

Your children will have as much fun recreating the levels and placing the pigs into position as they will launch the birds and destroy their creations.

All the characters are present - one of each type of bird, four pigs, a bonus star and egg, the catapult, fourteen building blocks plus plenty of mission and points cards.

But doesn't that make it a little limited? Won't kids get bored easily?

Older kids may tire of the game, but there are lots of combinations of skill levels and missions to ensure that playing Angry Birds: Knock on Wood does not become too repetitive.

The reception to the game so far has been positive, so much so that a follow up - Angry Birds: On Thin Ice - has recently been released.

If anything, with this board game, Mattel have created a gaming experience that adds to the original concept. The satisfaction of successfully eliminating the pigs is that much greater when they are physical pieces that can be sent flying across a room rather than pixels on a screen.

Also, by recreating the much loved figures with such detail and accuracy, the game opens up opportunities for your children's imagination to run wild.

So are we really saying that this Angry Birds board game is better than the original game?

No, it is not necessarily better. There is an accessibility and range of levels to the video-game and its expanding number of titles that cannot be equalled; however there are other advantages to playing the board game instead.

The app is very much designed for single player use, but with the board game, whole families can get involved because the game is for two to four players at a time.

This makes it a much more sociable experience for siblings or friends and should hopefully add to their level of enjoyment. The board game also takes your child eyes away from the screen and allows them to use more skill and imagination. 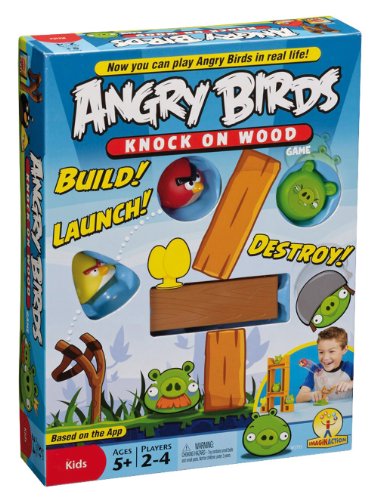 OK, so the Mattel Angry Birds board games provides a better playing experience, hours of fun and can bring the family together. Is there anything that it can't do?

Unfortunately there are limitations to the game and aspects that can be seen as disadvantageous - more so for parents than children. Firstly there is the safety aspect to consider.

Because there are so many figures and small parts to the game, it is not recommended that any child under the age of five plays the game because of choking risks.

There is also the problem of the lack of pieces. Only having one type of each bird and bonus piece can be problematic, especially if they get propelled across the living room never to be seen again.

This leads to the final issue, having the safety requirements in place and adequate space to play the game without the risk of damage or chasing after stray pigs.

Does this mean that parents should buy the Angry Birds: Knock On Wood Board game or not?

Overall, the pros certainly outweigh the cons when it comes to this game. Providing you have the patience and space to let your children unleash the potential of the game.

Iit can provide fun for most of the family for hours on end. It will definitely bring an exciting new Mattel  game to your living room.