Ryan's blog, How To Earn Money Online, is dedicated to teaching online entrepreneurs ethical strategies and techniques to generate passive income.  He has a focus on article writing, blogging, niche sites and app development.
InfoBarrel is a writing platform for non-fiction, reference-based, informative content. Opinions expressed by InfoBarrel writers are their own.
InfoBarrel > Entertainment

A friend of mine…well, more like a friend of somebody that I know from work…went on vacation to one of those all-inclusive Mexican resorts.  One day while they were down at the pool, somebody broke into their hotel room and stole all their cash and credit cards but somehow forgot to take their $800 camera.  After they got home and had their film developed (this story pre-dates digital cameras), there was a one particularly memorable photo that haunts them to this day – it was a close up of the bandit using my co-workers’ friends toothbrush on a part of their anatomy that has no teeth!

Wait...you heard the same story involving your friend's second cousin? No way! What are the odds of that?

What are Urban Legends?

Urban legends aren't like traditional, canonized works of fiction; these tales come from spontaneous sources, which are often uncredited and unverified.  They are often based on an actual story (to help make them believable), then an overlay of pure fantasy is layered on top (to give them their mass appeal).  These stories come in all shapes and sizes, whether it be the local restaurant with the cockroach problem to the fast food chain who allegedly circulated an internal memo asking that items be intentionally omitted from every third drive thru order as a way to increase profits.  They also tend to coalesce around a few central themes, including:

Twenty years ago, these stories would spread by word of mouth.  A decade ago, they took the form of email chain letters.  Today, doctored photos are trending on Twitter within a matter of hours.  An enduring urban legend tends to change a little with each retelling of the story – this helps keep the legend relevant and intriguing.

The Telltale Signs of an Urban Legend

What makes an urban legend?  An urban legend, in its simplest form, is often framed as something that happened to a friend of a friend.  It's generally told second hand with enough plausibility to make people believe that it actually happened.

If someone starts telling you about something they heard, listen out for:

Countless urban legends formulate as either cautionary tales, contamination stories and tales based on humorous or supernatural elements.

Are most Urban Legends true or false?

Urban legends tend to have an element of truth in them, but for the most part are works of fiction.  Many modern urban legends consist of cautionary tales (ie fast food restaurants putting inedible objects in their food), they often gain a plausible platform.

Urban legends of the horror (or supernatural) type are not based in fact but they remain popular for years after their first iteration.  For example, the Bloody Mary urban legend is a tale where stating aloud the name of the vengeful and disfigured Mary into a mirror three times summons her into one's presence.  Another example is the vanishing hitchhiker tale.  A driver on a lonely road in the deep night comes across a young, hitchhiking woman.  The driver picks her up, and after driving a good distance, he looks into the backseat to see that she has vanished.  This tale has many variations, often involving the ghosts of deceased residents of a particular area.

Urban legends, like Bloody Mary and the infamous Killer in the House variants, often form the basis for many horror films, and in turn, get further ingrained in pop culture of today.

One classic urban legend doubles as a superstition—the Friday the 13th cautionary tale. Friday the 13th is believed to carry a stigma of ominous, negative energy that many people believe harbors bad luck.  On Friday the 13th, many people avoid scheduling events, such as weddings, to dodge the consequences that may occur.  There is even a horror movie franchise based on this legend.

The Alligator in the Sewer urban legend is a good example of a fact mutating into urban fiction.  It claims that alligators were brought from Florida to New York as pets for children, and then later released into the sewers through a toilet.  The urban legend actually mutated from a documented case from 1935, where an alligator actually got into the sewers of New York, lost from a presumable vehicle transporting it through the Northeast.

Let's see if you can tell whether this story is true or false:

If you have heard any really funny urban legends, I would love to hear them.  Please leave your story in the comments box below. 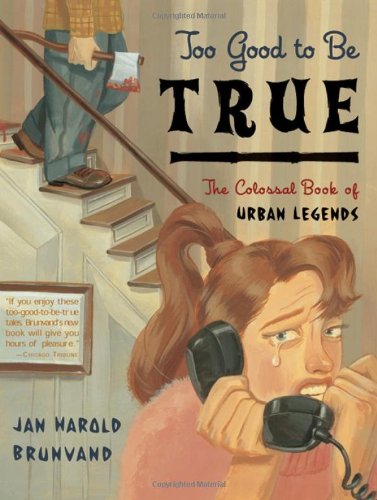