By The Wolfe Writes

I know that everyone is sick of the whole vampire thing. In fact, I do believe as far as the undead go, zombies are trending better at the moment. But recently I picked up a YA series by Rachel Caine called the Morganville Vampires. The series is about a young college girl, sixteen year old Claire Danvers, who receives early admission to a state college in Morganville, TX. Unbeknownst to young Claire, Morganville is run by a bunch of mostly civilized vampires.

Like the Hotel California, once you check into Morganville there's no checking out. That is the big secret of the small Texas town. All the citizens of quiet, little Morganville have to "contract" themselves to a vampire in return for protection; a regular blood-sucking mafia. Leaving the town is not possible without permission from the head vamp.

The story follows our main protagonist Claire as she moves in with three other Morganville locals and discovers the truth of her new town. Her roommates, Michael Glass, Eve Rosser, and Shane Collins are all unprotected; they have no contracts with any vampires. A human without a vampire protector is rare in Morganville. Humans without contracts are free eats for the vampire buffet.

The fangless characters are interesting enough. Michael Glass, a handsome and talented musician, has a mysterious secret of his own. Eve Rosser is snarky, funny, and totally Goth Shane Collins is the local bad boy and always ready to jump into trouble at any moment. But the unforgettable characters of Morganville, TX are the vampires.

Vampires that live among their human prey and are not trying to be best friends with their food is what sets this YA Vampire series apart from the others. For the most part the vamps in this series are slightly civil, but mostly bad. They have their own agenda. They tolerate humans as long as they serve their purpose; feeding them. Each Morganville citizen has to pay a monthly tax of a pint of blood. If not they are dinner...well, they kind of are anyway.

There are no whiny, sensitive vampires in this series. Some are "nice", but when the beast awakens, Mr. Nice Bloodsucker disappears quickly. Sure there are vampire and human romances, but no (thank The Lord) annoying love triangles with other paranormal beasts. The vampires fight amongst themselves to leverage power from each other and the humans quietly resent them in the safety of their homes.But do not worry; there is plenty of action as well. Our main characters are not afraid to put up a good fight when in need. There are great close call, near death chases and kidnappings, and an all-out vampire civil war!

The Morganville Vampire Series consist of 14 books with one due to be released in Nov 2013. They are a fast, fun read and I highly recommend them to anyone looking for a new vampire series to check out. The first book is Glass Houses. Again, parental disclaimer: 14+ for violence and sexual situations.

Want more YA reading fun? Check out my review of The 5th Wave by Rick Yancy and 5 Reasons I love YA Fiction. 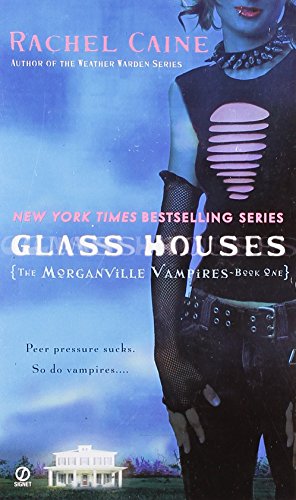