But the biggest lug in all of bunnydom is the Flemish Giant, a hefty hunk of bunny lovin’ that can tip the scales of upward of 50 pounds (23 kg).

And although they’re made of meat—and were specifically bred as “eatin’ rabbits”—these big, sloppy, oafish bunnies make great pets!  [Unlike that cow you keep in your basement or that beaver in your bathtub.]

Hefty HistoryBunnies are usually what you could call middlin’ in size.  Most breeds range from three or four pounds (around 1½ to 2 kg or so) up to averaging eight or nine pounds (4 kg).

There are exceptions of course.  The smallest recognized breed is the Netherland Dwarf, a tiny little feller with itty-bitty ears, short legs, and a baby face.  These guys “grow” to be about two pounds (less than a kilogram).

Ranging off the charts at the other end of the size spectrum is the Flemish Giant.  And the name does say it all.  They are Belgian in origin, from the northern area called Flanders (how ya get “Flemish” from “Flanders” is beyond me, but just go with it).  They also are large: adults can average 15 pounds (almost 7 kg) and more.

Apparently a steady food supply was a problem back in the 16th Century in Flanders.  There existed a type of rabbit that was known to the Flemish as the Stone Rabbit.  The term in their language, “Steenkonijn”, I think, translates into “bunny that can beat you up”.  Actually, the name is derived from the fact the weight average of such a rabbit was the archaic measurement called a Belgian stone, a bit over eight pounds (slight over 3.6 kg).

While that’s a pretty big animal it doesn’t get us to the second half of the name, “giant”.  To beef up the existing Stone breed for meat purposes it was cross-bred with other, physically hefty rabbits, as well.  Among that group was a now extinct breed called the European Patagonian rabbit.  [This has no relationship to the extant Patagonian rabbit of South America.  Those are small cottontails.  Nor are they related to the Patagonian hare—that critter is a rodent, and bunnies are not rodents.]  The European Patagonian was common in France as well as Belgium, and they were used for their fur and meat.

Getting to giant status took continual breeding efforts until reaching the mid 19th Century.  It was then, in 1860, that a particular specimen was first recorded as a “Flemish Giant”.

Big Boy on the BlockThe big bunnies were exported to England and then to the United States in the 1890s.  In particular, the US was involved in a difficult recessionary situation at that time stemming from a complex set of Federal legislative circumstances that led to a fiscal panic.  That meant many people looked for cheap food.

Rabbits filled that need.  In the US, meat rabbits became standard fare for many people on their tables in what was known as a “rabbit boom”.  To help gain a greater yield Flemish Giants were imported from Britain to the States.  Some of these were bred with existing meat stock, but many were raised as “pure bred”.

Breed standards were set down in 1893, and while they remained popular as a food item, these big boys didn’t catch on as show rabbits.  That changed in about 1910 when the first Flemish Giants were brought in to local livestock shows (like calves or a prize hog) for judging.  An organization was established in 1915—National Federation of Flemish Giant Rabbit Breeders—for the sole purpose of generating interest in the animals as both livestock and as pets.

Accepted show colors are black, blue, fawn, light grey, sandy, steel grey, and white.  Their longish, round-tipped ears, when laid flat on their back, should be about 25% of their body length.  They have mulish faces, with big, round eyes, and long eyelashes.

Over time, the breed has grown increasingly larger.  Animals of 25 pounds (over 11 kg) or more are not uncommon.  These are not necessarily overweight—they are just big ’uns!  In fact, the world’s largest rabbit is a Continental Giant (a slight variant of the Flemish Giant).  Dependent upon who you ask the current record holder might be a 49-pounder (22.3 kg) that lives in the US or a 55-pound (25 kg) galoot who lived in the UK (last anyone heard from him). Both of these exceed 4’ (1.2 m) in length.

“Is that Your Final Answer?”But those ’roided out rabbits are exceptional.  Normal weights range from 15-25 pounds (7-11 kg).  That’s still a lotta bunny to love, and because of that, my wife and I obtained one of these recently.

He was once the host of a popular game show called Who Wants to Be a MillionHare.  [OK, I’m gonna ’fess up—I stole that gag from one of my Facebook friends.]

He is a six-week-old light grey Flemish Giant (although thanks to poor camera work on my part he looks sandy colored).  At six weeks, he weighs seven pounds (over 3 kg).

The Flemish is sometimes called the “gentle giant” because of its extremely docile personality.  “Docile” is a euphemism for “lazy”—we learned the Flemish is considered the most slothful of all rabbit breeds.  This was clearly in evidence on the first night we brought him home.  After he explored for a bit we put Regis Philbun on the sofa with us; he alternately curled up against us, snuggling in, or splayed out on a couch cushion as if he owned the place.  [I will refer the jury to “Exhibit A”, the photo that opens this article.]

Room to Sprawl, Sleep, Poop, and Play     A well cared for rabbit of any breed can live for many years.

The diet for Flemish Giants is the same basic ingredients as for other rabbits except MORE!!  It is not recommended to feed them on a fixed schedule, though; rather, they should have access to hay (timothy or orchard grass) and food at all times.  This means using a feeder with a hopper.  That way your fluffy fatso can eat to his or her heart’s content.  And keeping hay available is crucial to their digestion (not just for the Flemish, but for all bunnies).

Greens are good for them (with spinach and kale to be given only sparingly, and never give them iceberg lettuce—it is too watery and promotes diarrhea).  Treats high in sugar, such as bananas or apple pieces, should be given fresh, but in moderation.

Fresh water—and plenty of it—is a must!  These big breeds consume large volumes daily (and Regis drinks like a camel after a trek through the Gobi).

Flemish Giants are big eaters.  Recommendations for optimal daily feeding are around two cups of chopped leafy vegetables for each six pounds (2.7 kg) the animal weighs.  Two tablespoons per the same six pounds of weight of carrots or fruit is the maximum allocation.  [Although it’s hard not to want to give treats, they love it so much; you must resist the temptation to overdo that part of their diet.]

Because of size most Flemish house rabbits are “free range”.  This means they are litter trained (have easy access to a litter pan), and their “output” is prodigious, so keep the pan clean!  They should be kept in a large penned-off area, a good-sized dog crate, or a bunny-proofed room during down times when they can’t be properly supervised around the house.  Interestingly enough, the US Department of Agriculture has standards for animal housing!  Go figure.  Anyway, they say that rabbits over 12 pounds (around 5.5 kg) must have at least 5 ft2 (roughly 1.5 m2) of floor space.  This area should be increased proportionately as the bunny gets bigger.  And Flemish Giants may take up to two years to reach their full size.  To meet that “housing” need my wife and I purchased a standard, old-style wooden children’s playpen (from Goodwill) for “Reege” (he lets me call him “Reege”; we’re tight like that, yo).

He has a litter pan in there, a box to hide in, his food bowls (one for hay, the other for dry food), and a water bowl.  His litter pan contains pulverized corn cobs (there is also a litter on the market made from ground up newsprint that is bunny safe).  Do not use regular kitty litter, cedar chips, or anything that has small particulate—a rabbit’s lungs are fairly delicate, and they can get respiratory problems from breathing in too much dust.  And though Regis uses the litter pan (mostly) he tends to play in it, too, kicking things around like so much confetti.

In Regis’ case, he is very messy.  The two smaller rabbits we have (our Netherland Dwarf, Christopher Hoppen, and his cell mate, Nancy Bunatra, a Mini Satin) bounce around and play, too, and make messes, but theirs are small messes.  Reege is a bit clumsy—he steps in his water bowl (and doesn’t seem to care) throws things around and galumphs along like a drunken airline pilot on a three-day layover.  He is not graceful at all.

In many ways he is like a lap dog.  [And he gets along with our dogs: three chihuahuas—all of which are terrified of him—and a miniature pinscher that finds Regis Philbun fascinating.]  He enjoys being held and likes being close to my wife and me.  He does the typical bunny things: climbs on the back of the couch, gets in your hair, sticks his face right in your face and licks your nose, and toboggans down your shirt front (if he is on your shoulder while you’re sitting).  At seven pounds (now) some of his thumping around can be a bit “oomph” inducing.

AUTHOR’S UPDATE: Just to show how large these bunnies can get, and how quickly, after having Reege for about a month, weighing him on Dec 11, 2014, showed a gain in over six pounds from when my wife and I first brought him home.  He weighs in as of that date at 13 pounds, 6 oz (over 6 kg!).

FINAL UPDATE: It is with sadness beyond description that I must report that our funny, 50-pound, “little” guy, Regis Philbun, died this morning around 9:20 AM, March 14, 2016.  My wife and I are both devastated as Regis was quite the character.  While we will probably get another Flemish Giant soon this newer bunny will certainly be nothing like Reege—he was the smartest rabbit I ever owned or met. 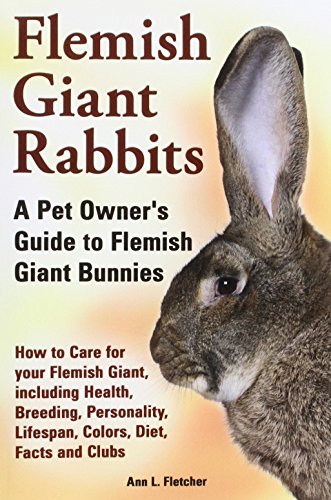