Of all the bunnies I have owned over the past few decades there’s a new kid in town that is feisty (to the point of being annoying sometimes), but personable and pretty.

These bundles of unbridled energy are the Mini Satins, a breed that (while in development since the 1970s) did not get recognized with its current standards until 2005!

New Bunny on the BlockRabbit hobbyists and serious breeders alike always seem to be tinkering with Nature when it comes to bunnies.  By cross-breeding to enhance certain mutations (for example, shorter ears or certain colorations) new types are continually coming to the fore.  Of them, many achieve a standard state, meaning a consistent body shape and coloration can be expected from a litter.

In recent years, crossing a miniature Swiss Fox bunny with a Netherland Dwarf resulted in a mutation, a wooly mane around the neck of the animal.  This gene was isolated and then specifically sought with continued breeding.  The resultant rabbit was dubbed the Lionhead because of its wooly mane. Though around for over a decade, and accepted into shows as a distinct breed by Britain in 2002, it was only in 2014 the Lionhead was allowed to “compete” in shows as a recognized breed for the US’ American Rabbit Breeders Association (ARBA)

Similarly, there has been a trend toward “miniaturizing” many popular breeds.  The Satin rabbit, named for its satiny smooth coat, has been a favorite among pet owners for decades.  These rabbits are among the larger ones, ranging in weight from 9 pounds (4 kg) up to 11 pounds (5 kg).  That’s a lotta bunny to handle and take care of!

In the late 1970s, though, a Michigan woman decided to try her hand at reducing the Satin’s size into a miniature version.  She experimented by crossing a standard Satin with a Polish (pronounced like the word in “shoe polish”, not like the word for natives of Poland). Eventually she was able to bring the bunny down to roughly half the weight of its namesake, and she called the result the “Satinette”.  Interestingly enough, she abandoned her pursuit in 1982 and the stock she had developed simply disappeared.

In the 1980s a man tried to create a “satinized” miniature by crossing a Satin with a Netherland Dwarf but with little success.  A couple of other breeders hooked up with this man to help in 1990.

And if you think the world of corporate America is mysterious when it comes to product development homespun “bunny geneticists” are just as oblique.  Also in 1990 another Michigan hobbyist was found who had a herd of mini Satin rabbits.  He called them Satinettes, as the Michigan woman from the 1970s had done, but he claimed he had invented the name himself.  Furthermore, he refused to tell from where his herd stock had come (it didn’t appear as if he had bred them himself, and they may have been from the Bermuda Triangle Bunnies, the ones that had “disappeared” after first being bred by the Satinette’s originator).

Meanwhile, the group who had been breeding Netherland Dwarf rabbits with the Satin had a working model finally but gave up the pursuit in 1994.  Their stock was sold to another breeder who thought they were too tiny, closer to satinized dwarf rabbits rather than a “mini”.  He, in turn, did more breeding to raise their size up from dwarf status to the mini standard (a bit larger).  His efforts led to an acceptance at an Indianapolis rabbit show in 2005 when a judge allowed his entrant in as a Mini Satin, a new breed.

Energizer BunnyRegardless of origin the Mini Satin line is interesting in its colors.  The currently accepted ones for showing are mostly solid: chinchilla, opal, red, and white, with a “Siamese” color pattern (colored muzzle and highlights) being the current exception to the solid rule.

Breeders, though, have been selling other variants to the public: black, blue, chocolate, copper, gold-tipped black steel, Himalayan, otter, and silver marten.  Other newer, and increasingly common, markings are “broken”, Rorschach-like splotches on the face and ears, with some seemingly random spotting along the back and sides (and the spots can come in any color noted above).  Efforts are being made to get these alternate colors recognized as acceptable for showing as well.

These rabbits tend to have more longish bodies, with mostly egg-shaped or otherwise elongated heads and faces.  They average around four pounds as adults (just a bit under 2 kg), and their ears (for shows) cannot be any longer than 3.5” (close to 9 cm).

Temperamentally, these rabbits are extremely rambunctious!  While not terribly aggressive they tend to border on manic hyperactivity, and in show environments it has proven difficult sometimes to “pose” them (getting them to sit still) on a show platform so they can be examined and judged.

And that energy level abates very little; as rabbits tend to be nocturnal, the owner of any Mini Satin may find a lot of thumping and bouncing around at night, slinging of toys, and general mayhem!

Dervish CareMini Satins don’t have any special dietary needs beyond what other domestic rabbits require.  This means a diet rich in vegetable matter, usually the standard timothy or alfalfa pressed pellets with seed mixtures thrown in for variety.  A sampling of hay (either timothy or orchard grass) is good for them, too.  Fresh carrot pieces, kale, and the occasional piece of banana make good treats.

A cautionary note here: too much alfalfa-based foods can cause their urine to turn milky white and is not good for them.  If their primary food is alfalfa based, then this should be supplemented with a smattering of timothy hay or some other dried, rabbit grasses to offset the alfalfa.  [And don’t get the wrong idea—alfalfa-based foods will not kill rabbits, it is among the things they eat in the wild.  They merely need a balanced diet, that’s all.]

Bunnies also need fresh water, and plenty of it!  [I saw a statistic that rabbits can consume as much water in a day as a small dog.]

Also, to insure longevity, these rabbits should be kept indoors, with an adequately sized crate or hutch, keeping them from overexposure to sun, heat, and wild fluctuations in temperatures.

They do, however, need playtime daily outside their cage.  But, bunnies are as curious as cats and they do get into things they shouldn’t if they aren’t properly supervised.  And unless you literally have eyes in the back of your head, or are willing to stand guard over them while they are out running around, it is best to have a large area sectioned off that has been “bunny proofed” for them to play in.

Bride of BinkensteinBunnies can express themselves in many ways: they play, they relax, they get into things.  And, despite what you may believe, bunnies make vocal sounds.  They may grunt in disapproval at something (such as being put away when they want to stay out and play), and they also make “chirping” and little “whistling” sounds.  They can also scare the literal crap out of you with a blood-curdling scream of alarm (extremely rare, I’ve only heard it once in my life many years ago, but if you’ve ever heard it, you’ll never forget it).

Overall, though, they are quiet animals except for one thing.  One of their funnier behaviors is what is called a “binky” or “throwing a binky”.  This is when a rabbit is either upset about something or thinks attention needs to be paid to it.  This little tantrum may involve throwing toys around, tossing or otherwise upsetting food dishes, kicking over water bowls, stamping their back feet, and generally making a tremendous racket.

Credit: Vic Dillinger; Oct 27, 2014Meet Nancy Bunatra.  She is named for singer Nancy Sinatra, but because our Nancy’s a bunny, her boots were made for hoppin’!  Her “speaking” voice, when she “talks” to either my wife or me is that of a New Joisey goil, straight from the Shore.  [I do the voice for her.]

Nancy is a broken chocolate Mini Satin, meaning she has the markings on her face like Rorschach from The Watchmen, with some spotting on her body and with colored ears.  And while she is adorable she is a little hell-spawn.  She is not bad; she is just so energetic she seemingly never rests.

She is also the binky queen.  She lives with a neutered male Netherland Dwarf named Christopher Hoppen (who “talks” like Christopher Walken—I do his voice for him, too).  And because she is about twice his size she sometimes dominates him by humping his head or pinning him down to groom him or chasing him around.  To escape from some of her more unwanted attentions he will hide out in the little wooden house in their cage and will head-butt her to keep her out of it.  She is not hurting him and they play together very well; they do not bite or claw each other, and they sleep snuggled up together (that is, when Nancy lets him sleep).

However, Nancy mostly won’t sit still.  She will let herself be held (for a short time) but she is always more interested in getting away and exploring.  She is also very brave and doesn’t hesitate to jump off the sofa (if we have her out sitting with us).  Or, she’ll try to climb the curtains.

She also hates closed doors—we have a long hallway set up that is bunny proofed and when she and Christopher are out playing in it, the doors to the adjoining rooms are closed.  Nancy will stand up and claw the doors and generally just give herself fits trying to get into the other rooms.  She usually stops after a fashion, though.

In the mornings around 8:30 AM and again around 10:00 PM (standard feeding times) she starts winding up for a full-on, pre-feeding binky.

When we bought her (for $50) she was about six weeks old, the earliest recommended age for leaving the mother.  [She is five months old as of this writing.]  She was bought from a reputable breeder who explained she was a newer type of bunny (I had never seen one before).

When we brought her home she was very tiny and toy-like, and Christopher seemed like a giant in comparison to her.  Now, she looks like a big lug (at least next to her dwarf friend, Christopher, but she is around four pounds, just right for her breed).

Mini Satins (while good pets for adults who can handle them) are not irascible but their excessive and seemingly boundless energy would not make them a good pet for small children.  Christopher, for example, will perch on my wife’s shoulder for an hour or more and never move.  Nancy, in direct contrast, will bounce on you, climb up your shirt, perch on your head, nibble at your hair, run away, come back, stick her bunny face right in your face, and chew on your clothing.  She needs a LOT of supervision when not in her cage!

But I will say this: she has personality to burn and for all the harassment she throws Christopher’s way he is very attached to her and she to him.  And she keeps things interesting. 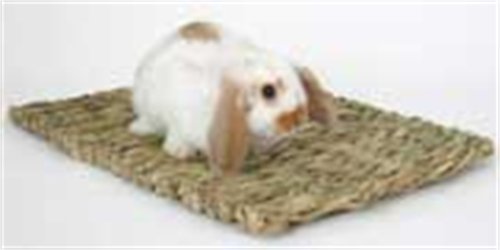