You might have probably heard this for over a hundred times that Nepal is the country of Mount Everest, and it is the roof of the world, it is in the lap of Himalayas... and hundreds of what nots! But those are the real and normal facts about Nepal, but have you heard what's unique, interesting and weird about this beautiful country?

1. Everyone lives without electricity for half a day!

Candles, oil lamps and lanterns are common in Nepali household.

The demand of electricity is so much more than the production that the people of Nepal are forced to live without power for as much as 16 hours per day during the peak season. The country largely depends on hydroelectricity as the only source of power. When the water level falls during the winter season, the generation is less than fifty percent of what was being produced during summer and the monsoon. To add more insult to the injury, winter is the time when the power demand surges due to more heating and lighting requirements. Total insanity!

Currently, the "load shedding" is 8.28 hours per day on average. The Nepal Electricity Authority (NEA), that regulates the distribution of electricity in the developing country of Nepal, revises the schedule on a semi-regular basis.

You're buying this fact, right? Because, yes - it IS a fact. No matter how rich or poor you are, you are only supplied power at designated times. Unless you have your own means of generating power (diesel generator, solar, wind), you are in total darkness! It might be until late 2016 that this problem will be solved when Upper Tamakoshi hydropower plant comes into operation[1].

The reason behind this?

2. Nepal has over 6000 lakes and fresh water rivers

Yes, those are women lining and crowding up to fetch water. Some even brush their teeth, bathe and wash clothes near the well.

On average, water is supplied through the installed pipelines for only 4 days in a week (on average) and for just 2.4 hours[2] on those designated days too. It is common to find people using reserve tanks to store water for the perilous times. We have a 8,000 liters reserve underground tank which is enough for my family of five for a full month.

Attached below is a video that shows the burden Nepali women have to bear for fetching water.

Women are responsible for getting water

The condition of remote villages in Nepal is so miserable. They don't have pipeline and people are still unaware about gender equality, discrimination and domestic violence. Women are held responsible for everything.

3. Nepal is a top tourist destination, but Nepal Airlines doesn't have planes!

Despite being a popular tourist place, Nepal does not have enough of its own national aircrafts. The national carrier, Nepal Airlines, only has 2 long haul airplanes which are more than 30 years old. These two Boeing 757-200 aircrafts only serve Asian countries and on peak tourist routes like Bangkok, Kuala Lumpur and Doha. However, Nepal Airlines does have over 95% punctuality[3] on its flights. Guess you've got to be punctual when you can't do enough shifts!

Airlines from other countries do connect Nepal, but the lack of a national carrier has led to significant expensive airfare for tourists visiting Nepal. Nepal is still not directly connected to the United States, Africa, Australia, South America and the western Europe. The farthest connection from Kathmandu on the east is Seoul (South Korea) and on the west is Istanbul (Turkey).

How far can you fly from Kathmandu?

Hugging each other is okay (but still strange). But publicly kissing and activities of public display of affection is not only frowned upon, but will land you in police custody. Even Valentine's Day is not an excuse! It is worth knowing essential safety tips for traveling Nepal.

Nepal is still a developing country, not just from the point of view of infrastructure and luxuries. People are traditional and conservative, with over 80% following the ancient religion of Hinduism. Don't get us wrong - we watch Hollywood movies with PDA (and not-so-PDA) scenes and we are okay with it. But we're quite not in the place where we're okay with seeing a couple kiss in public.

FYI means "For Your Information"

5. Nepalese have ONE national food

Photo by: Shoestring via Wikimedia Commons

And the day gets weird if we skip it. The food is dal-bhat-tarkari, which means dal (lentils), rice (bhat) and a vegetable (tarkari). I have never met a Nepali family that doesn't consume dal-bhat-tarkari without missing a day. Some families never miss a meal too and they have it two times daily as lunch and dinner.

Nepalese generally eat vegetable curry like gundruk, but it can be any veggie or even meat curry and gravy. Mustard greens, leafy greens like spinach, kale, gardencress and cauliflower is more common than any other vegetable, with radish pickle and tomato chutney (sauce) on the side.

6. Nepal is only slightly larger than Alabama and Arkansas.

But it is much smaller than Georgia and Florida. However, almost 13,225 people live in a tightly packed square kilometer in the metropolitan city of Kathmandu. What's more interesting is that in a western district Manang, only 4 people live per square kilometer![4]

This beautiful Manang valley has no roads worth driving!

Despite being a small country, Nepal has much more to offer than several large countries. There are beautiful sceneries that will melt your heart. There are the highest points on earth and also the deepest valleys. There are over 120 Hindu temples in Kathmandu alone and over 300,000 small and big temples, monasteries and stupas. It is the only place in the world where the UNESCO World Heritage Sites are just within 15 km. That's why, Kathmandu is also called the city of temples.

7. Nepal and Portugal are twins!

If the map of Nepal is turned 90 degrees clockwise, it is literally the same as map of Portugal. This can be a very interesting question in pop quizzes and is asked frequently in general quiz contests in schools. 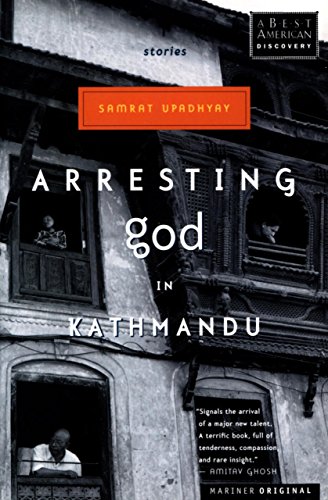 Arresting God in Kathmandu Amazon Price: Buy Now(price as of Jul 31, 2016)
Do you think arranged marriages are weird? Do you believe in love before marriage or marriage, then love? In Nepal, what happens is you are at the mercy of the society and people around you for getting privacy. This collection of 9 short stories perfectly shows the changing viewpoint of a "traditional Nepali" as he battles through his relationship. A must read. Rating: 4.5 stars

The Mount Everest,  with its sister mountains Lhotse and Nuptse. As seen from a mountain flight to the Himalayas.

Out of the top 10 highest mountains in the entire world, 8 are in Nepal. What's more? All of them are more than 8,000 meters high. The tenth highest mountain in the world is the Annapurna I, which stands 26,545 feet tall.[5]

Saugat Bista, 8, is all set to place himself and Nepal in the Guiness Book of World Records. It might sound unbelievable, but it's actually true. He has directed a 2014 movie called "Love You Baba" (which means, Love you Dad) - all from scratch - just him.[10]

The movie stars his own father and his own sister, and is the story of love between a father and a child without her mother. The story, as put by the pop culture websites, is a family drama with ups and downs in the relationship between a father who is doing everything to fulfill the wish of his motherless daughter.

What it feels like to work with a child director (video)

The actors share their experiences working with an eight year old child director.

"He notices even the small details we professional actors tend to miss. He is a very talented director in the set, but outside - he turns himself into this one innocent typical 8-year old kid." - Basanta Bhatta, Actor

Do you happen to know a weird fact not mentioned here? Have something to say? Drop them in the comments!