As well as being an avid writer, I am also an enthusiastic gamer, anime fan, movie buff, and love of all things strange. Being as I live with a boyfriend, I am also particularly knowledgeable about cleaning and cooking. You can join me in my adventure of writing for money here at Infobarrel. Sign Up today! Also, I wrote a book! Check out The Guild today!
InfoBarrel is a writing platform for non-fiction, reference-based, informative content. Opinions expressed by InfoBarrel writers are their own.
InfoBarrel > Health > Diseases & Conditions

Understanding the Problem - What Causes Dandruff?

It's white, it's flakey and it's not snow. It is dandruff, the embarrassing white flakes that permeates and ruins nice hair styles and shoulders of t-shirts everywhere. Those flakey bits of dead skin are utterly harmless; however they are embarrassing and occasionally itchy. The uneducated masses think dandruff is caused by being dirty, thus it is frowned upon. However, dandruff isn't about your hair, or how clean it is. Instead, it is about the skin on your scalp.

Dandruff is dead skin cells and that's all they are. The major problem with your body when you have a case of dandruff is that skin cells are growing and dying off too fast. The dead cells are expelled from the scalp in the form of the flakey white snow that everyone is familiar with. So yes, everyone has dandruff, it is just worse in some. For most people, their dead skin cells are done away with when they wash or brush their hair. However, when they grow and die off too fast, they become impossibly to keep up with.[1]

The answer isn't to wash your hair more, it is to find out what is causing it and treat that problem instead.

Contrary to the popular belief, dandruff isn't caused by the scalp being too dry. A dry scalp would be itchy, but it wouldn't shed skin quite as bad as dandruff. As to what actually causes this affliction, there are a number of different reasons that people may develop cases of bad dandruff or even have it chronically.

For those that experience frequent dandruff that appears in large clumps, their dandruff is likely caused by Seborrheic Dermatitis or Seborrhea. This is actually what doctors refer to chronic dandruff as. Worse yet, doctors aren't exactly sure what causes it. However it is, surprise, surprise, linked to the causes of normal dandruff.[2]

The scalp, even though protected by hair, is actually quite sensitive. For those that experience minor to moderate dandruff, consider looking to your hair products as the cause. Most hair products have a whole army of chemicals that can cause the scalp to flake due to sensitivity or an allergic reaction. Sometimes these reactions can start suddenly to products that you have used for years. Consider switching hair products like shampoo, conditioner, hair gel, hair spray, or mousse out with another product or stop using them one at a time. This will help rule out whether or not another condition or just the chemicals in a certain product are causing the condition.

Occasionally, some will hear that dandruff is caused by yeast, making it a form of yeast infection. In some cases it is. However it is not the Candida fungus found below the belt that cause these flakey episodes but rather the Malassezia fungus, which is a different form of yeast.

Like Candida, Malassezia occurs naturally through the oils emitted from the scalp. For some, it irritates the scalp causing increased skin cell growth. It is unknown why is causes such reaction in some people. However, the reaction can also be due to an increase of this natural human body flora, which can be treated with the right medicated shampoo.

Nizoral AntiDandruff Shampoo, 7-Ounce Bottles Amazon Price: $17.17 $14.19 Buy Now(price as of May 31, 2015)
Not your average Head and Shoulders of Selsun Blue. Nizoral is specifically aimed at treating the fungal cause of dandruff.

Dandruff isn't always a medical condition. When those flakes start showing, try considering what is going on at the time around you. This condition can be caused by external factors like extreme heat or cold. For most people, it usually acts up in the winter when the scalp gets too cold. This has led to the popular theory that dandruff is caused by dry scalp as the air is considerably drier in the winter than in the other months.

This condition can also worsen around times of stress. Stress tends to make almost all health conditions worse. Unfortunately, external factors like weather and stress are harder to treat, near impossible in fact. The best thing to do is work out what dandruff solution works for you and stick with it.

For those that have dandruff that just won't go away and nothing seems to help it, it may actually be caused by Psoriasis. Psoriasis can be minor or can be even more unsightly that regular old dandruff.

Signs of Scalp Psoriasis include:

Doctors have no tests that will be able to tell the difference, most will make a decision based on what they see. However, there are topical treatments that help treat this condition.

Those who have had Eczema outbreaks before will know them when they see them. However, for those that have never had one, it can look a lot like really bad dandruff save for some key differences.

Aside from a red, scaly, itchy scalp, Eczema can present itself with:

This isn't one of those things that you usually can ignore and it will go away. If left to its own devices, Eczema can be unsightly and in a very permanent way. Doctors can treat it quite simply with topical treatment much like Psoriasis. 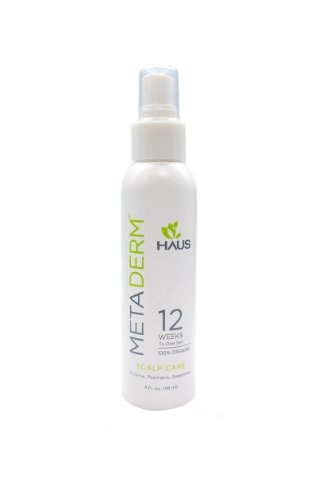 MetaDerm Scalp Care Eczema, Psoriasis, Seborrhea Soothing Spray (32 oz) (4 oz. Spray Bottle) Amazon Price: $19.99 $13.99 Buy Now(price as of May 31, 2015)
Doesn't heal dandruff, but it does calm the itching and the desire to pick at your scalp. It's organic so it can be used with other treatments.

The key point here is that if over the counter or natural treatments for dandruff don't seem to be work, go see a doctor. Dandruff is a major self-esteem crusher and some of the worse medical conditions that cause it can be disfiguring. Don't let such a simple thing ruin you forever.