I'm the man who's gonna be King of the Writers!
InfoBarrel is a writing platform for non-fiction, reference-based, informative content. Opinions expressed by InfoBarrel writers are their own.
InfoBarrel > Entertainment > Film

What Digimon: The Movie Should Have Been

Everything about this is awesome!

The film Digimon: The Movie was released in 2000 in the United States. Unlike it's awesome TV counterpart, this movie received negative reviews from even the most avid fans of the show. Fox was trying to capitalize on the success of Pokemon: The First Movie, and did so by splicing together footage from the three existing Japanese Digimon films at the time (none of them were theatrical length) and giving them a loose overarching plot to tie them together. The result was an embarrassing horror of epic proportions; the shameless money-grabbing nature of the Pokemon franchise Digivolved to Mega level proportions.

What makes this such a shame is that unlike Pokemon, Digimon was never about collecting them all. The show featured a rich cast of characters embarking on an epic quest to save two worlds, but first having to survive on their own and each other. The movie instead featured an Angela Anaconda tie-in intro (who is Angela Anaconda? Honestly, I really don't remember), a Smash Mouth soundtrack, and a torrent of poop jokes. Oh, and a Digi-Rap by............M.C. Pea Pod? Who the.......nevermind. I don't want to know.

But this isn't a review of a terrible movie. You got Rotten Tomatoes for that. Personally, I couldn't even sit through the whole thing. But watching the bulk of the second part of the movie (featuring the cast from the first season), I could only wonder what could have come about if Digimon: The Movie had been given the proper treatment.

Rather than us simply watching two of the show's eight main characters watch their Digimon partners fight some random villain, I imagine a more character-driven story where the DigiDestined have drifted apart ever since they got back to Earth and it's up to the protagonist, Tai, to reunite everyone in order to stop the newest threat. Bonus points if the group didn't just drift apart, but completely fractured due to a major falling out and even more bonus points if Tai was the cause. In the show, you had eight very diverse personalities (sixteen if you include their partner Digimon) each playing off each other in some way. The show was just as much about the tumultuous character dynamics as it was about evolving monsters that fought each other. Perhaps the villain, a Digimon infected by a virus who now goes by the name of Diablomon (not Diaboromon), is targeting Tai specifically, and he has to work through the issues and tensions that drives each of the characters and reunite everyone for the final showdown.

The actual movie had so many good ideas: An evil Digimon that took over the entire Internet, shut down the phone and Internet lines (which is really modern civilization as we know it), and launched nuclear weapons at Colorado and the neighborhood in Japan were Tai and fellow DigiDestined character Izzy lived. Imagine if they had built on that. Diablomon (an already awesome villain that sends rambling emails and creepy phone calls to whoever he wants) shuts down all forms of communication, leaving the DigiDestined barely able to communicate, let alone work out their differences and coordinate an attack. With computer systems worldwide shutting down, the modern society is on the brink of collapse. As the DigiDestined reunite and send their partner Digimon into the final battle (in their Mega and Ultimate forms, no less), Diablomon taps into the world's military networks and launches all the world's nuclear weapons.

Now for everyone who saw the Digimon movie and wished it could have been something more, wouldn't that have been an epic film? The Digimon TV show has been unjustly criticized for ripping off of Pokemon when it has always striven to be so much more. With villains that live in—and can affect—our computers and data systems, our information and network-driven society have always been what was at stake in the show even if that was rarely ever pointed out. And despite the high stakes, the show was always about the characters; the kids weren't just there to collect the monsters, but rather they and their fears and motivations served as the driving force of the show. If Digimon: The Movie could have been that rather than about action figures transforming into bigger action figures, I think the franchise could have been as big a success as Pokemon, rather than an embarrassment that fans still find themselves defending today. 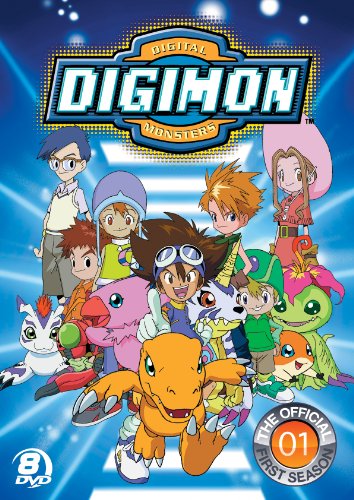 Digimon: Digital Monsters - The Official First Season Amazon Price: $34.00 Buy Now(price as of May 24, 2016)
Definitely worth checking out. The first season of the show, which had the most well known and relatable cast.
Next >> Movie Review: The Girl on the Train