This article was written by Cheryl Weldon, MA.  If you would like to read further writings by Cheryl visit her website:  www.cawworldwide.com Infobarrel is a great place to publish your work and has a wonderful community of writers.  If you would like to wite for Infobarrel sign up here. (you also need an account to comment on articles, so sign up now and let us know what you think about what you're reading.)
InfoBarrel is a writing platform for non-fiction, reference-based, informative content. Opinions expressed by InfoBarrel writers are their own.
InfoBarrel > Health > Diseases & Conditions

What Happens When Cujo Bites: The Low Down on Rabies

From “Old Yeller” to “Cujo,” dogs foaming at the mouth are the first one thinks of when hearing the word “rabies.”  Other animals, such as bats and various wildlife critters are carriers of the disease as well; we just don’t think about them as much because we don’t have as much contact with them as we do the beloved pet.  However, it is true the majority of the cases of human deaths caused by rabies come from a dog bite. [4] What is this dreaded disease that strikes fear in humans?

The virus can infect both domestic and wild animals that then spread the disease to humans.  The animals that transmit the disease in the United States include skunks, foxes, bats, raccoons and coyotes.[3] Rabies is not content to just show up in the U.S however, it is evident on every single continent on earth except the Antarctic.  More than 95% of the over 55,000 people who die from rabies every year occur in Asia or Africa.[4]  In the United States and Canada, rabid bats are the leading cause of deaths by the disease.[4]  Most deaths are children under the age of fifteen.[4]

Once the virus enters the body, it multiplies rapidly in nerve tissue, especially the brain tissue.  It proceeds from the site of entry along the nerves until it reaches and infects the brain.  Treatment is designed to interrupt and kill the virus before it reaches the brain.  Once the virus enters the nerve cell, it develops replicating sites which produce new viruses and spreads to other body sections and spreads to other animals through the salivary glands.  The life cycle of the virus is not complex. The virus replicates and is transmitted to another animal via a bite where it replicates in the bitten animal that in turn bites another animal.  When a human is bitten, the cycle doesn’t usually continue as humans rarely transmit the disease to another human.

What is the History of the Disease?

There are early documents recording rabies as far back as about 2300 B.C.  The early writings

Credit: Source: Wikimedia Commonswarn owners of rabid animals not to get bitten by them and for many centuries it was common practice to put down the animals showing symptoms of rabies.

Girolamo Fracstoro, an Italian physician was one of the first to actually study the disease.  He concluded it was a disease transmitted to humans who had direct contact with the saliva of infected animals.  He is credited with naming the disease “rabies.”[2] In 1895, Louis Pasteur and Emile Roux studied

Credit: Source: Wikimedia CommonsFracastoro’s data and produced a vaccine for the disease.[2]

In the United States the last 100 years have seen a dramatic change in the incidents of rabies.  Before 1960 the majority of reported cases were due to domestic animals, but now more than 90%  of the cases reported to the CDC (Center for Disease Control & Prevention)) are caused by wildlife.[1]  Most deaths in the United States today occur when people don’t seek medical attention.

What are the Symptoms of Rabies?

The incubation period for rabies is one-three months.[4]  The first few days after being bitten by an infected animal, the symptoms are similar to the flu.  An infected person may experience general weakness or discomfort, headaches and a fever.  The wound site may have a prickling or itching sensation.  Days later, the symptoms advance to:[1]

As the disease progresses the infected person may experience:[1]

After two-ten days, the acute period of the disease typically ends.  Once the clinical symptoms of the disease appear, it is almost always fatal.  The CDC reports only ten cases of survival as of

Credit: Photo courtesy of the CDC, Source: Wikimedia Commonsthe year 2012 and most of these survivors had some form of pre-bite treatment.[1]

There are two forms of rabies which can occur.  People with furious rabies exhibit signs of excited behavior, hyperactivity and hydrophobia.  In a matter of days, the person will have a cardio-respiratory arrest resulting in death.[4]

About 30% of the infected people will have paralytic rabies which is less dramatic and usually takes longer for death to occur.[4]  The muscles gradually become paralyzed, starting at the wound site.  Coma develops and eventually the person dies.

Rabies in a human

What is the Treatment for the Disease?

Whenever a person is bitten by an animal it is advisable to immediately wash the wound with soap and hot water for at least 15 minutes.  Treat the wound with povidone iodine or other virus killing substances.[4]   If it is a wild animal or an domestic animal that is unknown as to whether or not it has gotten a rabies shot, it is advisable to seek medical attention right away.  Treatment is the same for all age groups.

In the United States the CDC recommends the following regimen of treatment for those who have not been previously vaccinated: [2]

Credit: Source: Wikimedia CommonsThose who have had previous vaccination against rabies are not given the HRIG and only given vaccine on days 0 and three.[2]  HRIG is used because it immediately attacks the virus and slows or even stops the progression of the virus along the nerves.  The vaccine is used to stimulate the immune system to make the body develop enough response to eventually kill all of the virus in the body.

Treatment within the first 48 hours after being infected are crucial to full recovery from the disease; however, even treatment after that may be at least partially successful.  As previously stated though, once the clinical symptoms of rabies appear, the chance of survival is slim. At that point, any treatment provided is solely to support the comfort of the patient.

How is Rabies Prevented?

By far the best way to prevent rabies is to have dogs vaccinated yearly since globally, dogs are

Credit: Photo courtesy of the U.S. Navy, Photographer: Mass Communication Specialist 3rd Class Bryan M. Ilyankoff, Source: Wikimedia Commonsthe main source of rabies transmission.[1]  Keeping domesticated dogs away from possibly infected wildlife is another measure owners can take to prevent the virus.  In the United States, dogs (and other pets) without a vaccine certificate and that bite a human are at risk of being euthanized or impounded.  In addition the owner may be subjected to fines and/or lawsuits.

People should avoid any animal acting strangely and be wary of stray animals in general.  If a bat makes its way into the home during the night and is found the next day, it is advisable to see a doctor.  Bats can bite a person without his or her knowledge (if person is sleeping) and transmit the disease.

Populations working in high-risk occupations are advised to get pre-exposure immunization.

Credit: Photo courtesy of the U.S. Navy, Photographer: Mass Communication Specialist 3rd Class Bryan M. Ilyankoff, Source: Wikimedia Commons These occupations include lab workers who are around live rabies virus, wildlife handlers such as zoo workers and any professional who is in direct contact with bats, carnivores or other mammals in affected areas.

In addition, another way to prevent rabies is by improving the access of medical care in many areas of Asia and Africa as well as other rural areas across the globe. Children are at high risk for animal bites and educating them as well as providing quick medical attention could save their lives.

The copyright of the article What Happens When Cujo Bites: The Low Down on Rabies is owned by Cheryl Weldon and permission to republish in print or online must be granted by the author in writing. 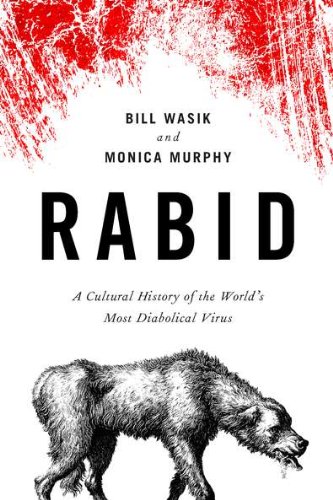 Rabid: A Cultural History of the World's Most Diabolical VirusAmazon Price: $25.95 $6.98 Buy Now(price as of Sep 9, 2013)
Next >> Zika Shrivels Testes, Drops Testosterone, and May Cause Infertility