What does not kill me makes me stronger!
InfoBarrel is a writing platform for non-fiction, reference-based, informative content. Opinions expressed by InfoBarrel writers are their own.
InfoBarrel > Technology > Mobile > Cell Phones

What To Do With Your Old iPhone

It seems like Apple is coming out with a new iPhone every other year. But - oh well, it's nothing less festive than the holiday season. Long lines, excitement, crowd, money - it's that time of the year again! By the time you get used to one phone, it's time to upgrade to another. The good news, however, is that those unused smartphones that just lay around the house in your bed or in your drawer, may in fact have a useful purpose! In this article, we are going to look at some of the most popular methods!

1. Turn it into an iPod Touch

Why not turn that used iPhone into a slightly thicker iPod Touch? That iPhone can still connect to Wi-Fi and run iOS applications. In fact, if it's an iPhone 4S or later, it will be able to upgrade to the new iOS 8 operating system.

This method is the most convenient (and expensive, though!). This way, you can manage your accounts and works in two different phones. It is also best if you are looking to separate your personal/home use and office use on your phones.

2. Return it to Apple or your Phone Carrier

Apple has a “Reuse and Recycling Program.” Just bring in your used iPhone, and they will provide you with an Apple gift card that can be applied to the purchase of your new iPhone or its accessories.

Phone carriers also have trade-in programs. Companies such as AT&T, T-Mobile, and Sprint will pay you in store credit for your used phones. An iPhone 5s in good condition is known to sell around $225. However, this price is largely based on the market situation. If you think it is not enough and/or you want to use the money in some other places, you can try further options like selling it directly. That way, the money can be used for buying the new iPhone 6 whenever OR if you want to buy it.

3. Trade in at Amazon

This is similar to selling to a third party or returning it to the Apple store for a gift card. However, since Amazon is such a big platform and you can buy anything from there, this might be a good option for you. Older models can give you a whopping $300 Amazon gift certificate, which is much more than what Apple would provide.

You get paid to put the Apple back into the tree at Amazon!

You can also try selling your old phone instead of trading it in. Amazon's sellers central marketplace caters to huge mass and you can set your own price instead of accepting what Amazon is offering for the trade-in. This way, you can get cash instead of Amazon's gift card. Also don't forget that Amazon is a global website and you can have the phone shipped to worldwide (if you choose). There are countries where users pay ridiculous price for having an iPhone and if you've got the 5S or 5C model, you can get a good return on it.

One downside I see with this option is that you have to take care of the shipping. To make the most out of this option, take this as an opportunity to provide different kinds of shipping options and not just standard and express.

Offer options to track the mail (an iPhone IS really expensive and would be devastating for both buyer and seller if it gets lost in the mail). See if Fedex or DHL is available in your area because they cover more countries than UPS and TNT.

The trade-in program at Amazon is evergreen

So don't panic if you're late

Keep your eye open for announcements from your phone carrier. Selling plans on new generation of iPhones is one of the most profitable ways your carrier makes money. They won't close their money maker just yet.

4. Sell it to a third party

This route may include a little work, but it is still very rewarding. Companies such as NextWorth, Gazelle, and YouRenew will gladly buy your old iPhone from you. Before deciding which company you would like to work with, I advise you to read reviews for the current season to find the best company.

You may also want to try selling your iPhone on eBay. Phones are constantly in high demand on eBay and they literally sell out like crazy. Unless you have been living under the rocks, I'm sure you have heard of numerous crazy iPhone 6 sales -  the top story being for $6000![1] And guess what? It wasn't even an iPhone 6 Plus!

The moral of the story: everything sells on eBay for anything! However, be prepared to pay some eBay fees. Unless you are a seller who sells stuffs regularly and have a monthly membership, the fee can be quite high. The plus point, however, is that you can get real cash instead of a store credit or a new phone. Most popular means of getting the money is through PayPal. Once the money is cleared, it can be withdrawn to your bank account or your card; or you can even buy anything else from eBay itself!

We all have kids or teenagers who are constantly begging for phones. Why not pass along your iPhone to your son/daughter while you upgrade to the newest one? The 21st century generation, especially born in the late 90s and later, is morbidly addicted to WiFi and the internet. They can't live without the internet for even an hour.

By passing your old phone to your younger ones, you can actually save a lot of time that would otherwise be wasted when your kids go on nagging about new and equally expensive smartphones. This way, you can also keep them in debt and cash it in later when they start demanding a lot of unnecessary gadgets.

Save some money in the long-run and keep your kids happy at the same time!

But first, clean it up!

No matter what you decide to do with your iPhone, be sure it is stripped on any personal information or data that may be on it. You never know who may end up with your iPhone next, so it's best not to take any chances. 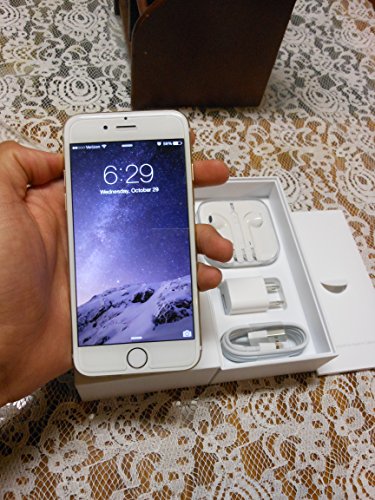 Apple Iphone 6 4.7 Inch 16GB Unlocked (T-Mobile) Silver Amazon Price: $949.99 $769.99 Buy Now(price as of Nov 6, 2014)
The new iPhone 6 and 6 Plus users have said that this is easily the best smartphone they have ever used. Even Android lovers have switched from Samsung's Galaxy S5 to the latest iPhone 6. Much has to do with Apple releasing the new iOS 8 - which has reduced a lot of clutters like Apple maps, advancements in Siri and of course, the much talked about fingerprint reader. The main buzz around it was its tendency to bend. So what do you do? Simple - don't put it in your back pocket. Not just iPhone, any phone will bend or break if applied too much pressure.

Take awesome photos with new improved camera in the iPhone 6

Enjoy selfies and do much more with the new iPhone 6!