We can all benefit by sharing our personal experiences and insights and Info Barrel is a wonderful place to do this. We are in no position to judge anybody. But all of us can learn from the stories people tell. They are unique subjective experiences, filled with personal emotions and feelings. We do not know how we would feel and behave in their shoes. Take a walk in mine!
InfoBarrel is a writing platform for non-fiction, reference-based, informative content. Opinions expressed by InfoBarrel writers are their own.
InfoBarrel > Health > Diseases & Conditions

What happens when we use too much fluoride and how can it kill us?

There is no known fluoride deficiency - but there are plenty of supplements. Why?

Dentists tell us to take fluoride supplements and use a fluoride toothpaste and mouthwash. So we all believe them without questioning the consequences. Scientific studies now prove that our fluoride fixation has actually done a lot more harm than good to our bones, our health and our teeth. There never has been a single reported case of a fluoride deficiency in a human being. (So much for the urgent need for fluoride supplements.) An excessive daily intake of more than 3 mg of fluoride from natural food sources, water or supplements can result in fluorosis of our teeth and bones. As a result tooth enamel is uneven, mottled and patchy. Teeth as well as bones become more brittle regardless of the origin of the fluoride.

This is a chunk of fluorspar or calcium fluoride - a natural fluoride that can be as harmful as what they call a waste product from the fertilizer industry.

Death by Fluoride and other unpleasant side effects

A doctor once told me about a four-year old girl who died after eating half a jar of fluoride tablets. The container did not have a special childproof cap on it. That was back in 1997 when the fluoride scam was running rampant and some people thought it was highly beneficial if swallowed. This was the case with a dangerous product called Ossiplex Retard. Just imagine - little sugar-coated tablets containing 25 mg of sodium fluoride! They were foisted on unsuspecting old ladies who suffered from weak and crumbling bones. Fluoride can attract more calcium to bone tissue due to its extreme electro-negativity. But at the same time it destroys the collagen tissue that adds strength and flexibility to bones. So they become brittle and can snap easily – especially after a fall.

One night we found our elderly neighbour wandering around the streets by herself in the dark. She said that her oesophagus hurt her so much after taking these fluoride pills she could not lie down. I was asked to investigate and ended up getting into trouble with our Medical and Dental association. All because I want and did some homework at the library. (We did not have any internet facilities at home in 1995) I wrote a well referenced paper at their request indicating that fluoride is toxic and dangerous. After their board meeting they concluded that I was being emotional and not at all scientific. But the doctor who prescribed a daily dose of 25 mg of sodium fluoride to the old lady was unrepentant.

Here is some comforting information from the package insert of Ossiplex Retard. AS I said the pills are sugar-coated and may look and taste like a sweetie to a small child.

OSSIPLEX RETARD: SYMPTOMS OF OVER DOSAGE AND PARTICULARS

Sodium fluoride is corrosive; when taken by mouth in quantities in excess of about 250 mg it causes salivation, nausea and vomiting, epigastric pain and diarrhoea. Large doses cause thirst, perspiration, paralysis, muscular weakness and convulsions, followed by respiratory and cardiac failure; there may be renal failure; death may occur within 2-4 hours.

Even a small amount of fluoride can inhibit our thyroid function

Credit: Sue Visserhyperthyroidism says it all. It was a popular treatment way back in 1960. But in 1985 the Bachinskii studies showed us hat consuming more than  3 mg per day from either naturally occurring  sources of calcium fluoride or from artificially fluoridated water could have a dampening effect on normal as well as overactive thyroid glands. This can lead to even more serious complications when the water is chlorinated because both chlorine and fluoride compete for the iodine receptors on the thyroid gland and kick out the iodine. Bromide that is present in modern bread also competes for the same receptor. So unless iodine supplements are given to compensate for our exposure to fluoride, chlorine and bromide we will have people constantly affected by goitre, weight gain, depression, sluggishness and so on. We need to make sure that we get enough iodine and magnesium to ward off the effects of an overdose of fluoride.

Conspiracy theories about fluoride - where is the evidence?

Even when I was interviewed about the dangers of fluoride on our National Radio they thought I was crazy to speak out against fluoride. The National Osteoporosis Foundation stated in their quarterly magazine that I was confusing people. I suppose because I insisted that calcium supplements should be taken with magnesium. (They were being sponsored by a company that was selling calcium carbonate tablets as a cure for osteoporosis, you see.) But later they found that calcium carbonate (including TUMS) caused kidney stones and calcification of soft tissue. Science at least, had caught up with them. A few years later the same outfit offered to endorse a calcium and magnesium supplement that I had formulated because such products were not freely available at the time. But they wanted me to pay for the use of their logo. I think not!

Anybody who said that fluoride had an adverse effect on human intelligence was called a conspiracy theorist. But now, thanks to some extensive modern fluoride studies it turns out that the fluoridation campaigns unveil a sinister twist. Fluoride has not helped to lessen the rate of tooth decay without some adverse effects. Over 70% of the school children now have fluorosis of the teeth and this ironically has increased their risk of tooth decay. Teeth that have been "overexposed" to fluoride are mottled and unsightly. The enamel is unevenly formed and weak patches decay easily. Some of the teeth even break off. (I wonder if this is worse for the innocent people who drink their regular 8 glasses of water a day? ) The excessive intake of fluoride has also reduced the average IQ of the children who were studied. In harsher animal studies it was concluded that the fluoride exposure from common sources had neuro-toxic effects and could damage the brain severely. The increase in the rate of obesity may be due to a slower metabolic rate as a result of damage that is done to the thyroid activity of these children - and their parents.

Going upstream against mainstream medicine is not easy

Even 17 years later, after all the evidence against fluoride our "scientifically endorsed" mainstream Dentists still try to promote fluoride treatments whenever they find the opportunity. Some patients have approached me about the intense pain they get after the experience. This is probably because of the effect it has on their gums. Scientists say there is no antidote to fluoride. But we have found that if your gums hurt after a treatment, you can rub a paste made of calcium and magnesium onto the inflamed areas. Patients say it stops the pain within minutes, regardless of how long they have suffered as a result of a fluoride treatment. I began experimenting with a fluoride free toothpaste mixture based on calcium and magnesium carbonate that we still use today. People should be given choices so we went for the gap and made alternatives to mainstream toxic toothpaste and mouthwashes. But it was not really popular and Dentists were very suspicious of it.

Credit: Sue VisserRegular fluoride toothpaste for kids carries the warning that it should not be swallowed. (They call this sort of thing scientific.) There is enough fluoride in a tube of toothpaste to kill a small child. Parents have to supervise the children using it and make sure they spit out everything. Then the tube has to be put away out of reach. After I saw a toddler carrying a tube of adult fluoride toothpaste around and licking it, I decided to take some action. I developed some fluoride-free toothpaste for young children - but it didn’t sell. So I added the Homeopathic tissue salt called CALC FUOUR D6. This supplement also helps collagen formation to make teeth and bones stronger and it promotes healthy, firm gums. Ah – fluoride and we were back in business!

Saliva they say is the best mouthwash in the world. A dry mouth is caused by products that contain fluoride and alcohol – popular ingredients in some mouthwashes. Fluoride is thus what one could call a menace in the mouth because it also nullifies essential antioxidants and especially the oil-based vitamins A, D, E and K that protect cells from free radical damage. They are also important for the formation of strong and hard, healthy acid-resistant teeth. Fluoride is the most electronegative of all the elements and so it causes extensive damage to mouth, gum and throat tissues. As a result, cells die instantly and we all know what corpse breath or morning mouth smells like! The stench of what were once healthy cells that were executed overnight by Captain Fluoride. So read your labels!

So we hop out of bed and have a swish of that well-advertised fluoride mouthwash that Leading Dentists recommend the most. Gargling with a fluoride-enriched mouthwash can also harm the thyroid gland. Fluoride (natural or otherwise) is also absorbed in the mouth membranes and directly enters the bloodstream. Fluoride displaces the iodine we need for the production of thyroid hormones. A common symptom of a thyroid problem is a dry mouth. Due to the lack of saliva the teeth are not constantly bathed in saliva – the miraculous tooth doctor. The mucous in healthy saliva traps bacteria like Mutans Streptococcus that is primarily responsible for tooth decay and deactivates it. Then we swallow the saliva to get rid of anything left lying around that may attack tooth enamel.

So what should we do?

Top up on extra magnesium and iodine if you are worried about fluoride exposure.

Read this book and take action

Ignorance is what makes us lose good teeth 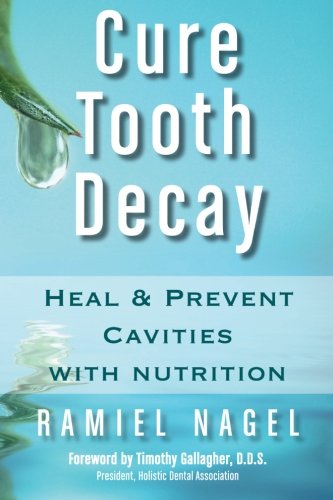