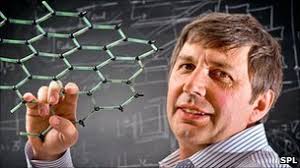 Graphene has its origins in the Manchester University laboratory of the Nobel Laureate Professor Andre Geim. It is a honeycomb structured 2D material made from sp2 bonded carbon atoms;  only one atom deep the arrangement permits electrons to traverse through the material  whilst providing a surprising degree of strength. Two hundred times as strong as steel the substance is reputedly able to resist a force equivalent to that produced by an elephant sat on top of a sharpened pencil. In other words it is a one atom deep cling-film guaranteed to keep your sandwiches safe from even most penetrating poison dart.

The material has its beginnings in  experiments into carbon transistors and was rather poetically discovered when a member of the research team applied a piece of scotch tape to a graphite pencil. Inauspicious as this technique may have been the discovery paved the way to the remarkable unearthing of a new miracle material.
Potential uses for graphene include:
Transistors - Inkjet printing of graphene is enabling researchers to design transistors that are faster and more efficient than the standard silicon variety.
Gas Sensors - Slight changes in the electrical conductivity of graphene caused by contact with other molecules makes graphene an ideal sensor with incredibly precise detecting capabilities.
Support systems for Electron Microscopy - Graphene is so thin that it is effectively the world's best material for use in an electron microscope.  It's one atom depth means it can be easily differentiated from the diffraction patterns produced.
Coatings - Graphene's physical properties make it a potential one atom deep Teflon for the 21st century.
Sensors for the diagnosis of disease - researchers anticipate using graphene along with DNA and fluorescent molecules to diagnose disease.
Other possibilities based on the material's properties include its use in the production of ultra-light aircraft and cars, touch screens, as a replacement for glass and use in microsurgery. It also has anti-bacterial qualities and a degree of lightness and flexibility that suggest it could become a replacement for plastic in the food packaging market.
But what are the stand-out qualities that make this material a real scientific curiosity...
Strength - Graphene is so strong that a person can literally pick up a whole sheet of it without it breaking, effectively meaning that they can hold in their hands an entire foldable, flexible  film of carbon atoms.
No Band Gap - Graphene absorbs electrons at all frequencies, making the substance ideal for highly efficient photovoltaic solar cells.
Near Ballistic Conduction - Similar to superconductivity at room temperatures, electrons can navigate a material without resistance.
It also has the highest current density (a million times that of copper), the highest intrinsic motility (100 times that of silicon) and can carry electricity more efficiently, faster and with more precision than any other material.
Stretch and stiffness - Graphene is stiffer than diamond but can be stretched by up to 20 percent of its length
Thermal conductivity and permeability -  Graphene is the substance with the highest level of thermal conductivity known to man and is also the most impermeable material on the planet. It is so impermeable that even single atoms of helium cannot pass through it; a quality that makes it ideal for the production of gas detectors.

In 2008 graphene was considered to be one of the most expensive materials on Earth, coming in at about $100,000/cm². As production techniques have developed so too has the price reduced, resulting in the potential for the material's use in industry. Graphene investments are now considered to be one of the stocks to watch closely over the next decade. At the present time investment opportunities are small as the main companies involved in the development of graphene are yet to have floated on the stock exchanges of the world.
Next >> Zika: The Warnings About Wolbachia and Culex Our Health Authorities are Ignoring