I am a retired teacher of English as a second language. I teach on line via Skype, and write on-line articles which reflect my love of travel, language, literature, history and culture. I love writing for InfoBarrel. Why not join me by signing up here: http://www.infobarrel.com/signup.php
InfoBarrel is a writing platform for non-fiction, reference-based, informative content. Opinions expressed by InfoBarrel writers are their own.
InfoBarrel > Sports

What on Earth is Pickleball?

The first time I heard about pickleball, I found myself giggling at the name and thinking that it could not really be a serious sport. This mixture of curiosity, amusement and disbelief is also typical of the reaction I get when I tell people the name of the sport I play.

People are always intrigued and generally ask two questions: "What is pickleball? and "How did it get its name?"

This first question is easy to answer. Pickleball is a racket sport which is a cross between badminton, tennis and ping-pong. It is also a relatively new sport which is rapidly gaining in popularity among various age groups but especially among seniors.

How did Pickleball Get its Name?

It is not quite so easy to answer the second question.

To begin with, it has absolutely nothing to do with vinegar-soaked vegetables.

The generally accepted version of the story takes place in Bainbridge Island, near Seattle, Washington in the summer of 1965 at the home of politician Joel Pritchard. The Pritchard children were bored, so their father created a new game to keep them entertained. He made some wooden paddles, lowered the net on the badminton court, and found a wiffle ball (a hollow plastic ball with  holes in) to hit back and forth.

You will generally hear in pickleball circles that the game was named after the family dog Pickles, a cocker spaniel who kept running off with the ball.

However, in an interview for a Bainbridge Island newspaper Pritchard's children stated that the family did not actually get their dog until after they began playing the game, and that he was actually named after the game not the other way around. Pritchard's son Frank believes the name of the game had something to do with his mother's love of competitive rowing and the use of the term "pickle boat" for the last boat to finish a race.

But Pickles the ball-chasing dog seems to have more crowd appeal than a tale about a slow boat.  This story is told everywhere the game is played, and has achieved the status of an urban legend. 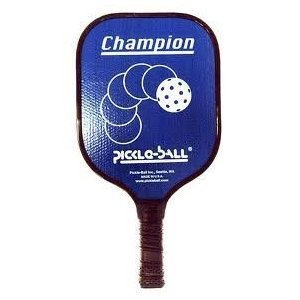 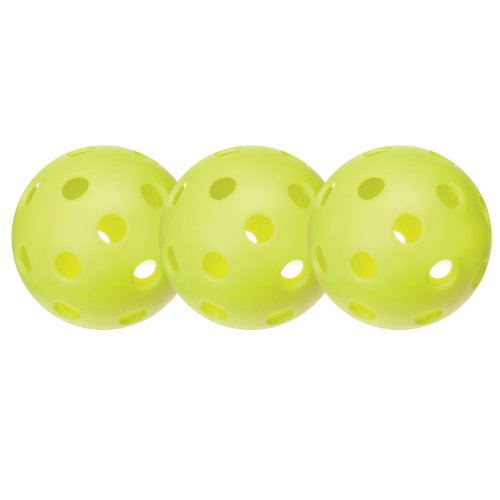 Mr. Pritchard's original paddles were made of wood. While some people still play with wooden paddles, and some people even make their own, there is now a variety of commercial paddles made of much lighter and more resilient materials.

The balls are hollow, "wiffle" type plastic balls. Pickleball can be played either indoors or outdoors, and the design of the outdoor ball makes it more wind resistant than its indoor companion. The indoor ball is soft and bouncy, with fairly large holes, while the outdoor ball  is made of firmer, heavier material and has smaller holes.

There is no regulation clothing. The official rule book states that clothes should be in good taste and should not distract other players, but does not elaborate on this statement. This is unfortunate because one person's idea of good taste can be another person's fashion disaster, especially where Spandex is concerned.

The recommended footwear is a pair of comfortable court shoes with soles that will not mark the playing surface. In order to protect the surface of their courts some centers ask players not to wear shoes with black soles.

Indoor pickleball is played on a wooden gym floor, often on an adapted badminton court. The outdoor game is played on a cement court which may be especially created or painted onto an existing tennis court.

The court is smaller than a tennis court. It measures 20 by 44 feet (22 feet from the net to the back of the court) and is divided the into left and right service areas by a center line. The net measures 36 inches in height at the sides and 34 inches in height at the center. A unique feature of pickleball is a non-volley zone, nicknamed "the kitchen", which extends seven feet on each side of the net.

Credit: Submitted by creator, owner of http://www.thepickleballstore.com to help promote the sport of pickleball. Public domain via Wikimedia Commons.

Pickleball is generally played as a doubles game, although it can also be played as singles.

To serve, the paddle must contact the ball below the server's waist. It should be hit upward and travel diagonally from the right-hand corner of the court to the opposite left-hand quadrant. If the serving team scores a point, the server moves over to the left-hand side of the court for the next serve. If the receiving team score a point they gain the serve and the opportunity to make points.

Credit: By Thelyonhart (took it on my phone) [GFDL (http://www.gnu.org/copyleft/fdl.html) or CC BY-SA 3.0 (http://creativecommons.org/licenses/by-sa/3.0)], via Wikimedia Commons

There are two basic shots in pickleball, the volley and the ground stroke or bounce shot.

The receiving team must let the served ball bounce before hitting it back. It should then bounce again before the serving team returns it. This is known as the "two bounce rule." Once the ball has bounced twice, players can either let it bounce before hitting it (ground stroke)  or hit it before it bounces (volley). However, players are not allowed to volley from inside the kitchen or to step into it the kitchen area as they volley.

Players earn points when their opponents commit a fault. Some faults are similar to tennis faults while others are unique to pickleball. The main faults are:

For the opening serve, only one partner serves before the serve transfers to the other team. The server calls 0-0-start or 0-0-2. If this team scores a point, the score becomes 1-0-start. If the other team scores they will call 0-0-1 on the next serve.

Pickleball is a sport for all ages and abilities which involves both physical skill and tactics.

This Video Shows People of all Ages Enjoying Pickleball

Depending on the skill level of the players, it can be either a fun game or an extremely fast and competitive one. Generally lasting between 15 and 20 minutes, pickleball games provide a short but fairly intense workout. I am in my sixties and have been playing twice a week for about three years. It is a rapidly growing sport among active seniors who want to keep fit, meet new people, and have fun. It is also popular with young people and is increasingly making an appearance in school P.E. classes in the United States.