I am a retired teacher of English as a second language. I teach on line via Skype, and write on-line articles which reflect my love of travel, language, literature, history and culture. I love writing for InfoBarrel. Why not join me by signing up here: http://www.infobarrel.com/signup.php
InfoBarrel is a writing platform for non-fiction, reference-based, informative content. Opinions expressed by InfoBarrel writers are their own.
InfoBarrel > Lifestyle > Food & Drink

What is Rooibos Tea and Does It Have Health Benefits?

But my personal favorite is the less well-known red tea, also known as African red bush tea or rooibos.  The name "red tea" is actually misleading because rooibos does not come from Camellia sinensis iit is considered a herbal infusion rather than a true tea. Rooibos comes from the legume Aspalathus linearis, a small bush which is a member of the broom family. However, unlike most herbal teas, it can be enjoyed like black tea with milk and sweetener or a slice of lemon.

Also unlike Camellia sinensis, which is cultivated around the world, rooibos is a hardy desert plant which grows only in the Cederberg wilderness area of the Western Cape province of South Africa. Attempts to cultivate it elsewhere have failed. Traditionally used as a drink and a herbal remedy by the local Khoisan people, it was also drunk by the early Dutch settlers in South Africa as an alternative to expensive imported black tea.

Rooibos was developed as an agricultural crop in the 1930s by Dr. Le Fras Nortier, who had to solve an interesting problem in order to do so. Each redbush pod contains a single tiny seed.  When the pod ripens, it bursts and ejects the seed onto the sandy desert soil where it is virtually invisible. It was therefore extremely difficult to harvest wild seeds.

Dr. Nortier offered local villagers a shilling for a matchbox full of seeds. Most of them had difficulty filling even one box. However, one woman had a secret which enabled her to make a tidy profit by selling Dr. Nortier several matchboxes of seeds every day.  Knowing that black ants collected rooibos seeds, she followed them back to their colony, opened their nest, and raided their store.

To this day some farmers still obtain seeds from ant colonies in this way.

On a rooibos farm it takes about 18 months for a seed to grow into a plant which is ready for the first harvest. The plants are cut down and then left to regrow.  Each bush can be harvested from three to five times.  The harvested shoots are bound into sheaves, bruised, allowed to oxidize until they turn a deep amber color, and sun dried.  Once the leaves have been sorted, graded and steam pasteurized they are ready for shipment around the world.

A Short Video About Rooibos Farming

There are many magical-sounding cure-all health claims about rooibos which to a skeptic like myself sound too good to be true.

A quick search of the internet will reveal that drinking rooibos is said to be a solution for a wide range of complaints, including headaches, asthma, hay fever, insomnia, acid reflux, nervous tension, digestive irritation, and the pain of prostatitis and cystitis. It is also recommended as being anti-inflammatory and anti-allergenic, and beneficial for the relief of colic and allergies in babies. In addition, washing with rooibos is supposed to reduce wrinkles, and alleviate eczema, acne, sunburn, diaper rash, psoriasis and dermatitis, while rooibos shampoo is recommended as a cure for dry, itchy scalp.

I simply drink it because I like it. However, it does appear that there may actually be several health benefits to drinking rooibos in preference to black or green tea.

First, some potentially problematic substances in traditional tea are absent in rooibos.

Rooibos is naturally caffeine-free. This makes it a good bedtime drink for insomnia sufferers or anyone like myself who is sensitive to caffeine. It is also a safe choice for pregnant women and nursing mothers.

Tannin is a bitter substance which gives over-steeped black tea an acrid "stewed" taste.  It can stain your teeth and is known to inhibit the body's absorption of minerals like iron. Rooibos contains less than half the tannin of black tea. Therefore when it is be steeped to full strength it develops a rich flavor without becoming dark or bitter, will not stain your teeth, and will not interfere with mineral absorption.

Black tea also contains high levels of oxalic acid, which has been linked to kidney stones, gout and rheumatoid arthritis. However, while black tea contains 100 micromoles per liter, rooibos contains a mere 5.5 umol per liter so is a safer choice for anyone with these specific health concerns.

Not only is rooibos lacking potentially harmful substances, but it also contains many beneficial ones. It is rich in minerals, including calcium, fluoride, magnesium, copper, zinc and potassium.  While black and green teas are recognized as good sources of antioxidants, which help to protect cells from cancer, rooibos contains more antioxidants than black tea, and is also a source of flavonoids which are believed to prevent both cancer and cardiovascular disease.

Order Online If Your Local Supermarket Does Not Have Rooibos 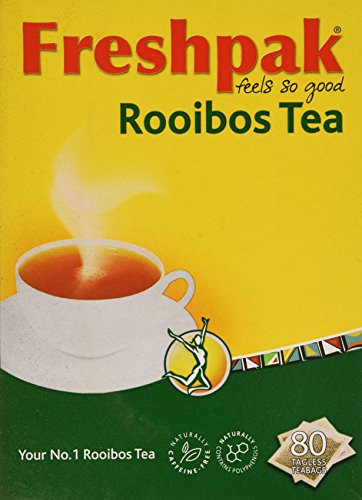 Rooibos is a traditional South African folk remedy for infantile colic, allergies, asthma and skin problems. It is sometimes used as an ingredient in skincare products, and may also be used to bathe dry skin. In fact, South African hospitals routinely use rooibos baths to soothe the skin of children with skin allergies.

But the question as to whether red bush tea can actually cure disease is an open one and it has been the subject of a great deal of scientific research.

The South African Rooibos Council was established in 2005 to promote the South African Rooibos industry. The Council points out that a review by the Journal of Ethnopharmacology of over 50 years of research indicates that red bush tea may be effective in combating cancer, heart disease, strokes, Alzheimer’s disease and diabetes.

While SARC obviously has a vested interest in spreading the word about positive scientific findings, the wider scientific community has not reached a consensus. A partial selection of published findings includes results of animal studies which indicate that rooibos may repair liver damage, delay aging, fight allergies, restore immune function, protect red blood cells and act as a bronchodilator. There are fewer clinical trials involving people, and many claimed benefits found by some researchers are disputed by others. Some studies find no positive detoxification effects or anti-allergenic properties. Others demonstrate its effectiveness against inflammatory skin diseases and sensitivity to ultra-violet radiation, and strong antioxidant action.

The scientific community continues to debate the benefits of rooibos as research continues. In the meantime, those of us who simply like drinking it will continue to enjoy the summer hayfield scent and flavor or this delicious African tea.