InfoBarrel is a writing platform for non-fiction, reference-based, informative content. Opinions expressed by InfoBarrel writers are their own.
InfoBarrel > Lifestyle > Beauty

What is a fish pedicure?

Give Your Feet a Treat.

Sounds strange but the latest treatment in the world of beauty treatments is the fish pedicure. Also known as an organic pedicure the treatment originated in Turkey and has been practiced throughout the Far East for centuries. It involves immersion of the feet in a tank of Garra Rufa fish, a unique breed of fish that slowly nibble at the dry skin on the soles of the feet. It can feel slightly tickly at first but soon becomes very soothing and can be a fun way to spend an indulgent and relaxing time with friends. Mum and daughter spa sessions are also popular and give you the time to bond in a stress free environment; there's nothing quite like a Garra Rufa fish chewing on your toe to ignite conversation.

A fish pedicure is not all about beauty however. Sure it's a great way to exfoliate the feet, and it does leave you feeling calmer, but the health benefits go further than that. The Dr Fish is also thought to stimulate acupuncture points of the body, providing a release of energy through the spleen, liver, stomach, gall bladder, and neck meridians, to name but a few. Furthermore, the fish actually releases an enzyme containing dithranol in its saliva that helps to heal the skin, stimulates the growth of new cells and decreases the likelyhood of blemishes . Spa owners claim people with eczema and psoriasis have found the treatment to be particularly useful in remediating the irritation caused by their condition. The water in the tanks is filtered up to 8 times an hour and the tanks are usually for individual use only.

The treatment is entirely natural and was discovered by happenstance when the local people of a small Turkish village noticed the hard skin on their bodies had been removed whilst swimming in the nearby river. The species of fish responsible are now legally protected from commercial exploitation in Turkey in response to the possibility that overharvesting may occur to support the global beauty treatment trade. 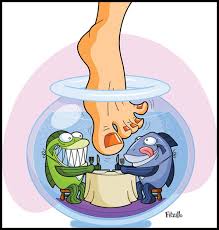 The   British Health Agency has issued a warning to people considering a fish pedicure that they may be at risk of contracting infections such as HIV and Hepatitis C. The HPA has found that despite the filtration process a number of microorganisms have been found in the tank waters. Infections could be transmitted from fish to person during nibbling or from water to person due to the bacteria in the tank. The HPA did concede that if the proper procedures are followed then the level of risk is marginal, yet it maintains the risk of infection cannot be eliminated entirely. It is also suggested that individuals suffering from skin conditions such as psoriasis should avoid the treatment due to increased risk.

The treatment is banned in several US states, including Florida, Texas and Washington.