What is the Doomsday Clock?

On January 22, 2015 the Bulletin of the Atomic Scientists announced that they had turned the hands of the Doomsday Clock to three minutes to midnight.

So, you might ask, what is the Bulletin of the Atomic Scientists, what is the Doomsday Clock, and why is this news?

The Bulletin is an award-winning journal which has been published every two months since 1947. It evolved from a newsletter published by scientists at the University of Chicago who were involved in the development of nuclear weapons.

Credit: By Federal Government of the United States [Public domain], via Wikimedia Commons

Although published by scientists, the Bulletin's purpose is political rather than scientific. It is concerned with the dangers of science and the human potential for self destruction. Originally focussed on the threat of the nuclear arms race, it now also comments on climate change, biotechnology and new fields of research such as cyber technology.

The Doomsday Clock, which is shown at the head of this article, originally appeared on the front page of the first issue of the Bulletin in June, 1947. This simple but powerful graphic showed the upper left quadrant of a clock face with the small hand at midnight and the large hand at seven minutes to midnight, with midnight representing the point of no return, the day of doom when the human race would finally succeed in committing suicide.

Two years previously, the United States had dropped atomic bombs on Hiroshima and Nagasaki, and now the U.S. and the U.S.S.R. were embarking upon a nuclear arms race. The driving force behind the arms race was to become Mutually Assured Destruction. MAD locked the two superpowers into a deadly chess game in which each believed that if they had enough nuclear weapons to blow the other into oblivion, neither side would be willing, or insane enough, to drop the first bomb. 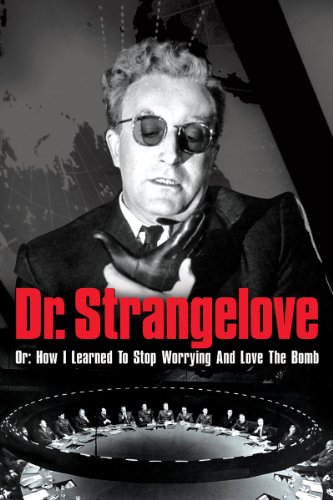 The clock was thus a direct visual representation of how close the world was to global nuclear war. Since June, 1947 the Doomsday Clock has been shown on the cover of every issue of the Bulletin, with the minute hand at various positions on the clock face, and moving away from and towards midnight in response to global events.

As the arms race heated up, the hand was moved gradually closer to midnight.  The closest it has ever been was in 1953 when the superpowers began developing the hydrogen bomb. At this time the Bulletin  predicted that "Only a few more swings of the pendulum, and, from Moscow to Chicago, atomic explosions will strike midnight for Western civilization."

However by 1960 the minute hand stood at seven minutes to midnight and the world seemed to be breathing a little more easily as the U.S. and the U.S.S.R. attempted to avoid direct confrontation and moved towards diplomacy and scientific cooperation.

In spite of the fact that in 1962 the Cuban Missile Crisis briefly seemed to bring the world to within 30 seconds of global thermonuclear war, the minute hand continued to move back. It stood at twelve minutes to midnight in 1963 after the U.S. and U.S.S.R. signed the Partial Test Ban Treaty, but returned to seven minutes to midnight in 1968 during the Vietnam War when France and China became nuclear powers. The furthest that the minute hand has ever been from midnight was 17 minutes in 1991 at the end of the Cold War. That year the Bulletin stated that "the illusion that tens of thousands of nuclear weapons are a guarantor of national security has been stripped away."

Since 1991, the minute hand has been gradually creeping back towards midnight. India and Pakistan entered the nuclear club in 1998, followed by Communist North Korea in 2007.

In 2010 the clock was reset at 6 minutes to midnight.  The Bulletin expressed optimism about progress on planned reductions in the U.S. and Russian nuclear arsenals, and international cooperation on global warming. However, it also expressed concern about the easy availability of nuclear technology, the possibility of terrorist attacks on nuclear facilities, and new biological threats arising from advances in genetics and bioengineering.

In January, 2015, in the first adjustment to the clock in three years, the Bulletin moved the minute hand to three minutes to midnight, the closest it has been since 1983. Their justifications for this decision included insufficient efforts to prevent global warming, the slowing of nuclear arms reduction by the U.S. and the U.S.S.R., and the failure of international leaders to protect the people of the world from catastrophe.

In the latest press release announcing the clock's readjustment, Atomic Scientist board members pointed out that in spite of the fact that the atmospheric level of global greenhouse gases in 2015 was 50% higher than in 1990, corporations and governments were investing in fossil fuel development at an unprecedented rate. They recommended that world leaders act to cap greenhouse emissions, refocus on nuclear disarmament and address the issue of nuclear waste. They also encourage citizens to pressure their leaders to take action on these vital issues.

Because the Doomsday Clock is the creation of scientists, it is tempting to wonder what scientific logic, formula or algorithm they use to determine the position of the minute hand. But apparently there is none. According to their recent press release, "The decision to move the minute hand is made by the Bulletin's Board of Directors in consultation with its Board of Sponsors." In other words, the decision is made through a process of political debate in which the board simply hashes out the issues until they reach a decision.

The time changes on the clock are symbolic political statements. The Doomsday Clock originated to jolt the conscience of the world by making the nuclear threat a visible and concrete reality. The Atomic Scientists maintained and perhaps even increased its relevance by adding terrorism and biotechnology into their considerations.

Thanks to the instantaneous communication of the internet there is no hiding that fact that the world is a dangerous place. Nuclear disasters like Three Mile Island, Chernobyl and most recently Fukushima, Japan in 2011 demonstrate that even the peaceful use of nuclear energy poses a potential risk.  In addition, the rise of terrorism and the unpredictability of groups like ISIS makes nuclear proliferation a serious concern.

In January, 2017, with Donald Trump as the new U.S. President, the Clock was moved 30 seconds closer to midnight based on his campaign rhetoric. The clock is traditionally only reset at the beginning of the year. However, in a July, 2017 update, the Bulletin pointed out that in the first six months of office Trump had withdrawn from the Paris Climate Agreement, undermined NATO, increased the risk of natural pandemics, biological warfare and the impact of climate change by cutting both health care funding and scientific research, and increased the risk of nuclear warfare by making reckless threats against North Korea. The article concluded by calling on both Democrats and Republicans to lay aside partisan politics to limit Trump's ability to threaten the world.

Cassandra was  a Trojan princess with the gift of prophesy who was cursed by the god Apollo because she spurned his advances.  Although she could accurately foresee the future, Apollo's curse guaranteed that those who heard her prophesies would never believe them. Consequently, when she predicted the conquest of Troy by Greeks hiding in a wooden horse she was locked away because the king thought she was insane.

What do you think?