I love writing for InfoBarrel and write on a variety of topics. You can see my recent articles here.Â http://www.infobarrel.com/Users/andrewagreen If you would like to make extra money writing sign up for InfoBarrel hereÂ  Â
InfoBarrel is a writing platform for non-fiction, reference-based, informative content. Opinions expressed by InfoBarrel writers are their own.
InfoBarrel > Travel & Places

What to do in Windsor

A Day Out in Royal Windsor.

Credit: Andrew Green, 2011The Royal borough of Windsor is best known for its close association with the Queen and the royal family. An hours journey out of London; it is Queen Elizabeth's favourite week-end getaway. In fact Windsor is so popular with the royals that they took the name Windsor as their family name when the name Saxe-Coburg was deemed too Germanic during the second world war.

Arriving in Windsor by train

My favourite way to arrive in Windsor is off the train from London Waterloo. The train skirts around Home Park giving great views of Windsor Castle as you pull into Windsor & Eton Riverside one of Windsor's two stations. The first thing you must do on seeing the castle is to check the flag pole. If the Union Jack is flying the Queen is still in London or off on her travels somewhere. If you see the royal standard fluttering you know Queen Elizabeth is at home. It is unlikely you will get to meet her but she's there.

Emerging from the station you are in the shadow of Windsor Castle, huge and imposing above you. The royal home is the largest inhabited castle in the world and the longest in continuous occupation at over 900 years. Cross the road and follow the contours of the castle wall making your way up High Street.  On the right of the road are the usual shops and restaurants you will find in any small town; on the left is Windsor Castle solid and up close. Windsor sits near to its castle  and quite literally clusters around it. Town and castle are close in a way I have not experienced anywhere else.

At the top of the hill is Queen Victoria's statue. Turn left here for the entrance to the Castle. To the right is Windsor's other station, the Central or Royal Station. There is a shuttle service from here to Slough where you can get a fast (20min) train to London Paddington but these days the Royal station is mostly given over to shops and restaurants. You can still see the original booking office however and close to the platform for Slough is the much photographed 'Queen' steam locomotive. In the booking office area you will find Windsor's Tourist Information Centre an invaluable source of advice for what is going on.

Arriving in Windsor by car or coach

If you are coming to Windsor by car your first sight of the castle, huge and unmistakable, will be from the M4. Leave the motorway at junction 6 and follow the signs into the town. Finding the car parks can be confusing for the new visitor but there is an excellent web site devoted to Windsor parking you will be well advised to consult. The car park to avoid is the one at the bottom of Thames Street. It is privately owned, over expensive and they are quick to clamp vehicles that stray over their allotted time. Wherever you park, the best way to orientate yourself is to find the royal station and Queen Victoria's statue and the main entrance to the castle.

Coaches park in the Alma Road car park adjacent to the river. The quick way into the town from here is via the metal staircase at the end of the coach park. That takes you straight up into the royal station.

You can enjoy a visit to Windsor without going in to the castle itself but if you have the time and don't often come this way I would recommend a visit. It takes between 2-3 hours to get around and costs £17 for an adult, £15.50 for students and over 60s, £10.20 under 17, under 5s free.

The state apartments are stuffed with fine works of art from the royal collection. There are works by Rembrandt, Rubens, Canaletto and Gainsborough and exquisite exemplars of craftsmanship at every turn.

St. George's Chapel, the royal chapel and home to the Knights of the Garter is among the finest examples of gothic architecture and worth a visit on its own. It's open for people who wish to attend services which can be an excellent way to experience the chapel without taking the full tour.

Queen  Mary's dolls house took three years to make and was the work of 1500 craftsmen. It is probably the most famous dolls house in the world.

A little further along the High Street is the Windsor Guildhall; a magnificent building in its own right. The Guildhall is Windsor's Registry office and is where Prince Charles and Camilla Parker-Bowles were married. It has also been the location for high profile civil partnerships including Elton John's. The Guildhall dates back to 1687 and was overseen in the later days of its construction by Sir Christopher Wren.

Next door to the Guildhall is the extraordinary Crooked House Tea Room.

Credit: Andrew Green 2008Continue  past the Guildhall and make your way round to the George IV gate at the back of the castle.

You are entering Windsor Great Park and the Long Walk. The Long Walk is a long straight tree lined walk, a little under 3 miles long,  running south  from the George IV gate to the Copper Horse statue of the King George III. It is a long walk (hence the name) but commands excellent views back to the castle. The Great Park is a large deer park of 5000 acres. It is mainly open to the public now but was formerly a private hunting park for the benefit of the royal residents.

Sites and attractions in the park include Polo on Smith's lawn, the Royal and Cumberland Lodges, a statue of the Queen on horseback that marked her 50th jubilee, near to the village where many of the estate's workers live, Savill Gardens and Valley Gardens.

Back to the river

Returning from your walk, if you are not too exhausted, make your way back down the hill to the river and the bridge over to Eton. Eton is an interesting excursion in itself with the world famous public school, its playing fields and Eton Dorney lake where the olympic rowing events will be held but to see the castle from another angle make your either make your way over Eton bridge to the large grassed area on the other side of the river or take a trip on the river.

Whether picnicking on the Brocas, as the strip Eton side of the river is called, or gliding along the river on one of French Brothers cruises you will get a magnificent view of the castle. There are many views of the castle to be had around Windsor and each is more splendid than the last.

The boat trip itself can be disappointing as you spend to much time in the lock but you should get a sight of Windsor Racecourse a pleasant venue for horse racing on a summer evening, particularly if you arrive by boat. Visitors to the Olympic rowing will be directed to Windsor racecourse. A bridge is being constructed across the Thames to Eton Dorney on the other side. 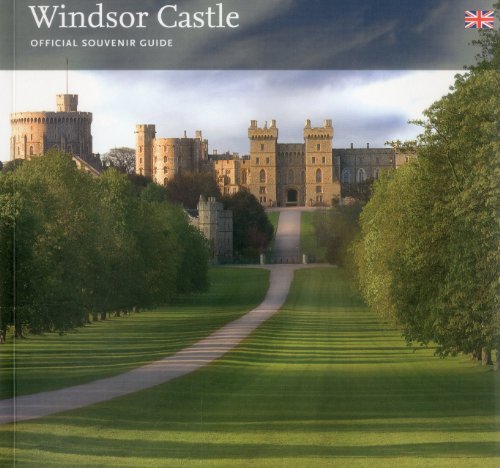 The Changing of the Guard

To catch a glimpse of royal pageantry time your visit to coincide with a changing of the guard ceremony. These occur every other day. Check the Royal Palaces web site for the details of when they occur in any particular month. To see the new guard march into the castle you need to be at the    top of Peascod Street, around the Queen Victoria statue at around 10.50am. The old guard leave at around 11.25. The ceremony itself takes place inside the castle but you will see the guard enter and leave with their marching band.

To get the full effect of Windsor at its ceremonial best try to come on a day when there is a State Visit. The flags will all be out and you will see the full panoply in all its splendour. You may even get a sight of the royals as they greet their guests.

In the summer months you can ride on the Windsor Wheel, a cut down version of the London Eye. In the winter the same venue, Alexandra Gardens, beside the river is a venue for ice skating on a temporary rink.

I have left Windsor's second biggest attraction and the big draw for the kids off my list but that is a whole day's visit in itself. Promise them a visit to Windsor's Lego themed Theme Park and they are sure to be on their best behaviour all day.

So there are a lot of things to do in Windsor. Too many to fit into one visit.  Visit once and I am sure you will want to come again.