By The Wolfe Writes

When Aliens Attack: Review of The 5Th Wave

If aliens are going to attack Earth, I would want them to be quick and to the point. Humanity would gather together and fight the planet invaders. There would be no dividing differences of religion, race or country; just human against attacking alien. We would defend our turf and brothers and sisters in arms. Well, that is how it usually happens in the movies. In Rick Yancey's bestselling YA Sci-Fi novel, the aliens do not follow the rules.Close Encounters of the Worst KindIn the 5th Wave the alien mother ship arrives and sits in the sky hovering for ten days. All attempts to make contact go unanswered. The Earth is in frenzy, wondering if the extraterritorial visitors have come in peace. Well, on the tenth day the collective question is answered: negative.The first wave: a massive EMP (that's electromagnetic pulse) that wipes out anything electrical on the entire planet in a matter of seconds.The second wave: the aliens drop a gigantic metal rod from the Earth's upper atmosphere onto a fault line, impacting the surface with a force a billion times greater than the nuke that took out Hiroshima. Tsunamis wipe out the plant's coastline, killing about 40% of the world's population in a day.The third wave: bio warfare. An Ebola like pestilence is released on our planet via birds. It is dubbed the red plague because near death the victim bleeds out of every orifice. The result: ninety seven percent of the remaining population succumbs to the disease in a span of twelve weeks.The fourth wave: the finishers. For those pesky humans who survive the first three waves, the aliens aren't done yet. They start picking off the humans one at a time. The worst part is that they look like us...no one can be trusted.The fifth wave: no spoilers here, you have to read the book and find out for yourself!The Survivor, the Silencer, the Soldier, and the KidYancey tells his story in four points of views. The story begins with Cassie, a sixteen year old survivor on a mission to find her kid brother. Her little brother was taken by soldiers along with other children to a military base. Cassie is tough, resourceful, and snarky. She has all the self-conscious issues of a normal teenager, but she’s tough as nails.The story is next seen through the POV of the silencer, a name Cassie uses to describe the others (aliens) that are killing off the remainder of the human population. This POV gives insight to the invader's motives for the future of Earth; why they are here and how they became one of us.Next is the soldier, a young man who survived the red plague. He is recruited by the military and trained to fight the alien invaders posing as humans. He is fighting his own demons as well. He is unsure who to trust and is suspicious of the "new" army he has been drafted into.The last POV is told my Cassie's little brother. He is scared, curious, and never forgets the promise his sister made him...that she will come for him.

The 5th Wave is definitely an action packed ride of suspense, explosions, and surprises. One of the best quotes in the novel is by Cassie's father, when he asks her if she knows how to tell who the enemy is in wartime. His answer: “The guy who's shooting at you".Yancey keeps you guessing throughout the novel. You're not quite sure who the real enemy is until the end, well, sort of. This is my only complaint of the novel; it's the first in a series. Now I have to wait for part two to be written. Nonetheless, this book was a thrill ride! In a star rating system, 4.5 stars out of 5. I docked Yancey half a star because I have wait for part two.Now for my parental disclaimer; I recommend this book for 13 and older. Although there is no sex in the novel, there is violence and a lot of kids with potty mouths. Given the post-apocalyptic, alien infested world they live in, I can understand. Nonetheless, these kids pack some serious heat: PG-13. 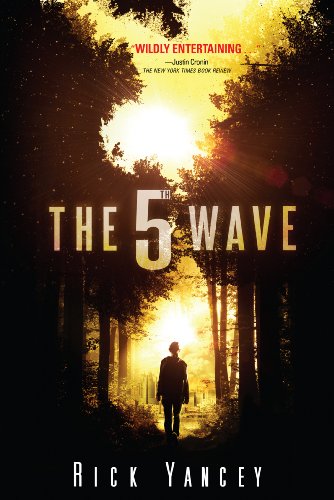