InfoBarrel is a writing platform for non-fiction, reference-based, informative content. Opinions expressed by InfoBarrel writers are their own.
InfoBarrel > Lifestyle > Fashion

Where Can I Find Missy Robertson's Clothing Line?

Missy Robertson is very busy woman. Along with her husband, Jase, she works at Duck Commander and they raise their three children, Reed, Cole, and Mia together.  She is an active volunteer with her church and sings in the choir as well.  She is also an active parent in her children’s school and of course, is also seen on A&E’s reality program Duck Dynasty.

She is also a woman who is in her early 40’s, a demographic that many in the fashion world fail to recognize.  Woman who are in their thirties, forties and fifties are no longer able to wear clothing cut for Juniors, as gravity, childbirth and weight shifting has moved around, particularly in the southern direction.

Not only is Junior sized clothing not cut for a woman’s figure, it also shows more skin that we would like. That kind of look is not flattering on women of older ages, unless she shares the same gene pool as Christy Brinkley or Halle Berry.

Yet, we also do not want to wear the Alfred Dunner stretch pant coordinates that seem to dominate the petite and misses departments, either.  The polyester pants and matching embroidered sweatshirts are not what makes a sultry date night look.

Credit: By State Farm [CC-BY-2.0 (http://creativecommons.org/licenses/by/2.0)], via Wikimedia CommonsThis is where Missy Robertson’s clothing line steps in. She fills in the void of women in this age bracket.  She wanted a trendy look much like what she saw in the Junior department, yet still look age appropriate.

Being in her early forties, she still feels young at heart and wants to look the part in a more modest way. Her clothing collection is a mix of bright colors, finished details, and they even show a hint of skin.  Hemlines are longer in the skirts, dresses and on the tops, as this look flatters the more mature woman.

The other key factor in her clothing is comfort.  No one feels right when they are wearing pants that are too tight or a shirt that does not lay right or rides up.  Fashion meets comfort with Missy Robertson’s clothes.

She collaborated with Stephanie Carter at Southern Fashion House. Stephanie is the creator of the successful Judith March line of clothing. As the designer, she brings Missy’s ideas to life. Although her goal was to fill a void she saw for mature women, Missy’s clothes have appealed to women of all ages.

Is it a success?

When it was first announced that Missy was going to debut a line of clothing, her fans were very excited.  The preview designs were well received.

However, that all changed when the items were available to purchase.

The biggest criticism is that they clothing is out of the price range for her fan base.  Blouses that cost over eighty dollars and dresses that are one hundred dollars are not in line with the budgets of those who watch her and the Robertson clan on Duck Dynasty.

Fans have commented that other celebrities, like the Kardashians, sell clothing at places like Sears for much less money. They expected her clothing to be available at an outlet like Walmart of Kmart, not the fancy boutiques where they are presently available.

Where Can I Buy Missy Robertson's Clothing Line?

If you are a person who can afford to buy her clothing, you will be able to locate a local boutique by going to the Shop Missy Robertson website.  There is a store locator and you can find a shop either by distance or by state.

You can also find her clothing for sale on eBay, as well as the specialty stores you will find on her clothing website.

You can look modest, classy and colorful when you wear clothing from the Missy Robertson line.

A Lesson on How Southern Women Dress 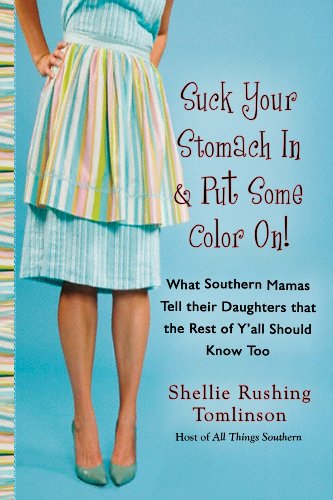 Suck Your Stomach In and Put Some Color On!: What Southern Mamas Tell Their Daughters that the Rest of Y'all Should Know Too Amazon Price: Buy Now(price as of Jul 21, 2014)
A humorous book that received many positive reviews.
Next >> Creative Organization: 4 Jewelry Display Solutions