If you’ve read any design magazines in the past few years or been in any home decorating aisles you probably know how trendy ruffle shower curtains are. These started out costing over $100 at stores such as Anthropoligie. Luckily, they are on the mass market now even though they may still cost more than what you would typically pay for one. This matches all different kinds and colors of tile and it's my favorite "must have" for bath design this year.

Instead of Anthropologie or West Elm consider Amazon. you can get a similar style for much cheaper! 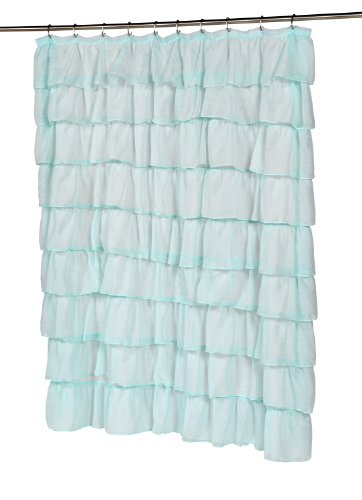 The waterfall style is where one ruffle flows right into another one. Usually they are all of the same width and tend to be a looser and wider design. This is probably the most typical look.Other styles may have ruffles just on one half of the shower curtain or they may form stripes. I don’t often see curtains with varying widths. Sometimes they will form more of a quilt design where the ruffles make shapes like circles. This style is basically everywhere so it's also going to be the cheapest.

Is This a DIY Project?When it first came out I would say it was definitely a DIY project. However I worried about how these would hold up to actual water and steam. Plus, it seemed quite exhausting to measure out all of those strips. Even if you were using the cheapest fabric around it can still get quite expensive when you figure out just how much yardage you will need.  However, now that these have gone down in price so much sewing it just doesn't make that much sense to me.Pink Ruffle Shower CurtainThis can match most design styles. It has all of the texture that you'll need for a shabby chic bathroom. Urban Outfitters has one in baby pink. I would love to see how this would look in a room with a vintage clawfoot tub and a white pedestal sink. Pair it with crystal pendant lights and crisp white molding on the walls. This keeps it from looking like it's suitable for a kids’ room.However, you can look for the ombre effect or a hot pink if you are using this for a kid’s bath. It can also use a white background with pink ruffles. Typically these would match but a kid’s room can use all of the contrast. 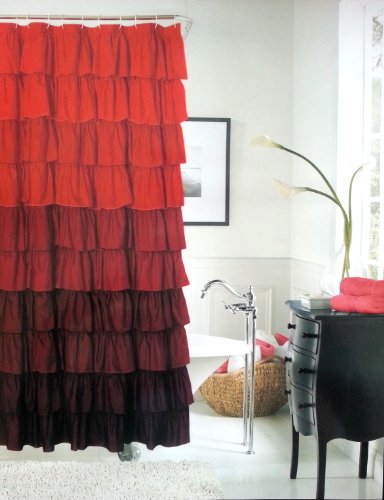 This combines several trends in home decor. Ombre is where one color fades into another through the use of gradients. It also may be one color going darker. I personally like when this starts at white and then fades slowly into green or yellow. Each ruffle may be a slightly darker color until you're all of the way at the bottom of the curtain and you've ended up in a totally new tone.

I think that this is the style that you should choose if you happen to just like the trend or you're planning on spending a lot of money on it. The color will be a classic even if the actual texture might lose in its popularity a little bit. Plus, it will probably match something in your room already such as the toilet or the sink. This is my favorite color for shower curtains just because it makes the room feel so fresh and bright and I've always had small baths; some of them haven't even had windows in them. It helps to ground popular turquoise and gray wall colors while still having a lot of character. If you want to instantly update your bath to the latest trends then upgrade to one of these items.

The trend of ruffled shower curtains started out at least a hundred dollars. It would be for sale at Anthropologie or Urban Outfitters. The brand India Rose was also over $100. This spawned a lot of diy tutorials which required a lot of fabric and sewing and these usually looked droopy and sad. Now you can get it at Bed, Bath & Beyond or Amazon.com for under $50 usually.