If you enjoyed this article then check out my other articles on haunted tourist locations: http://www.infobarrel.com/The_Jennie_Wade_House
InfoBarrel is a writing platform for non-fiction, reference-based, informative content. Opinions expressed by InfoBarrel writers are their own.
InfoBarrel > Entertainment > Film > Television

Who Will Die: The Walking Dead Season 4

Each year the internet is swarmed with news articles predicting who will die in The Walking Dead.  Websites like wetpaint.com commonly predict who will die each season.

Rooting for your favorite character to survive the season has become something of a tradition for The Walking Dead, but sometimes your character doesn't make it.  Surprisingly this doesn't seem to have had an effect on the show.  One might think that routinely killing off characters might have negative effect on the show, but viewership hasn't declined.  In fact it has progressively climbed each season to make it a prize show for AMC's cable lineup.

Before we begin the predictions it is important for you to check out the youtube.com trailer for The Walking Dead season 4 and the reference above for current internet predictions.

What Do We Know?

Now that we have examined current internet predictions for character death's in the Walking Dead season 4 it is important to examine what our chast of survivalists are up against this time.  Also, let's look at past threats and notable character deaths.

Previewing the Next Chapter

Setting the Scene:  Season Three ended on a somber note.  Andrea a major character in the comics died to a zombie infested Milton and the Governor slaughtered most of the armed troopers from the town after they failed to take the Prison.  Rick's son, Carl became a child soldier and gunned down an unarmed soldier from Woodbury.  Additionally, both Rick and Carl became haunted by the death of Lori (Rick's wife and Carl's mother).

Old Threats: Old Threats to the survivalists include Zombies of course.

The Zombies present the survivalists with perhaps the greatest threat.  One bite is all it takes to transform a healthy human into a blood sucking zombie.  In season three, Rick's gang seemed to have a handle on the threat and the zombies became more or less a set piece during the grand battle between the prison survivalists and the Woodbury army.  Now however, the producers have claimed that they will be much more dangerous and present the greatest threat to the prison.

The Governor is another old threat who survived season three despite most guesses that he would die.  He is still out there and this man is deranged.  He will not rest until Rick is dead.

New Threats:  New threats to the show will most likely include an insider.  Someone on the inside of the prison who is working with or for the Governor to cause mayhem inside the prison by unleashing zombies.  This mimics the prison story arc in the comic where one of the inmates who joined Rick's gang of survivalists turned out to be a rapist and killed several members of the cast before finally being stopped.  The comic con trailer (linked above) seems to hint at someone on the inside who is trying to cause destruction.

Now that we have covered old and new threats let's break down the main cast's chances of survival one by one.

The story is centered around Rick Grimes and his band of survivalists.  He is the face of the show and the showrunner in a sense.  The same is true in the comics and after ten volumes he is still kicking.

I would be surprised if he died in season four.  However, producers have been stating that the show could go on if he died.  This means that maybe they are toying with the idea, but in my opinion in would be a mistake.

The Governor has appeared as the major villian of the show.  He has taken Shane's place as the badboy of the show and the face of evil.   However, he does not have a long arc in the comics.  Once the prison/Woodbury arc is settled the Governor loses his place in the show.  I don't think they can keep him around for another season.

Despite being a face of villiany I think that the show will depart for new areas next season and I doubt the Governor will be joining.  One of the main cast will kill him, probably Michonne, and he will fade from the scene.

Carol has become a strong, confident, woman over the past three seasons.  She went from an abused housewife to a powerful hero.  I would imagine that the show will want to continue to build Carol into a heroine and love interest for Daryl Dixon.

Credit: Google ImagesBut, that doesn't mean that killing her off is impossible.  It could be done in a way to heartbreak Daryl or instigate a major plot point.

Michonne is a powerful heroine in the show.  She is smart, ruthless, and a force of good.  Over the course of season three she won her place in Rick's gang while her friend Andrea perished in Woodbury.  I would be surprised if they end her presence on the show after one season.

Carl is transitioning from a child into a man.  Part of the story is his.  He is learning from his father, dealing with the loss of his mother, and becoming a man.  Many of the side stories revolve around this.  I don't think that Carl is going to die this early in the show.  He has a greater chance of survival than his father.  I am confident that Carl will make it through season 4.  That doesn't mean he won't get into any tight situations or his life will be threatened, but he will make it.

Daryl Dixon is becoming the face of the show.  He is popular with the fans and a beloved character, but so was his dubious brother Merle.  Merle's death also stunned Daryl Dixon.  Now that the crisis of the governor has been dealt with and Rick in quiet retirement, Daryl is the defacto leader of the group.  New leadership and dealing with loss could be a recipe of disaster and there is nothing the producers like more than killing off a beloved character.  Additionally, Daryl doesn't exist in the comics so if he dies it's not like there are future plot points the writers of the show are missing out on.  His death could be the big death moment of season 4.

Glen is a character who has gone from a goofy pizza delivery boy to a confident husband.  He has a wife and is starting a family with Maggie.  In the comics he survives for several more volumes.  I doubt that he will die this soon in the show, but it could be a heart breaking moment and those are the moments this show shoots for.

I predict that his death is up in the air and if it doesn't come this season it will follow in the next.

Maggie is the wife of Daryl and has gone from a shy girl on a farm to a major character and love interest to Glen.  I think the show has more in stake for her so I doubt she dies this soon.  I believe that she will outlive Glen on the show and his death will strike a ruthless brutality within her.

Hershel barely made it out of season three.  The first episode he was bite and had to saw his leg off to avoid becoming a zombie.  I don't think that he can continue to survive with one leg especially if the survivalists have to escape the prison which is probably how this season will need to end so the story can advance.  I think Hershel is going to die this season.  I don't know when, but it is something I am fairly confident about.

By now you have read my predictions and some may seem obvious for studious fans of the show, but some may be provoking and surprisingly.  I hope that the show will surprise and provoke all of you this season and I believe my picks will be close to what happens.  However, surprises happen and we don't know what is instore for us yet.

Enjoy the show and check this again in April to see how right I was.  Post in the comments and let me know your predictions for season four. 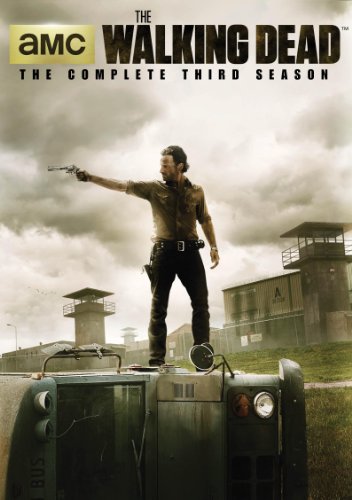 The Walking Dead: Season 3 Amazon Price: $15.78 Buy Now(price as of Jun 18, 2016)
Next >> Lifetime Cable Channel Releases Yet Another Tell-All About Marilyn Monroe