Deborah Diane is a freelance writer from Orange County, California, and the author of a helpful retirement blog:  Baby Boomer Retirement Order Deborah Dian's Kindle books from Amazon or on her blog: "Your Guide to a Fabulous Las Vegas Wedding" "Romantic Budget Wedding Ideas" "The Parrot Trap: A Children's Story" (Gently Teaches Stranger Danger) "The Mayor and the Garbage" (Teen fiction) "Dangerous Lies We Tell to Children and Ourselves" Twitter: www.twitter.com/DeborahDian
InfoBarrel is a writing platform for non-fiction, reference-based, informative content. Opinions expressed by InfoBarrel writers are their own.
InfoBarrel > Lifestyle > Education

Why America Should Use the Metric System

Students in the United States are frequently criticized because our country lags behind other countries in math scores. Unfortunately, we have set our children up for failure because our country obstinately refuses to learn how to use metric measurements. We are the last country in the world to still insist in using our own system of quarts, gallons, feet, miles, etc. in our daily lives.  All the other countries in the world … even very small, poor countries … have managed to convert their countries from their traditional systems of measurement to metrics. Compared to the system we use, there are very few things that confuse people who use the metric system. Americans are constantly confused by our system.

For example, how many people know the number of feet or yards are in a mile? In the rest of the world, any school child can tell you that there are 1000 meters in a kilometer. The metric system of math was originally adopted in France in 1791, and has been recognized as the international standard of measurement since the 1960's.  Originally, the US planned to join the rest of the world community in using it.  However, when our citizens resisted, we quickly gave it up, which is unfortunate.

Most modern technology is designed using metric measurements.  If we want competitive young adults, they need to be able to use metrics as easily as students in other countries.  What are some additional reasons that we should convert to metrics?

The Metric System is Easier

The metric system is based on the number 10. Everything is either divided or multiplied by 10, 100, 1000, etc. If we adopted this system of measurements, we would no longer have to deal with remembering confusing numbers such as 12 inches in a foot, 36 inches in a yard, 3 feet in a yard, 4 quarts in a gallon, etc. Instead, our numbers would be similar to the way we count money … 100 pennies in a dollar, 10 dimes in a dollar, etc. For example, there are 100 centimeters in a meter, and 1000 meters in a kilometer. Easy, right?!

Our Students Will Do Better in Math

Once our children no longer have to be taught the confusing numbers that are in feet, yards, etc., they could start right away, in pre-school, learning about metrics. This one step, alone, could propel our children forward in their arithmetic and math skills. I work with high school students who have not mastered remembering such details as the number of quarts and pints in a gallon. We don't introduce them to metrics until middle school … and so they don't master that system, either. Every year I watch students graduate from high school who have not mastered either the metric system or the American system that they have grown up with! It is such a shame that they have not spent those years learning the metrics.

Science, Medicine, Engineering, the Military and Industry are already Metric

Sooner or later, most American students have to learn at least some metrics in order to work in a variety of fields. If you go into the military, learn to repair foreign cars, become a doctor or a nurse, you will have to learn to use metric measurements. The sooner our children learn it, the easier it will be.

Fewer Critical Mistakes will be Made

Because we have a different system of measurement from other countries, there have been several serious mistakes made in recent years. In 1983, a Boeing 767 jet ran out of fuel during a flight because workers made an error in calculating the amount of fuel needed on an Air Canada flight. In 1999, NASA lost a Mars orbiter because one engineering team used metric measurements and another used our traditional American system of measurement. Some medical errors in the United States have also been attributed to the disparity in different types of measurement.  It's time we stop pretending that there is no reason for our students to learn metrics as their every day system of math.

Every time you buy a two-liter bottle of soda you can see that it does not confuse you. Who tries to convert their two-liter bottle to quarts in order to figure out how many quarts of soda they are buying? Everyone just accepts that they are purchasing two liters of soda. When you purchase medications, the standard unit of measure is often the milligram. Have you ever asked the doctor to convert it to a different standard of measure, such as ounces?

Once Americans come to accept metric measurements, our students will do better in school, our international math scores will increase, and fewer errors would be made in industry and science. It's a win-win situation for everyone.

If you are interested in business, science, and technology, you may also want to read the following articles:

The Amazon Kindle for Beginners

How to Use Google Shortcuts to Save Time

American Made Gifts, Toys and More

Google Adsense App for the iPhone

Teach Your Children How to Use a Metric Measuring Container 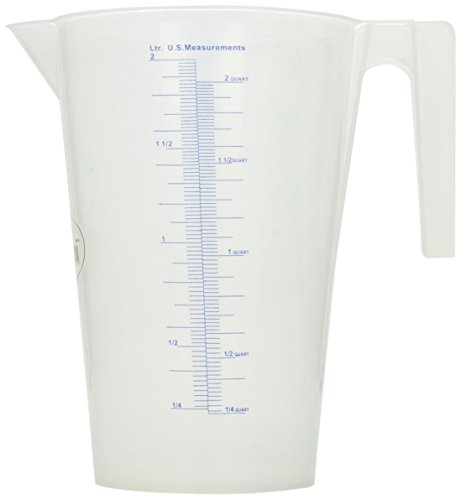 WirthCo 94140 Funnel King 2 Liter General Purpose Graduated Measuring Container Amazon Price: $16.26 Buy Now(price as of Sep 13, 2016)
It's easy to use a liter graduated measuring container, and it is a great tool for teaching your children.
Next >> A Guide to Preparing for the IELTS English as a Second Language Examination