Why Are 9/11 Conspiracy Theories So Preposterous?

We all witnessed the hideous attacks on the World Trade Center on September, 11th 2001. We later found out that these were orchestrated by Al-Qaeda. Al-Qaeda has attacked American interest many times in the past. It just so happens that 9/11 was their biggest one to date.

So, why are people so obsessed with the idea that the government planned these attacks? Some people will say it is because Pres. George Bush is part of a secret society or him and Bin Laden are going to take over the world together. Others will say it was part of the greater plan to invade Iraq and Afghanistan.

Let's go with that theory for a minute. So, Pres. Bush planned these attacks to justify an invasion of Iraq. At first it could be a plausible theory, until it falls apart. Why would Pres. Bush invade Iraq when he could simply invade Kuwait, Bahrain, Qatar, the United Arab Emirates, or Djibouti? These countries are just as important as Iraq, they have the resources, plus they already have some U.S. military facilities in them. People will state that George Bush had to get back at Saddam Hussein. But didn't George Bush get back at Saddam Hussein by sanctioning Iraq into oblivion? As of 2003, Saddam Hussein didn't even have an air force that was capable of getting off the ground. Ultimately, the U.S. invaded Iraq with over 150,000 troops. We can conclude that Iraq was simply just too big of a country to occupy.

Others will state that Pres. Bush stole all of Iraq's oil. So, why do Chinese, Russian, French and Canadian oil companies have the drilling contracts there? Sorry guys, Pres. Bush didn't get a chance to change the capital from Baghdad to Halliburton! Furthermore, if the U.S. did control all of Iraq's oil the price would be around $30 a barrel. Iraq has some of the largest oil reserves in the world.

OK, now let's move onto the other conspiracy theory. Pres. Bush planned the attacks to stage an invasion of Afghanistan. Historically, many nations tried to occupy Afghanistan. Britain tried and failed, then the Soviet Union took a shot at it and failed. What would make anyone believe the U.S. would be able to occupy Afghanistan. Moreover, what does Afghanistan have that the U.S. would want so much? You may respond, various minerals, the U.S. has these minerals as well. Besides if Pres. Bush did plan this invasion he would not have invaded Afghanistan, he would have invaded Turkmenistan. Why, you may ask? Simply, because Turkmenistan borders Russia, it could eventually join NATO. Furthermore, Turkmenistan has access to the Caspian Sea. Which sea does Afghanistan have access to?The Caspian Sea would give U.S. naval bases access to Russia and Iran. As we can see the grand plan of Pres. Bush's invasion of Afghanistan is looking pretty grim.

So, what will other conspiracy theorists say; how about WTC 7? Pres. Bush planted explosives in the building. Well, even if he did, why would the building have exploded at 5:20 pm that day? Wouldn't the explosives have detonated in the morning, sometime near the other attacks?

We can clearly see that 9/11 conspiracy theorists did not do their homework. They love to believe they are smarter than others by expressing their weak hypothesis to whoever is willing to listen. 9/11 was a tragic event where almost 3,000 people died by the hands of ruthless terrorists. Al-Qaeda had their own motives and goals who unfortunately used their sleek tactics to penetrate through American defenses and caused absolute destruction. 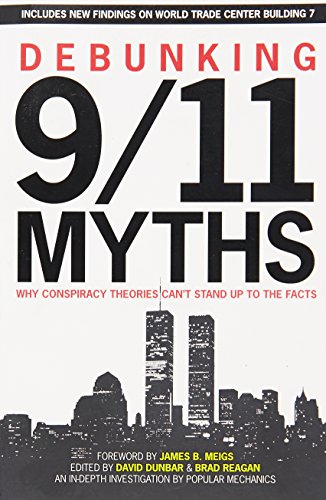 Debunking 9/11 Myths: Why Conspiracy Theories Can't Stand Up to the Facts Amazon Price: $17.95 $4.99 Buy Now(price as of Nov 26, 2016)
Next >> Fashioning a Reign: 90 Years of Style from the Queen's Wardrobe - Magnificent Exhibition at Buckingham Palace