Why Do Cats Urine Mark?

According to charities, one of the most commonly reported behavioural problems in cats is inappropriate elimination.  Around 10% of all cats will at some point deposit their waste outside the litter box and one of the main reasons for this can be the litter box itself.  However, for around a third of these animals, the problem isn’t so much a problem as a behaviour – they are using their urine to mark their territory in a form of communication with other cats

Some species of animals live in groups and have developed various means within that group to prevent conflict through interpersonal ranking.  This means they are either a leader or lower in the rankings and know from the body language of other animals where they rank in the group.  But cats don’t have this type of social structure in the wild, as they don’t live in groups.

The wild ancestor of the domestic cat and most of the cats in the wild today claim their own territory once they are mature.  There may be some sharing of territory with another cat but they don’t have the pack hierarchy the way dogs do.  This means that if they run into another cat, they can have an argument of sorts that can lead to an injury.  To avoid this, cats leaves messages that tell another cat where they are and allow them to avoid most disputes.

There are lots of ways cats can leave these messages and one of the most powerful is with urine marking.  This tells the other cats they are present, what area is theirs and even when he was last present in a particular spot.  It can also be a dating advert when a cat is looking for a mate.  All of this means that cats don’t need to meet each other to know a lot about one another and fights can be avoided.

House cats don’t need to mark territory or find a mate in the same way but their instincts can still tell them to act this way.  A cat that has been neutered is far less likely to try to spray their home and a cat that is happy and content is also less likely to feel the need.  A house cat that marks its territory is liable to be doing so because something in the house is creating the urge.

Source of the problem

Understanding the difference between marking their territory and having a litter box problem takes a little work but can then be used to understand better the underlying problems.  The following list can be used to determine what the nature of the problem is:

Urine marking can also be triggered by a number of events.  One of the main ones is that there is more than one feline in the household, meaning the cat spraying has the urge to mark his territory for the others.  A change in the household can also bring on these behaviours as it causes stress.  Everything from getting another cat or a dog, remodelling the kitchen, changing work hours or even bringing new items into the house can bring on stress and urine marking problems. 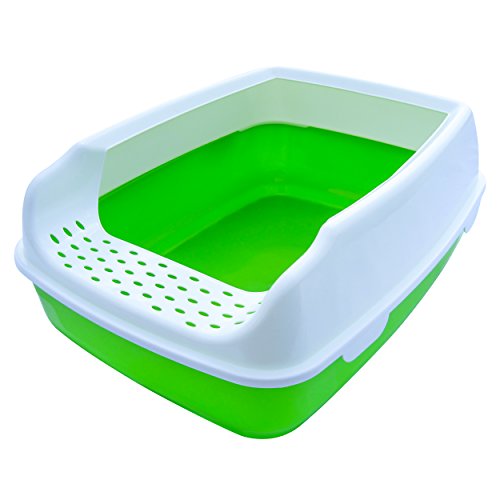 Dealing with the problem

There are many steps to be taken to stop urine marking problems once the cause has been discovered.  In unneutered cats, advertising for a mate and marking their territory can be eased by neutering them but something as simple as shutting blinds and windows so they can’t see the other cats in the neighbourhood.

Understanding if there is a medical problem involved is the next step so speaking to your vet is a good idea.  If there is no underlying medical problems, next look at problems with the litter tray.  If they are eliminating elsewhere than the tray, it may be because the type of tray or even litter being used makes them uncomfortable.  If there are more than one cat in the household, using a litter tray for each is also a way of eliminating problems.

The placement of the litter tray can also be important as if it is in a high traffic area, the cat may feel uncomfortable using it.  Regular changing the litter and removing the waste is crucial to ensure the litter tray is inviting to the cat.

If the problem is definitely urine marking, then there are other steps taken to stop the action.  Clean up the spots with an enzymatic cleanser that is customised to reduce the odours of cats, available through most pet stores.  Also, use a product that includes a synthetic cat pheromone that can work to alleviate stress and the urgent to spray.

Finally, there are a few thing to never do to deal with the problem; never rub the cat’s nose in the mess, shout at them or throw things at them to make them stop.  Also when cleaning up, don’t use an ammonia based cleaner as urine has a high amount of ammonia and this will simply encourage the cat to come back and refresh their own smell.