Why Every Cat Needs a Cat Activity Centre

A cat activity centre is place your cat can go to relax, sleep, play and let out those urges they naturally have, for example scratching and and jumping.  It was when me and my partner rescued two kittens and brought them home to live with our other cat we realised that a small scratching post was not going to be sufficient enough to keep our three cats occupied.  Yes, at the time our eldest cat went outdoors but the two kittens were too little to go outside and were running riot in our house. So I tried to find something I thought could keep them occupied......and away from our poor furniture.  I searched for large cat scratching posts and came across these activity centres and as I am, unfortunately, an impulse buyer just had to get one and see what they were all about.

This is the first one I got my hands on.  It had multiple levels for my kittens to chase each other on and sleeping areas which they used all the time instead of their beds.  It had multiple poles for them to scratch which saved my sofa and carpets from getting ruined......even more then they already had been before the cat activity centre came into our lives.  My boy kitten Fudge used to love laying on the top of the highest sleeping tube looking out at the garden.  My eldest cat Chewy would try and chase them out of the sleeping places so he could go in their too.  It was perfect but we moved house and we sadly lost our oldest cat and then we adopted another cat and three fully grown cats was starting to make our activity centre a bit wobbly as they all loved it so much.  So me being the impulse buyer I said I was got an even bigger one.

So this was our next one.  It was a lot wider so our three cats (two are, not fat, but large cats) had more space to pounce, chase and play on it.  All three of my cats are indoor cats as well so they needed a bigger one to keep them occupied.  Fudge and Ellie loved the two, what I call, hammocks in the middle of the centre.  We placed it so they could look out the windows as they lay as well as look at the birds going past etc.  The two boxed sleeping places also gave Fudge and Pixie a place to hide when the dreaded hoover came out too!  Then a couple of months ago one of my rabbits became ill and we brought both of them into the conservatory while he got better.  Of course not thinking to take the activity centre out they have now wrecked it which has given me a fantastic excuse to get another one.  This is the one I am planning on getting in the next few weeks: 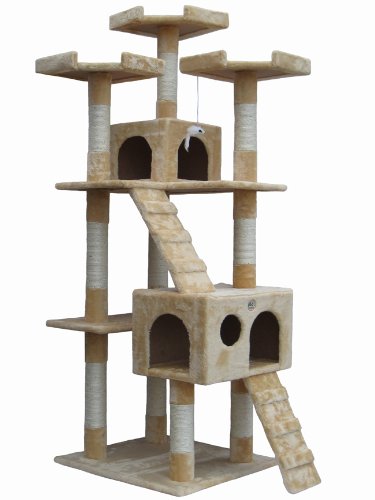 Of course as the rabbits have taken over the conservatory we are going to put our new one in our dining room......which is not used as a dining room.  This means we need to downsize a bit so this one is smaller in width though just as tall.  I love the fact it has three outside sleeping places at the top.  This is perfect for my three and it still has the two inside sleeping places as well as the many scratching posts for them to dig their claws into and ledges to pounce and play on.

All of mine showing how much they love their cat activity centre :)

The picture above shows how valuable these cat activity centres are.  Mine love it and as they are indoor cats as well it gives them that exercise they need, by jumping up and down it and chasing each other on it, to lose the weight they would otherwise not lose because before it they would have been bored and just laid around. The site http://www.catactivitycentre.com shows more information about these and other things such as cat illnesses and keeping an indoor cat.  I made the site because of my love of cats and activity centres. I cannot wait to get our next one. One thing is for certain though.......the other half can put it together for me