Find out more about me on my writer's webpage Check out my books on my Amazon Author Page
InfoBarrel is a writing platform for non-fiction, reference-based, informative content. Opinions expressed by InfoBarrel writers are their own.
InfoBarrel > Lifestyle > Religion & Spirituality > Metaphysical

Why Meditation Is Bad For You

Your Mind Without Meditation

The Multiplicity of Things

Meditation Free For All

Meditation is everywhere. You’ve probably at least tried it or thought about trying it.

Search “meditation books” or “meditation music.” Google and Bing reward you with an avalanche of possibilities.

It’s no surprise then that the legion of new meditators has flooded the world with peace, love and brotherhood as never before. Sitting quietly with our mantras has shown us how intimately we’re all connected, not just to each other, but to the rocks and trees and oceans.

We’re part of the seamless web of universal unity.

Meditation has taught us to tame the resistance and turmoil in our bodies that has always made us sick. Stress and depression swept away like grime hit with a push broom.

But wait a minute? Has any of this really happened?

Has all this meditation made you or the world better?

Or, like yoga, has it just treated us to a bunch of new tricks, almost all virtually useless in the real world of sticks, stones, jobs, bosses and bills to pay?

Is Meditation a New Age Waste of Time?

No, as a meditator for many years, I am happy to say, it isn't.

But a lot about meditation isn’t about making anything better but more about another gateway to escape the realities we’d see if we weren’t so focused on our navels, chakras, mantras and whatever the catchy word is for empty-mindedness.

What’s the big draw about meditation? One thing, its otherness.

It defies the materialism, the constant upsweep of capitalist consumption that keeps the freight train of American culture steaming along a track where any glance sideways is a kind of treason.

Meditation clears out the detritus constantly piling up in our minds. It stills those demanding threads of chatter. Our stories pause to take a breath.

Under any circumstances, that’s damned attractive. If you’re as repulsed by the shallow parade of selling and buying that passes for American culture as I am, an easy retreat is as refreshing as a shower.

In fact, one of our best inspirational speakers, Marianne Williamson, has said she’d no sooner missed her daily meditation than she would her shower.

I don’t know about you, but without that period of stillness, I also feel a little dirty, like I’ve let too much of the grit stay on me for too long.

Gotta get in the shower, the relaxed meditation position, to feel right again.

But You Said Meditation is Bad for You

Okay, so it’s not as bad for you as an holistic creature as a trip to the shopping mall, but neither is getting lost in the woods.

As long as we’re still in the vicinity of cultural allusions, one way we’ve been taught to find the root of evil is to “follow the money.” There’s a New Age corollary. You follow the uselessness.

No, meditation is not by definition useless. Neither is capitalism. But it’s all about the tools.

If you take capitalism as a tool that gets you spending in the materialist vortex of consumption, you’ll be fat and empty soon enough.

If you use meditation to escape, then escape you will get. But is that really the point?

Take your choice of titles: God, Source, All that Is, Mother Nature, Whatever is Responsible for Rush Limbaugh, Anything... Did She, He or It outfit you for life on this green, brown and blue orb of plenty so you could learn to escape?

The opposite, I think. 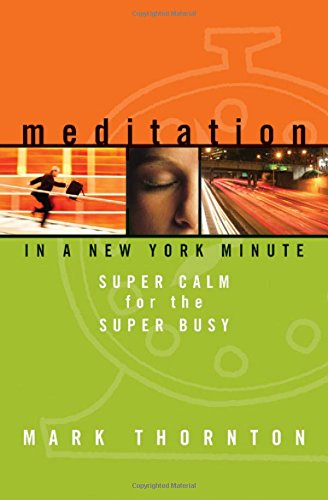 Meditation in a New York Minute: Super Calm for the Super Busy Amazon Price: $12.95 $1.86 Buy Now(price as of Dec 26, 2016)
What I liked about this book, the one that really got me started, was how it was embedded in reality. Mark Thornton wasn't pitching escape, he was talking about digging in deeper, absorbing more. And it was so practical. He taught me to meditate anywhere, any time.

The Multiplicity of Things

In The Tao of Physics, a seminal book that fed the New Age, Fritjof Capra expressed it well. When you calm your mind, “the multiplicity of things disappears.”

You’ve got to admit, it has a damn nice ring to it.

And calming the mind is what we’re after in meditation, isn’t it? We want it all cleared out. The transcendental janitors come in like the crew after a barn dance, and before you know it, the scene is washed up and uncluttered again.

Most meditators do that every day, and on the days when nothing intrudes or interrupts, the multiplicity of things does disappear. The air is clean and mellow and peace persists.

That’s one hell of a lot better than spending fifteen minutes observing shoppers at the Mall of America, but is it really a worthy goal?

Isn’t the multiplicity of things, well-chosen and integrated, what we really want?

Mentioned Above - The Tao of Physics 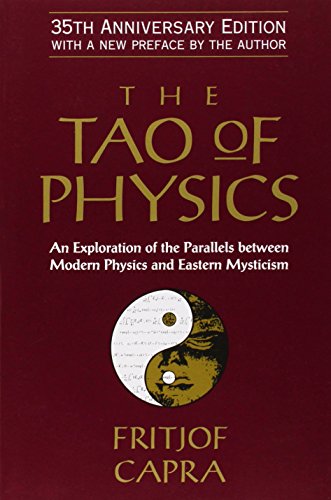 The Tao of Physics: An Exploration of the Parallels Between Modern Physics and Eastern Mysticism Amazon Price: $17.95 $10.00 Buy Now(price as of Dec 26, 2016)
Capra almost invented the New Age with this book. By describing how much modern physics and ancient mysticism had in common, he broke down the barriers between them and opened up understanding to millions of people like you and me. Once the insights of quantum physics and Zen awareness were accessible, perceptions about reality changed fast.

How to Get Lost in the Woods and Walk into Trees

The multiplicity of things Eastern mysticism wants us to eschew is, guess what?

That dreaded bundle of twine is reality. It’s life. It’s sticks and stones that sometimes break bones, and it’s love and sisterhood, and it’s your Aunt Minnie.

Do you really want all that to disappear?

If you can’t see trees, then you get lost in the woods, but even lost, you bump into invisible obstacles — like those trees your calm mind erased. They don’t go away, just because you can’t see them anymore.

And the same is true of war, climate change, racism, brotherly love, commerce, Brad Pitt and Waltons reruns. You might want to keep your eyes on them.

In fact, we need you to keep your eyes on them.

Every person who dodges the multiplicity of things is one soul we can’t count on to stir the mix of reality. Each person who escapes shifts the load to someone who already has enough to carry.

Now, that wasn’t what you had in mind when you sat down to meditate, was it?

No, I’m not one of those writers who topple illusions without having a blueprint for rebuilding something better. And I’m happy to say my blueprint is about as easy to follow as it gets.

You barely have to do anything. You can even keep up your meditation routine. You can get calm and feel your body fill with healthful energy.

But you need to stop reaching for nirvana or any other sparkly thing. Remember how the possessed girl swiveled her head around in The Exorcist?

You need to do that. Without the bloated face or the vomiting, of course.

When you breath deep, focus not on emptiness but on fully absorbing all that is. Listen to the little sounds around you. Feel the breeze. Let your mind play its fantasies. The whole trick is to maintain that deep-breathing calm and awareness.

I do this every day, and I promise you, as an experienced lab rat, that I exorcised many ghosts, fears and misconceptions because when you absorb the wholeness of reality, fakes, imaginary demons and invisible enemies melt away.

What makes your gut twist — or your undies get in a knot, if you prefer the lighthearted version — is partial awareness. Yes, there is evil in the world, but it’s minuscule compared to what the mass media sells you.

And you need to watch out for rapists and muggers, thieves and snake oil salesman, but isn’t that just easier when you can see them coming a mile away?

The multiplicity of things will find you, if you don’t embrace them first. Lust for life in all its complexly woven symmetries and mismatches looking for balance.

Speaking as a lab rat again, I promise that you will fall in love with it. Reality, I mean.

Next >> Book Review - The Law of Attraction: The Basics of the Teachings of Abraham