Why Older Homeowners Need to Check Out Home Insurance Offers

It used to be loyalty was a good thing. That is, until unscrupulous insurance companies started taking advantage of it. As many older homeowners are beginning to find out, not shopping around for better home insurance offers has been costing them way more than it should— in fact, insanely more.

Statistics show that nearly 40% of older homeowners are hanging on to the same policy that originally came with their mortgage— for as long as two decades in most cases. The complacency often stems from the assumption that finding a better deal elsewhere will be too much of a hassle. Plus, many assume that since they have been paying so faithfully over the years, their insurance company will be right there if and when they need them.

While this is a nice sentiment, it doesn't exactly stand on its own when there are so many honest insurance companies out there willing to offer the exact same policy— if not better— at a remarkably lower rate. It also doesn't speak well for insurance companies who keep a competitive eye on their rivals' figures and continue to raise the rates on their most loyal customers.

Older customers are typically considered a lower risk since they are home more often, making them less likely to be burgled and able to spot accidents and emergencies more quickly. Yet, studies show they pay more than any other age group.

Unfortunately, many older homeowners assume that's just the way the game is played.  They also fear no one will cover them if they have filed one or more insurance claims over the years. Again, even raising the rates on a home that has been extensively damaged and rebuilt seems dodgy considering the property, with all its new components, would be less of a risk than before.

Experts say that older homeowners who are not as internet savvy as younger generations don't have a way to access the wide array of websites that offer hassle-free home insurance offers. What they seem most aware of are the tactics that blackmail them into staying where they are in the form of hefty cancellation fees.

Recent analysis has shown that competition between providers has led to a drop in home insurance prices over the last year but the benefits can't be taken advantage of if consumers don't shop around. However, this is exactly what some insurers are counting on with older customers.

Luckily, there are upstanding insurance companies that will not only provide a better policy at a lower rate for older homeowners; they will also cover the cost of cancellation fees for those who make the switch to their service. One of those companies is Age UK Home Insurance, who recently announced it will gladly cover cancellations fees up to £40.

Insurance companies with an eye on customer service feel there are better options for the hard-earned income of older homeowners. While these companies are certainly looking to build their customer base, they also want to repair the damaged image the home insurance industry has received over the years. Raising the rates on customers merely because they will accept it is simply no way for a reputable insurance company to operate.

Since it is unlikely that older customers will reach out to them, many insurance companies are making an effort to reach out to these new customers through telephone calls, radio and magazine ads and door-to-door sales. While it is not always easy to talk finances with one's parents, it can be extremely helpful for those with older parents to sit down and discuss the option of finding a cheaper home insurance policy if the existing coverage is outrageously overpriced.

The conversation is likely to go much smoother if the parent who handles the finances can see several comparative quotes from reputable home insurance providers. There have been many cases where older home owners have seen their annual premiums drop from the high 900's to the mid 300's. Even if they are fiercely loyal to their insurance company, this kind of figure can be hard to look past. If they still won't listen, it can be really fun to finally turn the tables and remind them of all the years they lectured about being wasteful with money. 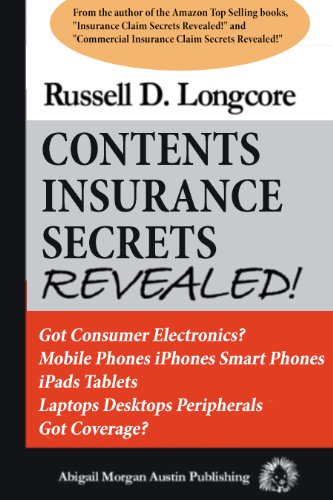 Contents Insurance Secrets Revealed! Amazon Price: Buy Now(price as of May 14, 2015)
Next >> Talk With Your Home or Renter Insurance Agent