Save Even More on Energy Costs

An energy monitor for your home will tell you how much energy you are consuming on a day to day basis. This information is great for keeping track of your overall energy consumption, but it has limitations when it comes to actually detailing that consumption. After all, these monitors will not tell you how much energy individual appliances are consuming, thus making it hard to pinpoint where you need to make energy efficiency improvements within your home. In this case, plug-in energy monitors are ideal. A plug-in energy monitor, also known as a socket monitor, is plugged into a single socket and will thus tell you the energy usage of any appliance that is also plugged into that socket.

These devices can be particularly useful with power strips, as they will be able to calculate the overall energy consumption of sets of appliances, such as a computer together with its monitor, printer, and other accessories. By knowing which accessories are consuming the most power in your home, you can make the necessary adjustments to make sure they are consuming less in the future. In this article, we will look at three popular socket monitors, the Belkin Conserve Insight, the Efergy Energy Monitoring Socket 2.0, and the Ecotek monitor.Belkin Conservative InsightThis monitor will only display the most vital energy information, displaying your usage in watts, pounds, and carbon emissions. Unlike other monitors, it will not display more detailed information such as voltage or current. For most people, however, this detailed information is often unnecessary. Where the Belkin Conservative Insight really excels is in its design. It is very intuitive and easy to use, with just three buttons that can be understood quickly. Furthermore, this monitor is ideal for sockets that are behind furniture or other hard to reach places, as the monitor itself is separate from the plug (being attached only by a cable). As such, unlike other monitors, with this device you don’t need to worry about bending over into difficult to access areas in order to take an accurate reading. Lastly, after being plugged in for at least 45 minutes, the Belkin Conservate Insight will calculate the yearly cost of your accessory based on your usage patterns and will update this figure for as long as it is kept plugged in.Efergy Energy Monitoring Socket 2.0Efergy’s follow up to its highly successful original energy monitor, the Socket 2.0 distinguishes itself through the vast array of information it provides consumers. Like the Belkin device, it calculates data in watts, pounds, and carbon emissions, and will also calculate daily and yearly cost of devices, but it goes further by also providing information in volts, amps, herz, power factor, and maximum power. For those who are on Energy 7/10 tariffs, the Socket 2.0 can be programmed to calculate two different energy tariffs, and its internal battery allows it to store memory about your usage even when it is unplugged. Finally, the large screen is particularly useful and makes all the information clear and easy to read.Ecotek MonitorLike the Efergy device, the Ecotek is also distinguished by the great variety of information it provides, including information in watts, volts, amps, herz, and power factor. For those that need this kind of detail, then the Ecotek is ideal. Similarly, it also has an internal battery that will store all the memory about your device’s energy usage regardless of whether the monitor is plugged in or not. The Ecotek’s small size also makes it the most inconspicuous of the monitors mentioned here, although on the other hand some consumers have claimed that the small display screen can be difficult to read. Regardless, the Ecotek is a sound choice for those who need to know which appliances are consuming the most energy in their homes.Socket monitors are a great way of finding out which appliances, such as televisions, dishwashers, and refrigerators, are the biggest culprits when it comes to energy consumption. By knowing the details of each appliance’s energy needs, you can either tweak them to make them consume less or replace them altogether with more efficient products. For those who are looking to lower their carbon footprints and save money on their next energy bill, plug-in energy monitors are an extremely useful device. 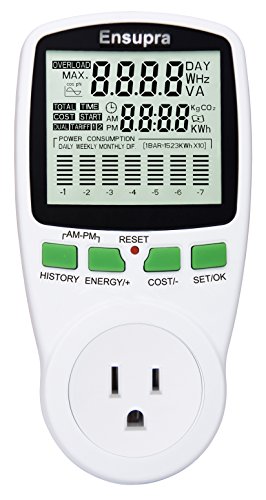