Before you settle on any brand new pair of high quality snake boots, it's extremely important that you know the top of the line from the middle of the road.  If you want to read up before making the purchase, then check out this excellent snake proof boot review guide.
InfoBarrel is a writing platform for non-fiction, reference-based, informative content. Opinions expressed by InfoBarrel writers are their own.
InfoBarrel > Lifestyle > Outdoors

Why Snake Bite Protection Is So Important

You need to protect yourself from venomous snake bites!

While snake bites have declined over the years, as have the deaths from said bites, these can still be a dangerous hazard when turkey hunting out in the wetlands or up hunting deer or elk through the mountainous forest regions of the Rockies or Appalachian Mountains.  You don't want to be surprised by a hidden rattlesnake, water mocassin, or copperhead.  To say that can ruin the day is an understatement of pretty epic proportions.  Venomous snake protection is an important topic for any hunter or outdoorsmen who wants to make sure a fun funting trip doesn't end in pain or tragedy because of one harsh strike.  While venomous snake bites are rare, and deaths even more rare, they still occur and the right medical treatment and right protection are two of the biggest reasons that these numbers have dropped to acceptable levels.

Recent US Numbers on Snake Bites

The actual numbers of people who were bitten by venomous snakes and those who died from them can be hard to pin down for a variety of reasons.  There are many people who live like hermits away from civilization, there are people who go missing in the wilderness, and then there are those who just don't properly report it and put away on family plots.  However there are some strong general numbers out there and accoding to the CDC there are approximately 7,000 to 8,000 reported cases of venomous viper bites each year, but generally an average of only 5 deaths.  The FDA estimate on these numbers are higher with 8,000 bites a year but 9 to 15 deaths per year.

The biggest reason for this comes in the form of proper medical care being quickly and fully available in the far majority of areas in the country.  Often time the largest complications come with older individuals who are bitten, or if the person has anaphylactic shock as a result of the venom entering the blood stream.  The numbers might be higher, but in general this is a fairly accurate year on year estimate.

Across the world there are over 20,000 estimated deaths per year due to these viper bites, most in Asia and sub-Sahara Africa.  The lack of good medical care and more venomous snakes is a large part of this but don't be thrown off by the small ratios of death to snake bites: a bite from a rattlesnake, water moccasin, or copperhead is a very serious matter and if let untreated will almost certainly lead to death.  What isn't kept are the records of people who suffered issues with dead flesh, permanent nerve damage, or even lost limbs.

Even people who ended up fine in the long run often suffered long bouts of pain during recovery, and for many people snake venom can add to complications that cause other permanent damage.  Limb loss is not uncommon, especially if the person was in an isolated area when bit and had to exert a lot of physical force to get to medical treatment.  The same often happens if a tourniquet is applied, which is why this action is so frowned upon unless there is truly no other option.   Whether dealing with mountains, woods, or desert rattlers - a tourniquet should be avoided if at all possible.

It's also important to note that even when a victim gets the necessary anti-venom treatments, they don't always work.  There are often complications associated with snake bites and those can often still cause lasting damage or even kill the victim after anti-venom treatments have begun.

There are a few methods of offering some good snake bite protection for hunters, ranchers, and others heading out into the wild or into habitats that are home to many of these creatures.  One of the most important pieces of equipment you can grab is a snake bite kit.  When properly used these can help remove a good portion of the venom that is injected from the fangs into the bite area.  The more poison that can be removed from the bite site, the better your chances of survival.  This will also help to minimize the potential tissue damage to the afflicted area.  While complications can still ensue, the less venom in the system the better off you'll be.

Snake proof hunting boots are the next huge option.  This survival footwear is offered by a wide range of companies and provide protection up to the knee against strikes from a pit viper.  The majority of bites take place from the knee on down which is why these boots are such effective pieces of protection. 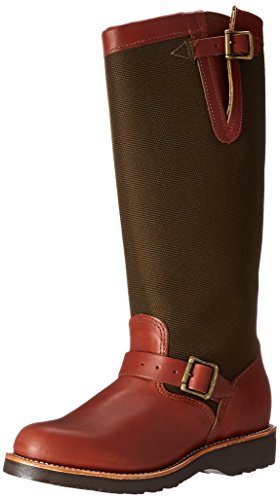 Chippewa Women's 15 Inch Expresso Viper Cloth Snake Boot,Brown,5.5 M US Amazon Price: $279.99 $239.95 Buy Now(price as of Oct 30, 2015)
This is one of the most popular forms of snake boots out there. Chippewa is the one of the top lines, and there's a reason it's frequently considered one of the best snake proof boot companies out there. There are several similar versions made for men, as well.

A snake bite kit can save your life!

A snake bite kit might seem like a small thing, but for only $10 you can end up not just increasing the chances of not losing a limb and of having a full recovery but it could even save your life as the video below shows.  Snake bite kits should go along with a pair of snake hunting boots to help protect you from all the potential dangers that can happen.  If you've ever seen a picture of a rattlesnake bite, it's not pretty.  And in those pictures you're just seeing the outside signs of swelling and discoloration - you're not seeing the inner damage like muscle tissue dying.

Ideally any rattlesnake first aid, or first aid for any snake bite for that matter, should start with a bite kit because that will do the most immediately good when you're out in the field.  These kits are inexpensive but can literally become life savers, as the video underneath goes to show.

Why you NEED a snake bite kit

You NEED to have a good snake bite kit

This is one of the most popular snake bite kits on Amazon.com and there's no question it's worth the investment! This snake bite venom extraction kit can literally SAVE YOUR LIFE!! Don't leave something like that to chance - especially when the price is that incredibly low!

For those of us with a huge fear of snakes, and I am one of those people, the thought of seeing a gardner snake slither across your foot is enough to send you leaping up into the trees, much less getting to big diamondback rattlers or the thought of a copperhead snake bite.  These are nightmares to me (don't even get me started on the viral video of a big python opening a door) but I recognize that these snakes are a very necessary part of the ecosystem and that the far majority of the time even venomous snakes really are much more scared of you than you are of them.

That means one of the best things you can do to avoid snake bites is to leave the snakes alone.  While there are many different stories of snakes sneaking up on young kids and biting them or just lashing out, it's surprising how often out of the 9,000 cases come up because of hunting (which the boots and kit can help make you safer), or most often when a lot of booze and messing with a snake, or attempting to kill a snake.  The combination of a lot of booze and deciding to kill a venomous snake leads to most snake bites.  Avoid these situations, take proper precautions, and you may get to the point where you can really enjoy the natural beauty of these creatures...even if it's still photographs through a computer screen.