trufflehunter is a full-time copyeditor by day and an InfoBarrel addict by night. Want to join her in her quest in writing for money? Join InfoBarrel now for free and start getting paid to write about what you love!
InfoBarrel is a writing platform for non-fiction, reference-based, informative content. Opinions expressed by InfoBarrel writers are their own.
InfoBarrel > Health

Yakult is a tasty, healthy, probiotic milk drink which contains good bacteria that are healthy for our guts.

How did Yakult come about?

First produced in Japan in 1935, Yakult is made by fermenting a mixture of skimmed milk with a special strain of the bacterium Lactobacillus casei Shirota.

This bacterium strain was discovered by Japanese scientist Dr Minoru Shirota (1899-1982) and has been scientifically proven to reach the gut alive.

The name was derived from the word 'Esperanto' which means 'yoghurt'. However, it is not a yoghurt but rather, fermented milk.

A standard Yakult contains 18g of sugar for every 100g, which the UK Food Standards Agency considered to be 'High'. In comparison, Coca Cola and orange juice are in the range 10g of sugar per 100g. However, Yakult is served in much smaller doses and the former have no good bacteria whatsoever.

Why is Yakult good for you?

Other facts about Yakult

Introducing the Yakult Ladies System: Yakult at your Door-Step

The Yakult Ladies System was introduced in 1963 in Japan. This is a door-to-door distribution of Yakult by pleasant, dynamic women to help people understand the benefits of probiotics by bringing Yakult products to them everyday, be it to their homes or offices.

In Japan, Yakult comes to the people.

Credit: http://commons.wikimedia.org/wiki/File:Yakult_delivery_bicycle.jpg
Pictured above is a Yakult bicycle in Sapporo, Hokkaido. Today, there are over 80,000 ladies across the globe. In Japan, most Yakult ladies are mothers. They often build relationships with the families they deliver Yakult to. One can imagine the familiar sight of a Yakult lady speeding down alleys and propagating good health and cheer around the neighborhood.
Internationally, this system has been the backbone of Yakult distribution in over 10 countries. Each Yakult lady is given specific training and allocated a specific area of distribution. She earns a commission on each bottle sold, hence allowing her to become financially independent.

Made expressly for the Japanese market, Yakult AOJIRU No Meguri is made from young barley leaves containing yakult dietary fiber. The barley leaves are grown in the Oita prefecture without agricultural chemicals and fertilizers.

Loosely translated, aojiru means green leaf drinks (ao = green). It comes in a powder form and is a good health supplement particularly for those who take irregular meals.

Although the instructions say to dissolve in 100ml of cold water, don't do that because it will probably taste horrible! Instead, dissolve in sweetened soya milk for a refreshing, sweet and healthy beverage. 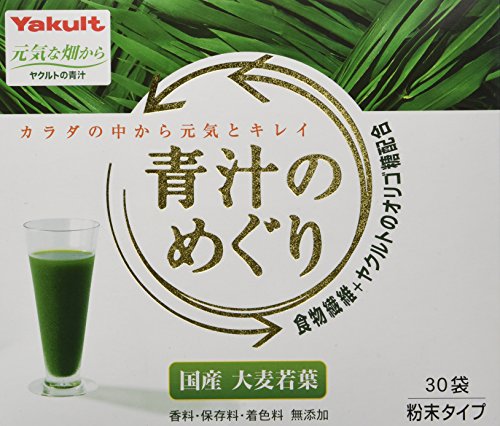 If you're living in the USA, you can find stores selling Yakult via a store locator. You can even sample it for free at in-store demonstrations.

Probably the only thing bad about this product is that they don't usually have discounts, even when buying in bulk. This wouldn't be so bad if it wasn't so tasty! Given the amount of junk we eat everyday e.g. fast food, unhealthy snacks etc., everyone could do with more good bacteria in our guts. Cheers to Yakult, the probiotic drink that's your digestive system's best friend.