Thanks for reading!
InfoBarrel is a writing platform for non-fiction, reference-based, informative content. Opinions expressed by InfoBarrel writers are their own.
InfoBarrel > Technology > Mobile > Cell Phones

Why the New iPhone Really is the Best Ever

The Best Things About The New iPhone 5

Apple reveals the goods on their latest iGadget

Yesterday Apple announced the iPhone 5 to the rest of the world.  And while the event may not have been the same without Steve Jobs at the helm, the new iPhone stole the show, as usual.  This is the 6th iteration of Apple's iconic smartphone, and it just keeps getting better.

Apple's presentation was tightly focused on the details, not the flash that we're used to seeing at these events, but the phone is what it's all about.  There are a lot of changes. Are you ready? Nerds ho!

For starters, the new iPhone is taller. Not by much, only about a third of an inch, but it's enough to make it stand head over heels over its predecessors, the iPhone 4S and 4. The added screen space will allow for 6 rows of icons instead of the current 5.  The diagonal screen size of the Retina display is 4.0 inches, and boasts a 1136-by-640 resolution.

The iPhone 5 weighs in at only 3.95 ounces, versus the 4S' weight of 4.9 ounces. That's a weight reduction of 20%.  I don't know what kind of magic these guys have been up to, dropping all that weight while adding more amazing features than ever, but wow!  The iPhone 5 also trimmed its waistline: It's now only 7.6mm thick, a cut of 1.7mm.

Another major improvement is the processor.  The iPhone 5 boasts Apple's own A6, which Apple says is 22% lighter and has twice the CPU speed and graphical power inside.  This means faster display times, faster image saves, faster music launch, and faster coffee.  OK, the 5 doesn't make coffee, but it would be faster than ever if it did. Apple didn't really divulge the deeper details about its new chip, like whether it's a quad-core with quad-core graphics or what, but let's just rest our little heads knowing it's faster.

225 hours. That's how long the iPhone 5 can standby. That's almost 9 1/2 days!  If you don't use your phone over a nine-day span, you're either on a killer vacation, or you lost your iPhone 5 already. Apple says it can browse the web over LTE for eight hours, and watch video for ten.  Now get back to work.

Credit: Apple, IncFor you photobuffs, Apple has something for you, too.  The camera received some love in its image stabilization. The A6 is killer at capturing images (40% faster), has better spatial noise reduction (I don't know what that is, either), and has improved low-light performance.  And what about taking pictures while recording video?  I don't know why video isn't enough, but yep, it's in there, too.

If you get lost playing with all the new features, don't worry: Siri will bring you home.  The iPhone 5 has Siri built-in, and it was grand of Apple to leave the 'S' off the iPhone 5's moniker.  If it's going to be a standard feature from here out, there's no need mentioning it ever again.  That would be like mentioning your new sneakers have laces.  That's nice.

Apple has incorporated its own mapping system into iOS6.  I've had a chance to try it out for the last few weeks, and it's close.  It's not there yet, though.  In fact, just yesterday I was trying to navigate a friend from the Interstate to a restaurant we were having dinner at, and I had to revert to Google Maps to get a good re-route.  The most direct route was actually closed, and neither Apple nor Google were aware of this, so in my attempts to send an accurate map link, I was only able to get this to work with Google.  This is not a deal-breaker in my book, however.  I love adventure, and getting lost in an unfamiliar city is an easy fix for an adventure-junkie like myself. Good thing my friend has a good sense of humor! Like everything else they do, I'm sure we'll see updates and improvements to the mapping feature as we move ahead.

The real cost behind your new iPhone is not that bad

Don't expect your new iPhone 5 to be compatible with all your existing equipment, however.  It comes with a new Lightning connector/charger, which doesn't fit anywhere on any iDevice from eons past.

Apple's not the only one to benefit from this advancement, either. Companies such as iHome and Belkin will see major sales increases as consumers rush to connect their iPhone 5 to the rest of their lives. 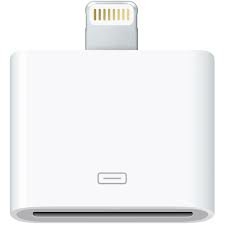 But all is not lost.  With the new iPhone 5, you get (drumroll) EarPods.

The future is here, folks.  The redesigned earbuds, with their very 'pod' shape, are purported to thump more bass and provide the cleanest sound of any headphones in their size category, and for the rare times you're not dancing to your favorite hits, they come with their own carrying case.  Maybe these headphones will actually last longer than the old ones, too.  Some things are made to last.

The new iPhone will be available for pre-order in the United States Friday, September 14 for suggested retail prices of $199 for the 16GB model, $299 for the 32GB model, and $399 for the 64GM model.  Apple also lowered its pricing on the 4S to $99, and the iPhone 4 is now free through its website, with new plan activations.  You can buy it in stores and online Friday, September 21.