Why Your Child Needs the Rainbow Loom Storage Box

The Rainbow Loom has been one of the hottest crafting toys around. This summer, my daughter and I went on a big hunt to find one, as they sold out immediately as soon as they hit the store shelves. After searching everywhere, we found one and my daughter has not stopped making bracelets, keychains and necklaces!

Originally, my daughter kept her loom, the rubber bands and other accessories in a large rectangular Ziploc container that I already had on hand. It worked and was my frugal solution to the storage problem. She could take this to her friends' houses or in the car, as it was portable.

But of course, her friends all had the official storage box. For the life of me, I did not see what the big deal was with this special container. My solution worked, so why did she need the case. Was it just because her friends had it? (Of course it was!)

Even though my storage solution was viable, there were still problems. It seemed that everywhere she opened her container, rubber bands would spill out. Or she would spend time sorting them into the colors she wanted to use for her next project. While the plastic container worked, it was not the best solution. Plus, my vacuum did not appreciate those tiny rubber bands being sucked up and I got tired of asking my daughter to pick them up.

There had to be a better way!

The Kit That Started It All!

I went to the craft store to see what storage containers they carried. The sales clerks were honest-they had all kinds of storage containers, but none of them would fit the loom. They were great for clips, charms and accessories, but the loom was too large. They told me that if my daughter wanted to store everything together, she needed the official Rainbow Loom storage case, which they did not carry. I thanked them for their honesty.

Since my daughter's birthday was fast approaching, I had her make a list of things that she wanted. Of course, everything from the loom kit and the accessories was on the list, including the storage case. I ordered it for her.

Let me tell you, that was some of the best money that I ever spent! Not only did she love the case, she went right to work organizing it. The box fits two looms and all of her accessories and it doe not spill over the way the Ziploc container did.

She had a ball putting all of the same colors together and it looks so neat and organized (something I love-I am a neat freak). There are far fewer rubber bands being left around my home, which also pleases me.

If you are planning on purchasing the Rainbow Loom as a gift, do the child and the parents a favor and add on the storage box. Take it from this mom, you will be glad you did!

A Place for Charms as Well 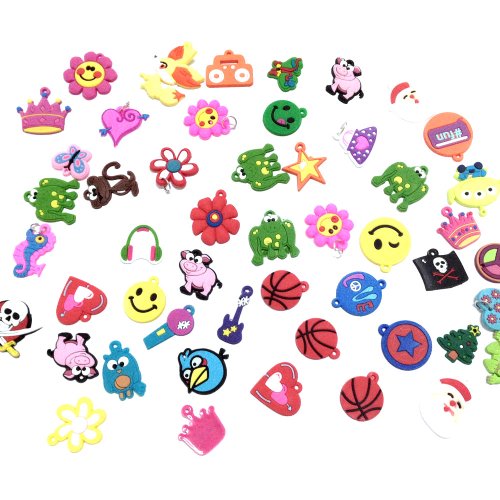 Charms for Rubberband Bracelets 30pcs Amazon Price: $14.99 $0.01 Buy Now(price as of Jul 29, 2015)
One way to make rubber band bracelets more colorful is to add charms like these. They will also fit into the storage unit.
Next >> Takenoko Boardgame Review