I am a retired teacher of English as a second language. I teach on line via Skype, and write on-line articles which reflect my love of travel, language, literature, history and culture. I love writing for InfoBarrel. Why not join me by signing up here: http://www.infobarrel.com/signup.php
InfoBarrel is a writing platform for non-fiction, reference-based, informative content. Opinions expressed by InfoBarrel writers are their own.
InfoBarrel > Travel & Places > Places > United States

The Strange Case of Point Roberts, WA and Why It Is Separated from the Rest of the U.S.

Countries are separated by international borders. Often these follow geographical features, such as the Rio Grande, the river which separates Mexico and the United States, or the Pyrennees mountain range which marks the boundary between France and Spain. At other times, for various historical reasons, they are marked by lines arbitrarily drawn on maps. In Africa, for example, Libya, Egypt, Chad and Sudan are demarcated by straight lines drawn by European colonial powers when they summarily agreed to divide up the area among themselves[1].

The longest such straight-line international boundary is the 1,260 mile section of the border between the U.S. and Canada which runs along the 49th parallel from Lake of the Woods in the east to Boundary Bay on the west coast. Beginning from the east coast, the border generally follows natural geographical features such as the Great Lakes until the 49th parallel demarcated border begins at the Lake of the Woods between Ontario in the North and Minnesota in the south. It then continues to the west coast and into the ocean, where it curves down around the southern tip of  Vancouver Island.

Although the line looks perfectly straight on a large scale map, it is actually more of a wiggly line which can deviate both northward and southward by as much as 295 feet. At the eastern and western ends of this long and almost straight line are two even more obvious anomalies.

The eastern end begins with the "Northwest Angle", a wedge of United States territory which juts north into Canada.  The reason for this is that it was wrongly assumed at the time the border was drawn that the northern end of the Lake of the Woods could be connected to the Mississippi River by a straight east-west line. At the western end, as the border runs westward into the ocean between the mainland and Vancouver Island, it runs across a small peninsula which projects south from Canada into the United States. This peninsula is Point Roberts, WA, an isolated section of American soil 22 miles south of Vancouver, B.C. [2]

Because of its unique  location, the only way for Point Roberts residents to reach the main part of Washington is by air or boat, or by driving north across the U.S. border into Canada, heading east, and then re-crossing the international border south into Washington. Since the town has no high school or hospital this 45 minute international drive is an integral part of daily life on the peninsula. However, with heightened border security and terrorism fears in a post 9-11 world, connections with the rest of the state have become much more problematic, as you will see in the video below.

This odd situation arose as a result of a lengthy dispute between Britain and the United States concerning the location of the US/Canada border which originated with the Louisiana Purchase in 1803.

In 1818 the two countries signed a convention which defined the border as running west from the Lake of the Woods along the 49th parallel to the Rocky Mountains. However, the land west of the Rockies from the 42nd to the 54th parallels was subject to competing claims from both Britain, and the U.S. and was for a while administered jointly by the two countries. After some political posturing and military threats by President James K. Polk and counter claims by Great Britain the two sides signed the Oregon Treaty in 1846.

Unfortunately, on its way to the coast, the extension of the previously agreed-upon line to the Pacific cut Point Roberts off from the rest of the U.S. This was because the end of the peninsula on which it stood extended just south of the 49th parallel. Under instructions from the British Foreign Office, British Boundary Commissioner James Prevost asked the American Boundary Commissioner to make Point Roberts part of Canada by moving the border line slightly south because of the difficulties this situation would create. Prevost was even authorized to offer suitable compensation, but to no avail. His pleas fell on deaf ears and Point Roberts remained part of the United States.

Credit: By Makaristos (Own work) [Public domain], via Wikimedia Commons

In 1949 the suggestion for Point Roberts to become part of Canada came up again, but nothing came of it, and the community remains an isolated American enclave which now obtains its water supply and back up firefighting assistance from Canada[3]. 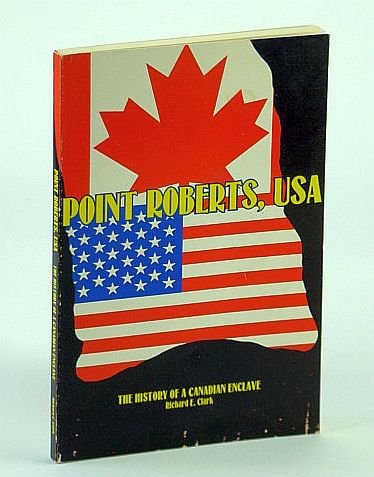 The economy of Point Roberts is heavily dependent on Canada. Canadian cross-border shoppers support the Point Roberts economy when they drive down to buy cheap American gas, dairy products and alcohol.  Vancouverites who live in one of North America's most expensive cities can buy reasonably-priced vacation homes on or near the ocean, and many keep boats at the marina. As a consequence, marine services and renovations to Canadian summer homes are important sources of revenue and employment.

Another thriving industry on the peninsula is parcel receiving. This is a service provided by businesses established to enable Canadian online shoppers to order from U.S. companies and avoid high international shipping charges by using a U.S. address. The buyers then simply drive down to pick up their orders in person and take them back across the border.

Because of its location, Point Roberts is uniquely sheltered by the international border. It has been marketed to Canadian real estate buyers as an "automatically ... gated community." It also has a reputation as a shelter for members of the Witness Security Program and as a haven for individuals escaping from estranged partners who have no respect for restraining orders.[4]

It would seem logical for the United States to take pity on these isolated Washington residents, and move the border slightly southward, especially considering, given the vagaries of the not-so-straight boundary line, that the present international border is actually slightly north of the 49th parallel. However, residents of this small town are patriotic Americans who seem to enjoy their isolation, and to take a perverse pride in their unusual situation.