Women and Beauty During the Renaissance Period

The concept of beauty has changed throughout the ages, and the Renaissance was no exception. Here, we delve into the origins of the Renaissance, what inspired the people during the Renaissance period, and how their inspirations and influences affected their vision of beauty.

The Renaissance, or ‘rebirth’ was a cultural movement that first had its roots in Florence, Italy, before spreading to the rest of Europe. This period of time lasted from the 1300s to the 1600s. It is believed that the Renaissance was born in Florence due to the influence of the Medici family, who were patrons of the arts. They encouraged the commissioning of art and encouraged others to follow suit as well. The rethinking of arts and culture lead to a significant influence and change in the way people saw humans, art, religion and science.

The way art was created significantly changed with the influence of revolutionary artists such as Leonardo da Vinci, Michelangelo and Filippo Brunelleschi. There was greater focus on realism of the human anatomy. Artists studied light and darkness in drawings and used the idea of naturalism, where artists attempted to portray nature in itself in a realistic manner. During this period, artists were commissioned by wealthy patrons to create works of art for them. These works of art could include portraits of the patron’s family, or fantasy works. Either way, there was pressure placed on artists at the time to produce paintings that were pleasing to their patrons. Thus, their paintings were influenced by the wishes of their patrons. From these paintings, we can then gather the perceptions of women and of female beauty during the Renaissance.

Interestingly enough, there seems to have been a polarization occurring for the depiction of women during the Renaissance. While some women were depicted in a strict, uptight manner, others were drawn fully nude in a suggestive manner. This is likely due to the first type of paintings being commissioned for women in the upper tiers of society. These portraits were meant for the patron family and represented the upper class.

The other type, on the other hand, representing a female ideal. The female body is typically in full display with long locks of hair. Interestingly, in the picture below, there is a sharp contrast between the nude female and the women in the background who are fully clothed. It is as if the artist is representing the ideal female in front, but in the back of the painting, is stating how women are in real life.

Although there are some aspects of female beauty that are similar to today, there are others that are quite different. From what can be gathered, the ideal female had more flesh and thicker arms and legs compared to today’s ideal. The imagined woman would be voluptuous and have a full figure.  Her bust would appear full with no signs of bones. The ideal female would also have pale skin, much unlike tanned look that is popular in our modern era. To accompany this desired skin was blond hair, which made women appear more youthful than dark locks.

In terms of facial features, women with delicate features were prized. This included having soft features such as thin eyebrows, large eyes, a high forehead, pink cheeks and curly hair. Also, the female would typically have a well-defined nose and a small mouth.

Cosmetics During the Renaissance Period

Like during any other age, with a female ideal came the pressure for women to fit this ideal image. Since having a high forehead was considered beautiful, women whose foreheads were not high would resort to plucking their hairline to give the appearance of a higher forehead. Women also plucked their eyebrows and used lead pencils to darken their eyebrows.

Like in any other period in time, smooth skin was highly valued because it represented youthfulness and health. Women would use cold creams to moisturize their skin. These creams were scented oils made from olives. Unfortunately, there were also some harmful forms of skin moisturizers that contained mercury and sulfur, which were meant to be applied to the face.

For cosmetics, women would whiten their skin as much as they could. Besides staying out of the sun, women would also use make up to whiten their skin. This makeup would include a white lead carbonate (which is dangerous for humans to use) as the base. The lead carbonate would then be mixed with oils and other substances to create the desired colors. Typically, white powders such as ground alabaster were spread on the face to give the appearance of fair skin. Rouge existed in red and pink colors for women to apply to their lips and cheeks to give a “glowing” look. Women during this time also used their Renaissance version of eyeliner and mascara. Kohl, a dark mineral based powder, was a popular substance for eyeliner. Also, women oiled their eyelashes in order to create the illusion of darker, thicker eyelashes.

Strawberry blond hair was considered the ideal hair color during this period of time. Women thus resorted to coloring their hair through bleaching methods. They used a variety of ingredients from saffron to sulfur and turmeric to give their hair the desired look. Firstly, they would apply a product with lye in it to rid their hair of its natural color before applying the dye. They would then spend long periods of time under the sun to bleach their hair. To avoid tanning their skin or getting freckles, women would wear layers of clothing and wear wide-brimmed hats with the top cut out to expose only the hair to the sun, which were known as the Venetian Hats.

Italian women also practiced putting drops of belladonna, an herb, into their eyes. This would create the desired effect of making their eyes sparkle and make their eyes look wider. Unfortunately, it also led to poisoning and permanently harmed their vision with extended use.

Celebration of a God-Given Look

Although there were many cosmetics in use by women during the Renaissance period, there was also the wide celebration of the natural female figure during this time. The female figure was “from God” and thus, was appreciated in itself. Unfortunately, there has always been an ideal form of beauty that women are expected to pertain to throughout human history, and the Renaissance is no exception to this. 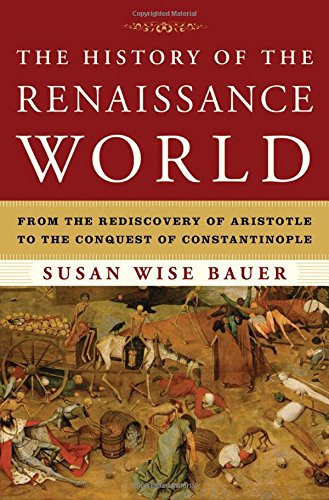 The History of the Renaissance World: From the Rediscovery of Aristotle to the Conquest of Constantinople Amazon Price: $35.00 $21.08 Buy Now(price as of Dec 18, 2015)
Next >> Black Shuck - the Devil Dog of Eastern England