Zuke 'Em Is A Very Funny Book On Chess

A game of chess consists of three phases: opening, middle game and the endgame. Great masters of the past all said you start studying the endgame. And I guess they were right. Alas we chess addicts are all obsessed with the opening. Lots of books are devoted to opening play. And they all look the same.  Don’t misunderstand, for the amateur there are really good ones. They not only explain the first moves but also how to proceed in the middle game. Most opening books are written by professionals. Some amateurs also have written opening books but they are most of the time substandard. But sometimes an amateur has got it right. In this case it’s David Rudel with his book Zuke ‘Em. It’s a very funny and well written openings book. The book is devoted to the Colle-Zukertort opening. The opening is the kid brother of the Colle opening. The Colle starts with 1.d4 d5 2. Nf3 e6 3. e3 Nf6 4. Bd3 c5 5. c3. Instead of 5. c3 in the Colle, in the Colle-Zukertort the move 5.b3 is played.

The Colle is named after the Belgian master Eduard Colle (1879-1932) who introduced this opening system for white in the 1920s. It’s also known as the Colle-Koltanowski system because of the work of the American master George Koltanowski (1903-2000). The Colle-Zukertort is named after the German master Johannes Zukertort (1842-1888) who was the first to play this system with 5.b3. Johannes Hermann Zukertort was a leading chess master in the world in the 1870s and 1880s. He lost to Wilhelm Steinitz in the first official World Chess Championship 1886. He was a great tactician. After Johannes Zukertort the opening was further popularized by Akiba Rubinstein (1882-1961). Akiba Rubinstein was arguably the strongest player not the win the World Championship. Because of his contribution the Colle-Zukertort is sometimes also called the Rubinstein Attack. The last grandmaster to play this system is Artur Yusupov (born in 1960).

So why is Zuke ‘Em such a great book? The cover of the book says it all really (see picture). The title Zuke ‘Em already is quite different from what we are used too. Most of the time opening books are called “Win with the Colle’ or ‘The Colle explained’. Zuke ‘Em has a ‘Arnold Schwarzenegger feel ‘about it. And what about the subtitle ‘The Colle-Zukertort Revolutionized’?  David Rudel presents his work like he’s having a conversation with us. And he really loves this opening and he wants us to love it. David Rudel is like the knights of King Arthur on a quest for the truth. The writer explains all the themes in this opening. Like in all chess openings it is not a one-sided affair. Some lines which score very well for black aren’t covered very well in other books. And there are off course the annoying lines. Well for both there are some great ideas. In the meantime David Rudel has written two more books ‘The moment of Zuke’ and ‘Bxh7’. When looking at the cover I guess more of the same. Love to get a look inside. 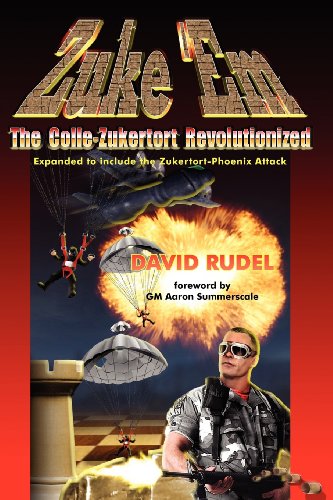 Zuke 'em - The Colle-Zukertort Revolutionized: A Chess Opening for Everyone. Amazon Price: $62.82 Buy Now(price as of Jul 1, 2016)
Next >> Origins of 7 Sports Traditions