Leopard Geckos & Why They're Awesome Pets

This lizard is also referred to as Eublepharis Macularius and found in the deserts of Asia, Pakistan, India and some parts of Iran. This is one of the only lizards that have eyelids that move and this is something that makes this gecko stand out from the rest (other than it's natural spots).

During the warm months, they are able to absorb heat while they're sleeping and when it's cooler they're able to keep their body temperatures up and more comfortable. This is why light bulbs must be purchased when you're ready to take one of these guys home. They love heat and if you live in an area that gets really cold during the winter months, this is going to keep them happy.

In their natural habitat, the temperatures drop quite a bit (as low as 50 degrees fahrenheit) and this makes the lizard go underground and go into what's called brumation. This is similar to hibernation except they don't stay asleep all winter; they just remain underground and they survive by living off of their body fat.

This breed of gecko doesn't live with other animals and has a dull and dry appearance when wild. They are bright and have different patterns when they're kept as pets.

Don't freak out when you see your lizard eating it's shed skin. Like most reptiles, yes, it sheds, but this one also eats it's shed skin. It's said they eat it because in the wild they don't want any predators to smell it's scent and it's also believed to give the gecko it's proteins and vital nutrients for survival.

Leopard geckos are scary looking, but they're actually great family pets because they are really low maintenance and inexpensive when compared to other pets. They can go long periods of time without eating which is great if someone forgets to feed it. They're also quiet and they don't require a lot of space.

One reason people choose this gecko as a pet is because it doesn't move very fast. If you like to let your pet lizard out every once in a while to explore, it's not often you'll see one of these running away like most geckos.

Where Can You Get One?

This particular reptile is easy to find and most local pet stores have them throughout the year. You're not going to have to worry about going from store to store just to find one. The reason being is that most of the leopard geckos in stores are bred in captivity and aren't caught from the wild.

Even if one store doesn't have any in at the moment, check back in a few weeks or even a month and you're likely to see them displayed on the store shelves in their habitat. You always have the option of visiting another store in your area and they'll probably have them in case you're not in the mood to wait.

Baby leopard geckos are generally between $50 and $70 dollars depending on the breeder that provided the store with this pet as well as the area you live in. Adults can be as much as $100.

Other than their shed skin, they love crickets, mealworms, waxworms and pinkies. Each food choice offers different benefits to your pet and I would recommend alternating the foods to give a more balanced diet. 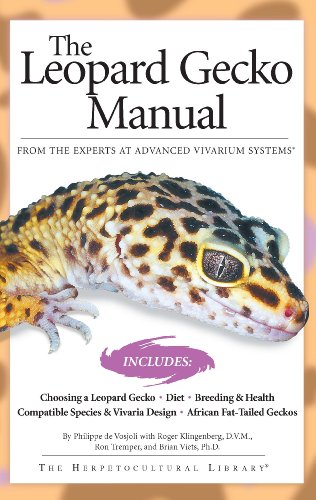