Tales of Xillia Review - Yep, That is a Tales Game

Pretty anime characters, a world in peril, a rag-tag group on a mission to save the world? Yep, this is a 'Tale of' game. Tales of Xillia is the thirteenth game in the expansive Tales series and veterans of the series will find much of the familiar. For those that have been turned off by previous Tales game this is definitely not the redeemer, but it isn't exactly the worst game either. Tales of Xillia is just that, a game that runs the middle ground in a long standing series. Likeable to newcomers to the series as well as veterans, but for those that have never found the allure of the series, Tales of Xillia won't draw you in again.

Tales of Xillia is set in the world of Rise Maxia, a world where monster, spirits, and humans share a symbiotic existence with each other. Within this world are two conflicting nations. The country of Ajule, a country that combines control of monsters and military strength, and La Shugal, a country that derives its strength through the use of spirit powers. The peace between these two powers is tested by the invention of a new super weapon, the Lance of Kresnik. Said to be the most powerful weapon in the world. Jude Mathis, a medical student at the capital of La Shugal, becomes disconcerted when a large number of patients are admitted to the hospital following an accident, and his mentor, Dr. House, goes missing. Meanwhile, Milla Maxwell, the incarnation of Maxwell the Lord of all Spirits, senses a great number of spirits' deaths, and decides to investigate the source of the disturbance. The two protagonists meet while attempting to break into the complex where the incident occurred, and it is there that they discover a horrifying secret.

This is where Tales of Xillia parts from the previous games in the series, they allow players to experience the story through two different perspectives. You can choose to play as the doctor Jude or the spirit Milla. The overall story is the same no matter who you choose, but you are afforded different cutscences, side quests, and dialogue with the choice of characters. Ultimately,  it is a thinly veiled device to add replayability. However, it is a unique addition to the series. The two main characters couldn't be more different. Milla is stiff and awkward and Jude is unsure an shy, with that it does make one actually want to replay through the story to see the changes.

In the Tales series, one of the more likeably addicting parts of the game was the extensive cast of diverse characters. In this respect, Xillia is no different. Your core party is comprised of six different characters, each with a unique fighting style and personality. With each the characters comes their own unique story arcs that help the player understand them better and form connections.

Thankfully, Tales of Xillia holds true to the beautiful visual art that the series has become known for. Towns, albeit small, are visual masterpieces as is the world itself. The luscious anime cutscenes are a thrill, but are too few and far in between. Most of the cutscenes are done in-engine, which makes for quick load times but are not as visually stunning as they clearly could have been.

As for combat, artes make their return. Artes are essentially skills that characters learn as they level. By the end of the game, characters have a slew of unique skills making each character effective in a variety of comabt situations. Combat itself is fast-pace and filled to the brim with special effects set to visually excite. However, Xillia does add something new to what is essentially traditional tales combat. It links two players together, in which they can unleash devastating tagteam attacks. The combinations are finite, what with only having six different characters, but discovering each of the linked attacks is a thrill.

Tales of Xillia really differs from previous games with the addition of the Lilium Orb system. Unlike previous games where leveling up was a simple affair—you got experience, you got stronger—the Lilium Orb system allows more customization. Much like Final Fantasy X's sphere grid, you can allocate your points you get as you level into different areas along a massive gird. This give a level of customization to each character that has never been seen in the series before. However, if that overwhelms you, you can set it to auto-level as well.

With the good of the Lilium Orb system comes the bad of the new equipment system. In most JRPGs you can walk into a town and buy the available gear upgrades no problem. However, now you have to trade gear or gold found in battle to unlock the gear. Sure, this is a good system for grinders who want the top of the line gear, however for other players that just want to get through the story it is a huge nuisance. Though it does add yet another level to customization that was not previously available in the series.

Finally, Tales of Xillia implemented a quick travel system, in lieu of a world map, to aid people in doing side quests. However, the story advances very linearly, so if you just want to do the story, you will not find much use for the quick travel map. However, for those obsessed with doing everything the world has to offer, it is a huge help and a time saver. 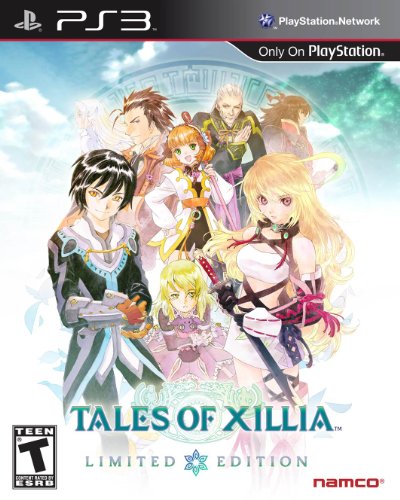 Tales of XilliaAmazon Price: $59.99 $58.48 Buy Now(price as of Aug 6, 2013)
Overall, Tales of Xillia is by no means the best in the Tale of Series. It combines the familiar with the pleasantly new. The series is a staple of the JRPG genre, and that genre has constantly been trying to reinvent itself to try and find its place among the current generation games. This leads to a lot of god awful changes in classic JRPG series, it is nice to see that Xillia was willing to try to implement new things while still keeping the familiar, the good.

The game feels a little dated to be an end game of a generation of consoles, but gamers should keep in mind that it is two years old already. Released in Japan two years ago, it took awhile for it to come to the rest of the world. So the lack in flair is understandable in that way. For those who have been lifelong fans of Tales games, this is definitely something that won't disappoint. Really, it is a good play for anyone that loves the stories and the characters of the JRPG genre.