In just about every true zombie movie in recent memory the plot lines are all just about the same. It focuses on a group of survivors trying to fend off the mindlessly hungry hordes of undead while hiding out in some defensible—usually rural—structure. World War Z takes on the mighty load of showing the zombie apocalypse on a global scale. No small feat, but one they pulled off masterfully.

World War Z is based off the book of the same name by Max Brooks, however the movie story you will not find in the book, something I think ultimately disappointed fans. Creating a movie based on the entire book would have been chaotic at best, and picking just one story would have left room for all those pressing “why pick that one?” debates. However, though book is fictional, for all the stories recorded there would have been millions more left out, this is where the movie comes in. This is one of those epic stories that were left untold, or at least that is what I think they were going for.

The story of the movie World war Z follows that of Gerry Lane, previously a United Nations Investigator, though now retired. He is living happily with his family in Philadelphia. However, those brief few happy minutes you see at the beginning are about the only ones you will get. While stuck in traffic, the initial moments of infection create absolute panic within seconds. After the action starts in World War Z, it has a really hard time stopping. The zombies, most if not all a product of clever CGI, wash over the screen when they show up en masse like a tidal wave of writhing squirming death. Whether it be flooding the streets of Philly or breaking against the walls of Jerusalem, the zombie hordes are all just very…fluid looking. Thankfully, this infection isn’t some sissy ‘get bit and spend a feverish day sobbing with your family’ kind, it takes 12 seconds from biting to turning, in which you spasm like you were just given a high electroshock voltage. 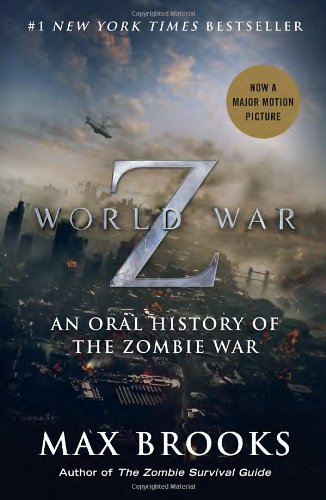 Here is where World War Z changes from the traditional zombie survival movie. Usually, the man would try to get his family in a safe house and survive with others, however his friend at the Unite Nations airlifts him and his family to their safe boat base in the middle of the ocean. From there on, he ditches his family (reluctantly of course) in lieu of jet-setting around the world searching for a cure or weapon against infection. This leads him to South Korea, Israel, and ultimately a World Health Organization medical facility in Wales.

Each area Gerry Lane visits would represent a different story of the briefly shown people there, something I enjoyed as the book was of course made up of many different stories by many different people. Overall the story was interesting enough, but I believe movie goers will be more drawn in by the sheer intensity of everything. When there is action, in which the movie has no shortage of, it gets you so involved with how fast-paced and panic-inducing this whole situation likely would be. Even when the action calms down, which it does in the second half of the movie, there is so much tension created that it feels like your muscles will never relax. Every second is the most agonizing moment in the best possible way.

Perhaps the best tool this movie utilized for creating unbelievable tension when there was no action is making the undead hypersensitive to sound. Making the broken glass beneath their feet crackle so loudly you think someone just broke a window. Making the sound of a soda can rolling haphazardly along the ground like a never ending lingering bell toll. The intensity of every little sound near the end is something I hope to see used in future zombie movies, it was absolutely thrilling. I was concerned when I saw the movie has a PG-13 rating, not something you want to see on any zombie flick. However, they made a decent movie for such a child friendly rating. There wasn’t any gore, but you got the gist of what was going on.

A person got bit, you knew they got bit. I mean, who needs showing blood splatter when furious zombies break their head against windshields anyway? Who needs realism when you can fill seats with rage filled high schoolers? The low rating was probably my biggest gripe with this movie. At one point I realized that the blood you could see was black. They did at one point say that one of the patient zeros was oozing what looked like tar, so that was a easy way to cover themselves. However, in my experience, having black blood instead of red is a quick way to get a kid friendly rating. Knowing that they went to such lengths just irritates me. 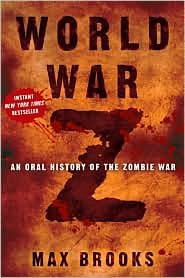 Of course, a movie would be nothing without the people who made it. I can honestly say I have not liked any of director Marc Forsters previous movies which include Quantum of Solace, Monster’s Ball, and Finding Neverland. However, for what he did with the intensity of this movie I look forward to what else he may have up his sleeve in future films. As for Brad Pitt, I have come to like him more and more as he ages. He does play the role of the father who is just working to get back to his family, which is just done absolutely to death in movies these day, but out in the field his character changes. He breathes believable life into Gerry Lane making his seem charming and compassionate but also so brutally tough.

Pitt and his portrayal of his character are interesting and all, but far more interesting is the side characters. For example, the wife played by Mireille Enos. It is a character I wish would have had a bigger role. Sure, movie goers cringed at her actions a few times in the movie, but in the beginning she was calm and almost cool. She wasn’t sobbing uncontrollably as is the traditional mother role in zombie films. However, she was almost raped, but still had the bravery enough to guard the families rear by holding the road flare. I have always believed the rear guard in a zombie situation to be the most terrifying.

Then there was the group of soldier in South Korea, a group of badasses if there ever was. They survived the complete meltdown of a military base with just their weapons, their military training and team work. I would have loved to see how their story ended.

In conclusion, regardless of how you feel about the movie deciding not to use ay actual stories from the book it is based on or the gratuitous use of CGI, World War Z is still quite the quality film. It is thrilling right to the very end and well worth the watch if only for the nail biting action scenes in which the CGI tidal waves of zombies are flooding humanity with a pestilence. This movie is also available in 3D, those of you who watched in in 2D will easily be able to spot the 3D moments though. There are lots of places where the action appears to pop out, even without pesky 3D glasses.