As well as being an avid writer, I am also an enthusiastic gamer, anime fan, movie buff, and love of all things strange. Being as I live with a boyfriend, I am also particularly knowledgeable about cleaning and cooking. You can join me in my adventure of writing for money here at Infobarrel. Sign Up today! Also, I wrote a book! Check out The Guild today!
InfoBarrel is a writing platform for non-fiction, reference-based, informative content. Opinions expressed by InfoBarrel writers are their own.
InfoBarrel > History > Ancient History

If you have ever committed a crime, whether it was stealing a candy bar to something much more serious, be thankful that you only get to sit in perpetual time out for it. In ancient times, when they wanted to cut down on crime, there was a lot more blood. Whether they wanted the criminal element to spill their guts (literal or otherwise) or they just wanted to get rid of them for whatever their supposed crime was, they had some pretty bizarre ways of doing it. Most people can’t wrap their heads around a slow and infinitely painful death, but that was the name of the game when it came to these horrific torture devices from history.

Be sure to look at these devices carefully and consider what kind of person would ever dream them up. Some of them are truly bizarre when compared to all the other ways there was to execute a criminal in ancient times.

This terrifying contraption comes out of ancient Greece. It was commissioned by a king and built by brass craftsmen Perillos of Athens. Perillos was instructed to create a new way of executing criminals for the King’s amusement. So he created a giant hollow brass barrel shaped like a bull. The criminal was placed inside and a fire was lit under the device, effectively cooking them alive. What’s more was that Perillos put in a number of tubes and stops so that the screams sounded like a bull’s grunts.

While the king enjoyed his creation, unfortunately for Perillos, he was also the first person to test it.

This torture device actually didn’t take that much creativity to create, but perhaps it was made out of necessity. The breaking wheel is just a wagon wheel sans the wagon. A criminal was tied onto the wheel and the punisher would proceed to break their limbs with a hammer. If they didn’t die during the beating, they would be left tied to the wheel until they died so that the carrion birds could feast on their flesh.

This torture device is likely one of the most bizarre of all. The torture itself is a pyramid-shaped seat. The victim is stripped naked and the tip of the pyramid is inserted in a particular orifice. They are then slowly impaled through the orifice by their own weight, and then they added weight later. Through a series of ripping, tearing, and painful impaling, the victim will eventually die.

I mean, who thinks up this stuff? What sort of experience gives you this idea in your head? That’s the real question here.

The heretic’s fork was a popular torture device during the Spanish Inquisition, and an ironic one at that. This dual-sided fork had one side inserted under your jaw and the other side inserted in your chest so that you couldn’t move your neck or talk at all. The irony comes from the fact that during the Spanish Inquisition, they were trying to get people to confess their crimes. How could they do that if they couldn’t talk?

While not fatal unless someone is careless and hits an artery, it was a good tool to spread disease and infection.

This isn’t so much of a torture as it is a slow and painful death sentence. Typically reserved for the serious crimes like witchcraft, adultery, blasphemy, and murder, during the saw torture the accused was hung upside down. This forced all the blood to their top half so that they would not bleed out as quickly. The victims were then slowly cut in half with a saw starting from their groin and going beyond. Some were cut completely in half, others were just cut to their abdomen to prolong the pain.

The pear of anguish was named after its pear-like shape that was created by a series of spoon-like pieces of metal that can expand and contract with the turn of a screw. This torture device had two uses during its time. One use was to be inserted into a victim’s mouth and expanded so that they would shut up for awhile, and the second use was to insert it into a lower orifice.

Unfortunately, when it expanded while inside you, it had the nasty habit of ripping flesh and then sort of hooking right in there. So even when it was closed and removed, it was likely to take a bit of you with it.

Rat torture is pretty basic and made more well-known by Game of Thrones. Essentially, you put a rat on a person’s stomach, then place a metal pail over the rat and begin to heat it with fire. Not only are you likely to get a little burned, but as the interior heats up, the rat will try to chew its way out. Human flesh is pretty easy for a rat to chew through.

Think having water flicked at you is super annoying? Well imagine it is hot molten lead. That’s what this torture device does. Fun fact, they were designed after holy water sprinklers used by the church, because reasons, I guess. This device was also used in the execution method of pouring silver in one’s eyes.

Like Judas cradle, the Spanish donkey is bigger, but no less as pointy. Instead of any sharp points being inserted in your orifices, this torture device demands the victim be stripped naked and straddle it at its point. Needless to say, this get pretty uncomfortable in your genital area, but it becomes downright unbearable when the torturers start adding weights to your feet so that the Spanish donkey will, after enough time, begin to split you in half.

This is a form of torturous execution reserved to the most terrible of criminals – traitors. Those convicted of treason were often sentenced to be hanged, drawn, and quartered. If it seems a bit overkill, it is.

This method starts off with a hanging. The victim is hung until almost dead and then cut down. Afterwards they have their genitals cut off and entrails remove and burned in front of them. Afterwards, they had their limbs cut off and were beheaded. This was the fate of thousands of people including William Wallace and Guy Fawkes. 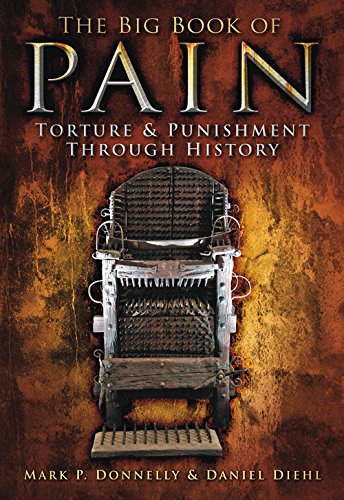