For as long as there has been entertainment, there have been those that want it for free. From copying VHS tapes to stealing your neighbor's cable, the dark allure has always been there, but now it has never been more prevalent than in the realm of video games. In this ever-increasing digital age, it has become easy to give into the dark side. However, unlike other domains of the entertainment industry, video game developers have taken it upon themselves to stop the illegal downloads of their games, not just with always-online DRM, but by breaking their own games for those with unauthorized copies.

Using some of the ingenuity and creativity that their developers put into the games that they make, here are some games that put in the most unique and clever punishments for video game pirates ever designed.

In 2014 when The Sims 4 released, true to the long tradition of pirating the endless expansion packs of the previous games in The Sims series, people eagerly snatched up less than reputable copies. However, as soon as they ordered their sims to take a shower, the pixilated blur that covers their bare bits remained after they got dressed again.

However, the blur didn't just remain, it actually got bigger until it dominated the entire screen, making the game unplayable. These salty seadogs took to the internet to complain of what they thought was EA's massively overlooked glitch. Unfortunately, by bringing it up on Reddit and other sites, they were unintentionally admitting to their crime.

Remedy Entertainment's Quantum Break the most recent game to adopt a game-changing addition for those without a proper copy of the game. However, this developer is a little more laid-back with their policy.

If you are using an unofficial copy of Quantum Break (or simply sign out of your Microsoft Account before play), the game will load up with protagonist Jack Joyce sporting a new look - an eye patch worthy of sailing the seven seas.

This new adornment has no ill effects, but you will know what you did.

Of course, this isn't the first time Remedy did this to those with unofficial copies of their games. It also happened in their previous game, Alan Wake.

Unlike Remedy's laid-back joke with their games, Croteam, the developers of Serious Sam, were a little more brutal with their anti-piracy approach. If you got an unofficial copy of Serious Sam 3, the game worked fine except for one little thing - the giant pink scorpion that chased you everywhere.

Invincible and garish, the scorpion will relentlessly chase Sam down throughout the game. It might just be a must for those who want Serious Sam 3 to be brutally difficult.

After Serious Sam 3, Croteam got even more devious towards those that didn't want to pay for their games. In their 2014 gem, The Talos Principle, Croteam developer laid their trap in wait until several hours into the game.

For those who did not cough up the cash, one of the elevators will simply stop mid-travel, effectively locking pirates inside forever. They cannot proceed. They cannot exit. They can only cry (and buy the game).

While not the first game to deploy anti-piracy measures, Earthbound on the SNES was certainly only of the more memorable early examples. Upon booting up a cracked copy, Earthbound would give you a stern warning message about piracy, but that deterred no one. However, for everyone that did not heed its words, they were faced with a much more difficult game.

The DRM exponentially increased enemies in the game, but that was just part of the fun. For those that managed to reach the end of the game despite the odds, they had one more surprise waiting at the final boss battle.

During the final battle with Gigyas, the game freezes completely. No, it wasn't the SNES or emulator acting up. The game goes even further by completely erasing all previous saves.

They did warn you.

In EA's 2008 game Mirror's Edge, player take on the role of Faith, a runner who navigates the futuristic utopia by sliding, jumping, and, of course, running all over the cityscape. Faith needs speed and momentum to dominate the game and tackle all those challenging rooftop jumps, but for those that did not pay EA their due, they'll find speed is the one thing that Faith lacks.

In unofficial copies of Mirror's Edge, Faith walks slower than your Grandmother without her walker when she approaches jump walks. This makes the jumps essentially impossible and the game utterly unplayable.

The developers of H1Z1 didn't put any anti-piracy measures in their game, but it did attract a ton of hackers. 25,000 hackers, in fact. Or at least that was the number that the developers banned from the game in one massive sweep.

However, the Daybreak Game Company is one that believes in second chances. They stated that if the banned hackers put up an apology video on YouTube, they would lift their ban. However, the video had to be sincere and moving. After the thousands of responses they got, Daybreak only unbanned three people, one of which almost got re-banned for making his YouTube video private afterwards.

For the scurvy-riddled rogues that managed to get their hands on a copy of Ubisoft's Far Cry 4, they found that their copy was missing a crucial feature. Ubisoft wasn't messing around when they removed the Field of View Scaling from unofficial copies of the game. Without FOV, doing something as simple as riding an elephant towards your enemies becomes something out of a drug-fueled nightmare.

The Witcher 2: Assassin of Kings

CD Projekt Red has always produced some truly amazing RPGs. However, while they take fan feedback to heart, their care for fans draws the line at piracy.

For those who tried to get a cracked copy of The Witcher 2: Assassin of Kings, they were in for a nasty surprise. Romance is one of the many fun aspects of The Witcher series, but when players are about to close the deal with any number of The Witcher's many beautiful ladies, they suddenly find themselves crawling into bed with an ugly, old crone. It's not exactly game-breaking, but it does take a bit of wind out of your sails.

The internet has spent countless hours posting up videos of reaction shots and trying to unravel the creepy mystery that is Five Nights at Freddy's. However, there is one treat that is only available to swashbucklers that refused to put down their hard earned cash on this game. After playing the game and clicking the exit button, Freddy will pop out and scare the crap out of you. This will happen each time you try to quit.

It is not the biggest deterrent, but it's caught a number of guilty persons off guard. 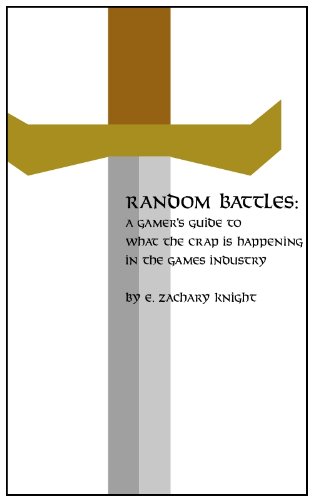 Random Battles: A Gamer's Guide to What the Crap is Happening in the Games Industry Amazon Price: Buy Now(price as of Apr 11, 2016)
Next >> No Man's Sky - How to Efficiently Farm Money