Although The Walking Dead is, as it stands now, still airing its 5th season, we dedicated television watchers know that all things must end (at least until around the same month next year). The gap in between seasons is a long time to go in between what is the favorite television show of many. So to fill the void, here are eight shows like AMC's The Walking Dead, although not all of them follow the zombie apocalypse trope that is over saturating every facet of media.

Z Nation is one of SyFy's answers to The Walking Dead. It takes places three years after the zombie apocalypse gutted the United States (and the rest of the world), follows a team of average run-of-the-mill survivors as they transport the only person to receive a zombie vaccine and not die from being infected from New York to a viral lab in California. Essentially, Z Nation is The Walking Dead if it didn't take itself so seriously. It's filled with Zunamis (Zombie Tsunami), Zombienados (Zombie Tornadoes) and DJ Qualls, who most people haven't seen play a major part since he starred in The New Guy. It's funny, occasionally sad and filled with creative zombie carnage. To put this comparison into video game terms, The Walking Dead would be like the Last of Us while Z Nation is more like Dead Rising, which may or may not tell you everything you need to know.

Although the newest zombie television shows to the scene, iZombie has already shown potential. iZombie, according to show creator, is more Warm Bodies than Walking Dead. With all the zombie media out today, viewers certainly can afford to pick and choose, but this is one show visitors shouldn't pass up. The biggest seller is iZombie takes place from the zombie's perspective that is sentient (and snarky), but with a controlled lust for brains. The main character, Liv, uses her newfound zombism and the fact that eating brains gives her flashes of the memories from the deceased to help solve murders and unravel the mysterious recreational drug that caused the mini-zombie outbreak that infected her. While it is more like Law and Order, CSI or Bones, the only thing it really has in common with The Walking Dead is that it both has zombies and they both started as comics. For some people that may be enough.

Relatively unknown to audiences in the United States, zombies fans from the UK are sure to remember this E4 miniseries. The story is a typical zombie outbreak story, but what makes it so interesting is the setting. This story of the zombie apocalypse follows the staff and residents on the Big Brother reality show. The Big Brother contestants are, for most of the series, oblivious to the death and chaos outside while the staff struggle to survive in a building that was surrounded by the fans-now-zombies that showed up for the live eviction night event. True to the style of many British series, it's short and brutal but tells an interesting story. It's heart-breaking with just the right dash of humor, making it the closest zombie-related show to TWD to date in terms of ambiance.

Survivors is another British series, and while it features an apocalypse, it did not come at the hands of zombies. Survivors tell the tale of a group of people who find each other after 90% of the human race has fallen to a flu-like pandemic. This group of immune must now struggle to survive among the other hostile survivors and a mysterious corporation that is chasing them for mysterious reasons. For Walking Dead viewers that like the whole "fear the living, not the dead" dynamic of the show as well as the Governor arc, Survivors is a show that will fill the void just fine.

The Walking Dead is to zombies as Falling Skies is to aliens. This series tells the story of the aftermath of a global invasion by several different species of aliens and their deadly machinery. Within days of the first strike the aliens neutralize the technology and power grid of the world, destroying militaries all over the world and 90% of the human population in the process. After six months, a group of survivors led by retired U.S. Army Captain Dan Weaver to fight back against the invaders. Although they are drastically at a disadvantage the story is touching, heart-breaking and filled with delicious mystery as to why they came and what they want with humanity's children.

With no zombies or aliens, Revolution seems like your same boring old apocalypse. However, with a plot full of twists and creative technological ideas, Revolution manages to weave itself into one of the best post-apocalyptic tales around. The story focuses on a group of family and friends after the power grid of the world is shut down suddenly one night. Fifteen years later, a group of revolutionaries seek to rescue their captured family members and, along the way, unravel the mystery to as why the lights when out. The result is a story that is surprisingly interesting and filled with unique apocalypse ideas. Revolution is more of a must for those who liked the show Jericho, but Walking Dead fans that appreciate a deep story, an apocalypse setting, and some seriously intriguing plot twists will find something to love in Revolution. Unfortunately, much like the show Jericho, Revolution was canceled, but its two seasons wrap things up enough to leave most satisfied.

Helix is SyFy's other answer to AMC's hit show. While on the outside, Helix seems like an average man-made zombie outbreak in its humble beginning on an Arctic research station, the story spirals into something much more complex when it comes to the true intentions of the virus. Although many were disappointed that Helix focused less and less on these zombies (as they can be cured), it does present a distinctly different and interesting story after the plot twists of season one.  While TWD doesn't usually have its intrigues play out in the shadows or very deeply at all, fans of the show can enjoy how it touches on some of the elements of a zombie apocalypse such as isolation, fear, and the stresses of being in constant danger.

Okay, so the spin-off - officially named "Fear The Walking Dead" by comic author Robert Kirkman - isn't out yet, but it's been ordered and it is on its way. As the rumors stand right now, it will start as a prequel to the mother show, but slowly move up the timeline and catch up. The spin-off will take place somewhere in California, meaning these characters will likely never meet Rick's group across the country, but will have a zombie adventure all its own. It will be quite the adventure to see the new story they present and a refreshing change for  comic book fans like myself who always nitpick deviations from the source material. 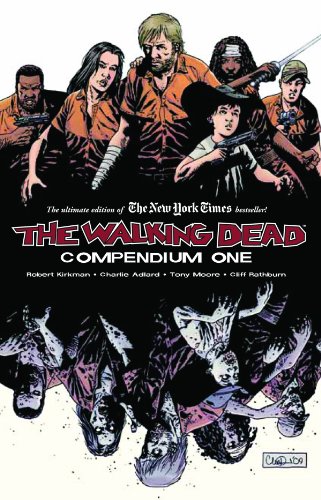 The Walking Dead: Compendium One Amazon Price: $59.99 $31.95 Buy Now(price as of May 30, 2016)
There's never been a better time to start (or catch up) on the comic. It's still the same characters you have fallen in love with, but the story differs at several key points. Plus you can punish your non-comic reading friends with spoilers for upcoming events.
Next >> Lifetime Cable Channel Releases Yet Another Tell-All About Marilyn Monroe