Get GM Mastery: Inns & Taverns Essentials from RPGNow or find more GM Mastery products. You too can earn money from writing articles by signing up for InfoBarrel.
InfoBarrel is a writing platform for non-fiction, reference-based, informative content. Opinions expressed by InfoBarrel writers are their own.
InfoBarrel > Entertainment > Games

GM Mastery: Inns & Taverns Essentials by John Simcoe and Johnn Four (the author of NPC Essentials and Holiday Essentials) is a mostly generic fantasy role playing game supplement and book three in the GM Mastery range, which is published by Roleplaying Tips. This supplement is primarily designed for the D20 System and, as such, some elements are covered by the Open Gaming License and are designated Open Gaming Content.[1] Inns and taverns are a common scene, if sometimes overused, in fantasy role playing games, and they often serve as meeting places. This supplement is intended to enable the creation of better locations of these types, including restaurants.The book is available from RPGNow as a zip download. The download contains two primary PDFs, the first of which cover Chapters 1 and 2 of the book, and the second covers Chapter 3. There is a third PDF that is purely the book covers. Another three PDFs are one inn and two tavern maps, which have been made using Skeletonkey Games' (whose founder did the cartography for Ptolus) e-Adventure Tiles; Adventure Town: Taverns Volume 1, Adventure Town: Inns Volume 1 and Adventure Town: Wharf Volume 1. Some of the tiles from these range are available in the free Annual 2 supplement. There is also a small text file of printing tips, should a hardcopy version be desired - there is no print on demand version available from RPGNow. The two primary PDFs between them have 260 pages of content.

Credit: Roleplaying Tips/James Mathe/eGDC LtdThe PDFs are fairly minimally illustrated, with only three full colour maps of taverns and inns; the same ones that are also provided in separate PDFs. The book has three chapters preceded by a section about it and how to use it to try and remove the clichéd nature inns and taverns tend to have in role playing games. They are so often a source of adventures and the area where various non-player characters (NPCs) are met that they have been overused, and using the concepts in this supplement is intended to add more interesting factors to them again.Chapter 1, How to Design, covers the game purpose, or purposes, that the location being designed is intended to serve. Inns and taverns intended for background or for encounters will have different needs to those that are intended to be an integral part of an adventure. This chapter covers the many different uses and purposes, including how to make a location have a more important game role as it is visited more frequently. upgrading it from a mere background location to a fully fleshed out location.Chapter 2, Design Elements, covers designing everything about the inn, tavern or restaurant, from its construction, appearance and location, to its hours of opening and food, drink and services, as well as covering all the different possible staff types in detail, from the owner down to the lowest stable boy, and including staff that may be temporary in nature. Also covered in this chapter is any influence magic may have; this information is only really suitable for a world in which magic is comparatively common.Chapter 3, Charts & Tables, is in a separate PDF and is the longest chapter and is mostly pages and pages of charts. A large proportion of this section is a range of inn and tavern names, with the rest being examples of different adventure hooks, patrons and encounters, plus menu ideas and furnishing and describing the inn or tavern.

Credit: Roleplaying Tips/Skeletonkey Games/eGDC LtdThe three separate inn and tavern maps made with the e-Adventure tiles can help give some idea as to how a location should be mapped out. These are in colour, and are decent enough to be used if required. They also give an idea as to how the tiles sets can be used to create new locations.

The supplement may be specifically aimed at the D20 System, but many elements of it are generic enough that this should not be a problem. The various sections on magic in chapter 3 contain the most extensive references to the D20 System, in particular specific spells and magic items found in that game. It is probably not as suited to locations that aren't set in a fantasy world, but some use can still be made of it in those circumstances.The two main PDFs are extensively bookmarked, making it easy to find relevant chapters and sections. Presumably, they are provided separately in order to reduce the size of the PDF by having two smaller ones rather than one large one, although it's doubtful as to whether this is needed. Printing the book out to create a hardcopy may be a bit ink intensive, as all the pages have a decorative edging, which will result in a rather unnecessary quantity of black ink being used on printing.Chapter 1 thoroughly covers the various potential uses an inn or tavern has in a role playing game, and how to use them. There is also a simple design process that can be followed to create a tavern, inn or restaurant, which can be followed using the information in the later sections of the book, allowing one to be designed from scratch and cover all the information and details that are needed.Chapter 2 has quite extensive coverage of probably every single type of staff member that could be found working at one of these locations, including what they do and adventure hooks for the different classes of staff. The sheer number of possible adventure hooks from an entire inn of staff is enormous, although using them all in one location would be overkill. It still allows a wide variety of adventures to be started simply using the staff, and not any clientele.There are an awful lot of different names that can be used for inns and taverns in chapter 3, and they take up a large proportion of the book. These sections may have worked better as some type of random generator tables. The other parts of chapter 3 are of probably variable use; some, such as the food tables, are simply collections of food, although being gathered into one place is useful. Others are of more use, such as the themes, hooks, sample price lists, encounters and patrons.Those GameMasters (GM) who are already experienced with creating their own locations may already understand the process as described, but those that are less experienced, or are simply short on time, can follow the design process to create their own memorable inns, restaurants and taverns that will enhance their game. Inns & Taverns Essentials is definitely a useful supplement for any GM wanting some help in making their game more memorable. 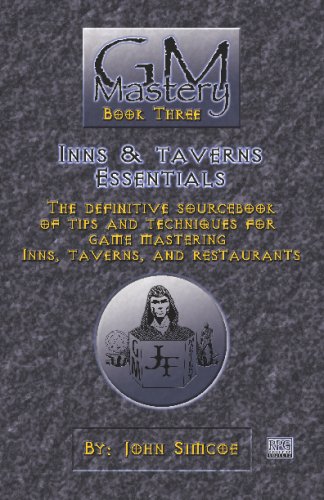