Look for Quarter Horse related merchandise on Amazon. You too can earn money from writing articles by signing up for InfoBarrel.
InfoBarrel is a writing platform for non-fiction, reference-based, informative content. Opinions expressed by InfoBarrel writers are their own.
InfoBarrel > Entertainment > Hobbies

When people think of horses, the tendency is to bring to the fore images of great, thundering war horses or the lissome, but still quite powerful, racing Thoroughbreds.  Others may tend to think of the smaller ponies of the Pony Express or of the small Shetland pony that was rented for a child’s birthday party.

Although all of these fondly recalled animals have their fans, none are America’s most popular. That honor belongs to a compact and sturdy piece of horseflesh known as the American Quarter Horse.

Credit: Magnolia Quarter Horse Farms, 2012
Wild Horses
A version of today’s equine roamed the Americas before the last great Ice Age.  When the leviathan ice masses formed, and the Bering Land Bridge opened up as sea levels dropped, the horses of the Americas (along with camels), for whatever reasons, migrated off the face of the Western Hemisphere as other mega-fauna moved in.

Credit: scientificamerican.comThe Spanish re-introduced the horse to the Americas.  Upon their arrival in South America and Mexico in the early 16th Century some of the horses they brought escaped.  Over time, these animals established themselves in the chaparral of Mexico and migrated northward into the North American Southwest.

The Mexican natives were the first in the Americas to make the horses a part of their working lives, having seen the example set by the conquering Spaniards firsthand.  Native Americans in what became the United States followed suit.

It was the Mexican vaquero – the Spanish word from which “buckaroo” is derived – that popularized the little wild Mustangs (descendants of the original renegade horses of the Spaniards) roaming the mesas and scrublands.  The speed and agility of these animals made them ideal for cutting out animals, and their stamina made them ideal for long cattle drives.

Thoroughbreds were introduced to Colonial America by the English early in the 17th Century.  These were the horses used for working the fields and as draft animals.  The original horses of the Conquistadors were of native Spanish, Arabian, and Berber stock (the Berber was called “Barb”).  The Barb Horse (named for the African Barbary Coast) was a hardy import from North Africa thanks to the Moors as they invaded the Iberian Peninsula (starting in 710 CE).

As the English Thoroughbreds were also used as race horses, American colonists, wanting a faster animal, began breeding these with several different horse species (considered native to the Americas at the time), including the original horses domesticated by the vaqueros and the Native Americans.

The slightly more compact, hardier, and agile horses were favored in races running a fourth-mile course, a distance that required speed as well as stamina.  Such horses, those that were specifically bred to run the quarter-mile, were coined somewhat verbosely as “The Celebrated American Quarter Running Horse”.  This moniker was later shortened to “Quarter Horse”.

A Quarter is not Less
In 1728 in England, one horse (The Godolphin Arabian) changed the racing industry in that country.  This stallion’s offspring were highly prized; and a wealthy Colony of Virginia tobacco planter named John Randolph (1742-1775), imported a grandson of the great Arabian.  Randolph bred this import with his Colonial mares (containing bloodlines from the vaquero and Chickasaw Indian ponies), forging the archetypical American Quarter Horse.
Though he is not claimed to be the founder of the breed, he did establish its baseline characteristics, shaping the desired breed-specific traits.  These horses were fast over the quarter-mile, and that speed was passed on to successive generations.  Randolph set the bar, in his words, for “compactness of form, strength, and power”.  [As an interesting side note: Randolph’s son, John Randolph of Roanoke (1773-1833), became a member of the US House of Representatives from Virginia, a US Senator, and later Minister to Russia.  He also served as Thomas Jefferson’s spokesperson in the US House of Representatives.]

Genetically, the modern Quarter Horse found completion when existing stock carrying bloodlines from John Randolph’s horses were later bred with the wild Mustangs roaming freely west of the Mississippi River.  These horses were the descendants of the Barbs the Spaniards had brought in the 16th Century, and it was the same horse the Plains Indians used for warfare, hunting, and travel.  The Mustang blood added vigor to the Quarter Horse breed.

The Quarter Horse, its ancestors used by the Mexican vaqueros and the Native Americans on the frontier, also became favored ranch animals by cowboys in the American West.  The animals were even-tempered and hardworking.  It was used by Plains pioneers to break up the prairie sod for houses, it was the preferred mount of the buffalo hunters, and its rugged physique and temperament made it a sure winner for the harsh conditions of the West.

No Two-Bit Ride
The breed gained recognition, and one particular horse rose to great acclaim in the late 19th to early 20th Century.  This animal, named Peter McCue (foaled in 1895), was originally registered as a Thoroughbred, but its bloodline was later disputed by its owners who claimed it had truly been sired by a Quarter Horse.

Credit: public domainBy 1940, the breed’s numbers were unclear and guidelines for characteristics had not been formalized.  The American Quarter Horse Association (AQHA) was established that year with the specific goal of promoting the breed, setting standards of physicality, and registering the animals properly so bloodlines could be vetted. The requirement then was that the horse be able to run a quarter-mile course in no more than 23 seconds (39 miles per hour).  Some, however, have been clocked at speeds of about 55 miles per hour.  Since its start, the Association has registered 5 million Quarter Horses in America, with roughly half that

Credit: Magnolia Quarter Horse Farms, 2012 number registered in the 1990s alone with an upsurge in popularity and in economic growth in the country.

The animals have seventeen recognized color variations and can range from almost snow-white to the darker shades of chestnut and beyond.   The horses are sturdy, built along the lines of a bulldog (powerful, with what is termed heavy “heart girth”, in the chest) tapering slightly to slightly finer lines in the hindquarters.

They are not subject to extraordinary health issues, though – as with any animal – they will suffer if neglected or improperly maintained.  Routine feeding includes plenty of pasture for grazing (a rule of thumb requires 3 acres per animal – optimally this should be 5 acres) and access to fresh water.  Grazing can certainly be supplemented with regular hay feedings.  Most good breeders also add a dose of daily grains (quantities vary).  Mineral supplements in a powder, along with a lipid supplement (also in powder form to promote healthy hoof growth) are usually mixed in with feed stock as needed.

Credit: Magnolia Quarter Horse Farms, 2012A good boarding environment is important.  Well-ventilated and debris-free interior spaces are a must.  Stall care is important for those animals that, due to weather or other circumstances, must stay inside a structure.  Insuring that stall floors are clean of manure on a regular basis with fresh floor covering (such as straw or sawdust) is essential to the

Hoof care is critical as horses with poorly maintained shoes or trim work can become lame or otherwise have spinal carriage issues.  Establishing a relationship with a qualified and experienced farrier is critical – this person can ensure the horse is always in the best of physical shape with respect to its feet (the greatest stress points for the great weights the animals carry, horse and rider).  The farrier has to be a combination physicist (to understand the forces stressing the horses tendons, legs, and joints), part-time chiropractor (to understand alignment issues along the horse spine), and certainly he or she must sweat a lot over cleaning, trimming, and shoeing.  It is a very physical job.  Farriers may spend as much as an hour on one animal properly working the hooves and shoeing it all the way around.

Current population of the breed in the US outpaces all others by a comfortable margin.  Quarter Horse racing has increased in attendance in recent years.  The Quarter Horse is a versatile animal, equally suited toward both Western style and English riding disciplines.  It is popular among rodeo riders, barrel racers, and jumpers.  The animals have appeared countless times in Western movies and on television Western programs. The horses are very even in disposition and are great favorites among young riders as well as older people.

Author’s Note: Special thanks to Ms. Tammy Garrison and Dr. Terry Likes of Magnolia Quarter Horse Farms in Bowling Green, Kentucky, for their patience, and for allowing

Also, gratitude goes to Mr. Paul Eastridge and his wife Ms. Jennifer Eastridge of Casey Creek, Kentucky.  They graciously answered questions and demonstrated the involved work of a farrier.  With 18 years experience, the Eastridges run a successful business in the south-central Kentucky area under the moniker Bar-E Farms Farrier Service. 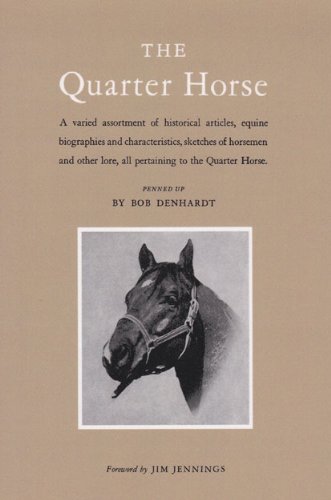