Never Eat Alone is a non-fiction bestseller that guides the reader in how to network and build relationships to further their careers. Networker and relationship builder Keith Ferrazzi claims that the most important part of success is creating connections with others. He discusses how you can form new relationships and leverage existing ones to achieve your goals and become successful.

Early in the book, he discusses his childhood experiences. Growing up, he saw early on that influential people who were well-connected were able to leverage their relationships to help other people, who would in turn help them. He then realized that forming friendships was the key to success.

Ferrazzi himself had humble beginnings in Pittsburgh, where his father was a steelworker and mother a cleaning lady. Using his ability to connect with people, he went on to pursue a scholarship at Yale, a Harvard MBA, and a role as the youngest partner at Deloitte Consulting. Ferrazzi later became the CMO of Starwood Hotels and Resorts before moving YaYa Media as the CEO.

He discusses the people that he has met in his work, along with ways he keeps in touch and creates an emotional connection. Rather than taking what you need without giving anything back, he suggests providing generosity and helping other people make connections. Another key to relationship building is to “ping” people: communicate with people and reach out for the sake of it, not only when you need it.

There are profiles of famous people in the book, including Benjamin Franklin, Bill Clinton and Eleanor Roosevelt, to name a few. He discusses their work, and how they use their people skills to become successful. Along with the general advice and strategy for building relationships, there are tactics offered on reaching out to people. For instance, Ferrazzi give tips on how to get past the gatekeeper in the office.

Never Eat Alone is a book that emphasizes treating those you connect with more as friends rather than contacts. He teaches readers to be vulnerable and to open up, rather than keeping people at a distance. 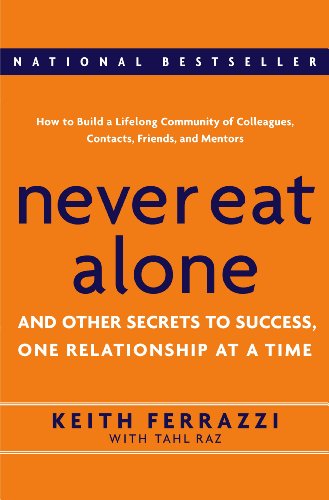 While reading this book, I felt captivated and intrigued by the book, finding myself wanting to see what it was all about. It is clear from the book that the author knows how to captivate an audience, sharing his experiences and explaining how forming relationships can be possible for anyone to get ahead. As you read along, though, it does seem that Ferrazzi is tooting his own horn at times while portraying himself as a bit of an “underdog”, although he did go to a top prep school. He seems to name-drop quite a bit and praise his own accomplishments.

The book is well organized into four main sections, with numerous subsections under each for easier referencing. The different snippets, such as profiles of famous connectors, are mixed in with his personal stories and advice to create a refreshing change of pace. Sometimes he can be long-winded, dragging out some of his advice over pages in what could have been succinctly described.

Ferrazzi gives feel-good advice on “climbing the ladder” by telling readers to be generous, don’t keep score, and “ping” people constantly to keep on the radar. Of course, it all sounds nice and well and is indeed useful at times, but may not always be practical. In reality, people will often be skeptical of your motives. Not everyone will want to befriend you simply because you are generous (in fact, most won’t). Things are not always win-win as he suggests, and “pinging” people does not mean the person will want to maintain a relationship. In fact, it could very well just annoy the other person.

There were many points in which he gave solid nuggets of advice, such as providing a “deep bump” – a quick slice of intimacy at a gathering rather than tossing out business cards left and right. He also discusses how to find out what interests and excites people, as well as their personal needs and wants. These pieces of information can then be used to help the other person, who will be hopefully grateful for your help.

Ferrazzi emphasizes in the book that you should form friendships with anyone, and not compartmentalize people into professional connections and personal relationships. He argues that there isn’t a line between the two, like so many people believe. The author talks about how he himself blurs this line, treating colleagues and friends alike as all friends.

His advice in turn encourages readers to treat the different people in our lives as all personal connections. This idea can help encourage people to reach out to others and to treat people with warmth and care, regardless of their relationship to you. At the same time, in reality this is often not possible. Professional relationships means there are boundaries that can make it difficult for relationships to be more personal. Nevertheless, the thought process behind blurring the distinction can be a good takeaway in terms of how to treat the people around you.

Never Eat Alone was both a guide and an inspirational read, giving readers insight into the art of networking and seeing examples of people who used their social skills and ability to connect. Such connections and traits helped bring them to heightened successes of life. Readers could look at such examples and see what makes the person successful.

Although Ferrazzi is quite brazen at times, the best part of his advice is to ask for something if you want it. Be bold! He shares how he has a fear of rejection when reaching out to someone, but does it anyway. This is a very solid statement he has made – he admits he is vulnerable and “human” like everyone else, but overcomes his fear. Readers are encouraged to push themselves out of their comfort zone to reach out to other people and to get things done, since asking for something is better than not doing anything at all.

Some of his advice will work for you, and others will not. He gives a lot of advice throughout the entire book. But, it’s up to you, the reader, to discern which advice can be incorporated into your own life. Networking is an intricate art of which this book has scratched the surface and covered the fundamentals.

Overall, this book was a strong and interesting read. If you haven’t done so, I strongly recommend that you read it. 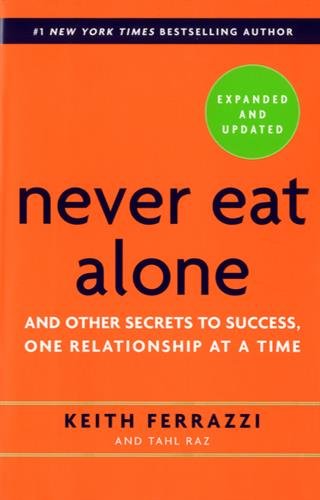 Never Eat Alone, Expanded and Updated: And Other Secrets to Success, One Relationship at a Time Amazon Price: $28.00 $10.94 Buy Now(price as of Nov 14, 2016)
Next >> A Dark and Controversial Crime Fighter