Follow Me on Twitter @ DebW07 and on my blogs: Introspective Pics DebW07 Do you like to write? Would you like to earn money writing articles?  Start here: Write for Info Barrel today!
InfoBarrel is a writing platform for non-fiction, reference-based, informative content. Opinions expressed by InfoBarrel writers are their own.
InfoBarrel > Lifestyle > Politics & Government > US Politics

Dr. Condoleezza Rice was the 66th United States Secretary of State, serving in the administration of President George W. Bush. To date, Dr. Rice has occupied the highest position that an African-American woman has held in a presidential cabinet.  She is the first black woman to serve as US Secretary of State, and the second African-American, after predecessor Colin Powell, and the second woman to serve in the position, after Madeleine Albright.

Born November 14, 1954, in Birmingham, Alabama, her parents were both college professors.  Her unusual first name is derived from the Italian for an opera stage instruction, con dolcezza, meaning with sweetness.  Rice mastered the piano at three, and her parents were determined that she would understand and have all the benefits of an education. The family would "visit universities like most people visit national parks."  Rice said in a 2011 interview, adding that her family once drove 150 miles out of their way to see Ohio State University.

Rice was raised in segregated Birmingham during the civil rights movement. A childhood friend, 11-year-old Denise McNair, was one of four young girls killed in the bombing of Birmingham's 16th Street Baptist Church in 1963. When speaking about the circumstances surrounding Birmingham in the 1960s, Rice said Birmingham became known as "bombing-ham," as bombs went off in the communities, including hers, quite frequently.  Her parents always said to her, "You might not be able to control your circumstances, but you can control your responses to your circumstances."

Rice skipped the first and seventh grades, entered college at 15 and holds three degrees, including a doctorate in political science. She earned her Master's in just one year's study and by the time she was 26, she had earned a Ph.D. in Political Science.  She was a professor of Political Science at Stanford from 1981-99, and from 1993-99 she was Stanford's provost, responsible for overseeing the school's budget and academic programs. 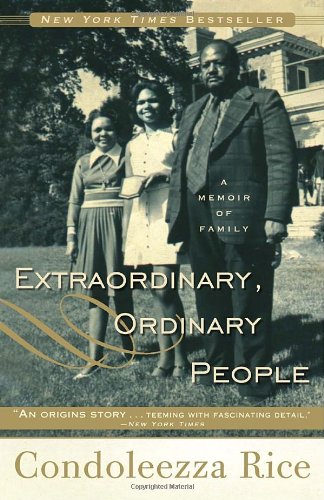 Rice, originally a Democrat, who voted for Jimmy Carter in 1976, said she became a Republican after watching the 1984 Democratic Convention. The appeals from Democrats' to "women, minorities, and the poor" sounded more like appeals to the "helpless and poor." Rice was offended at being marginalized and patronized as a woman, and that's when she decided to look into the Republican Party.

Member of the GOP

Rice served as the Soviet and East European Affairs Advisor during the dissolution of the Soviet Union and German reunification, during the administration of George H.W. Bush.  She was President George W. Bush's National Security Advisor during his first term, before succeeding Colin Powell as Secretary of State in 2005.

In 2011 talk show host Piers Morgan interviewed Rice and asked about the issue of WMDs: “The war was sold to the world, really, not just on the fact that Saddam was a bad guy but because he had these weapons and would use them.  They didn’t turn-up, these weapons never turned-up. Do you regret using the ‘weapons of mass destruction’ as a pretext for war?”

"The fact is that what you know today can affect what you do tomorrow, but not what you did yesterday, and at that time all the intelligence said that he was acquiring weapons of mass destruction.  Again, this was someone who’d used them before, so this wasn’t a theoretical possibility."

When asked if she believed her parents would have been proud to see all of her achievements, Rice stated:

Rice was also asked if she missed her parents and she said:

"Oh, of course. Every day, but I'm a deeply religious person, and I believe that spiritually, we are united across the chasm of death. It's not a daily occurrence but there have been times when I have felt my mother and my father very, very strongly. So I say in the book [Extraordinary, Ordinary People: A Memoir of Family], and I really mean that very often I feel their presence more than their absence.”

When asked why she accepted the job of United States Secretary of State, Rice said:

"Well, because there's no greater challenge, and there is no greater honor than to be in public service. You know, it really is, and I know some people think that it's a rather hackney place that you want to serve. But I find that the great majority of public servants across the entire political spectrum come because they believe in the United States, and they want to change the world. Those are not bad motives. Sometimes, we tend to impugn the motives of public servants. But I can assure you they're not there for the glory. They're not there for themselves."

Rice is also a serious football fan, who once told the New York Times that she wants to one day be the commissioner of the NFL. ''I think it would be a very interesting job because I actually think football, with all due respect to baseball, is a kind of national pastime that brings people together across social lines, across racial lines. And I think it's an important American institution,” Rice said in 2002.

During a farewell interview in early December 2008, Rice indicated she would return to Stanford and the Hoover Institution "back west of the Mississippi where I belong." But beyond writing and teaching did not specify what her role would be. Rice's plans for a return to campus were elaborated in an interview with the Stanford Report in January 2009. 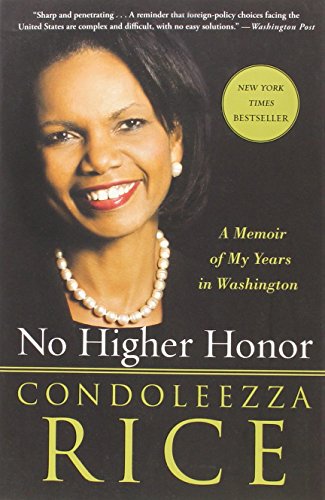 California Workers' Compensation: What to Do If You are Injured at Work
Life After Death The Evidence by Dinesh D'Souza
Anger, Revenge, and Forgiveness
Next >> The Stories Behind American Political Mascots