Dark Day of May: New England's 1780 Plunge into Blackness

Darkest Hours of the Darkest Day

’Twas on a May day of the far old yearSeventeen hundred eighty, that there fellOver the bloom and sweet life of the Spring,Over the fresh earth and the heaven of noon,A horror of great darkness, like the nightIn day of which the Norland sagas tell,—The Twilight of the Gods.-    from “Abraham Davenport”, 1866, John Greenleaf Whittier

Night, and its attendant darkness, has been something upon which human kind has placed a sense of foreboding.

Night was the time for the ancients when unseen animals roamed.  It was when spirits walked the earth; at certain times of year, such as what evolved into the observance of Halloween, these “things that go bump in the night” were alternately dreaded and pursued.  That which cannot be seen or understood tends to bring out the superstitious natures of simple folks.

Perhaps one of the more bizarre events in relatively modern times was when a huge section of America’s New England area was plunged into sudden darkness.

This was not a result of a power outage because it happened at a time in American history when there were no public utilities.  Rather, the darkness descended during what should have been daylight on an early Spring morning in May of 1780.  The sun was obliterated from the sky by a pall that spread over the land.

And for those that witnessed New England’s Dark Day it may as well have been the End Times, for many thought Armageddon was nigh.

Darkness on the Edge of TownThe morning of May 19, 1780, in Rupert, New York (on the Vermont/New York State border), was an odd one, indeed.

It was spring in New England.  Birds should have been chirping; other small animals should have been rousing for the day.  Instead, stillness lay across the fields and woodlands surrounding Rupert.  Though it was past sunrise, no sun was visible.  The sky was black, as black as it had been overnight. Denizens knew it was morning; it was simply that the sun could not be seen. A bleakness obscured everything, darker than an eclipse and nearly as pitch black as night.

With no mass communications outlets (the telegraph was still half a century from being invented) the town’s residents had only each other to turn to and ponder what happened.

As the dark day wore on, thanks to itinerants and other people passing through, reports of what happened in Rupert spread to other nearby towns.  Word-of-mouth was rapid, and it was learned that Rupert was not the only area afflicted by this daytime “night”—many other settlements were similarly plunged into darkness.

In Massachusetts the morning had “dawned” with a cloudy sky.  A slight reddish hue hung in the air, and thunder rumbled in the distance.  An ominous south-west wind prevailed.

For the next roughly 36 hours an area covering several thousand square miles, stretching from Rupert northeast all the way to Portland, Maine, and along the Atlantic Coast of New England (including Boston) and deeper inland to Providence, Rhode Island, and parts of New Jersey, darkness in the day time reigned.  The people were first stymied—then, they were terrified.

Armageddon?The depths of the darkness were not fully appreciated until later in the day.  Around 2 PM Eastern Time was the darkest hour, with people lighting candles in their homes to see with any degree of clarity.

“The dunghill fowls went to their roost, cocks crowed in answer to each other as they commonly do in the nights; wood-cocks, which are night birds, whistled as they do only in the dark; frogs peeped; in short, there was the appearance of midnight.”

He also noted that, by 4 PM, “there appeared quick flashes or coruscations, not unlike the aurora borealis”.

The American Revolution (which did not officially end until 1783) was still being fought in many places: on the Eastern Seaboard and in the interior of the nascent United States.  The atmospheric conditions, regardless of warfare flotsam, did not go unnoticed.

George Washington, posted in New Jersey at the time, made note in a field diary about the changes in the atmosphere.  He stated there were uncommon clouds, “dark and at the same time a bright and reddish kind of light intermixed with them—brightening and darkning [sic] alternately.”  One of his soldiers, in a personal journal, also noted that “whippoorwills sung their usual serenade” (something that usually happens at twilight or shortly after dark).

These sorts of changes in the environment for many people in the nascent US—steeped as they were in Christian superstitions and ignorance—tended to be perceived as harbingers of doom.  Because such unexplained phenomenon frightened those with little or no education (or no appreciation for what the planet can do at a moment’s notice) leapt to the unhealthy and reactionary conclusion that the darkening skies were portends of Armageddon.  The Biblical End Times (as directed by the allegorical Book of Revelations in the New Testament) was upon them.

People along the northeastern seaboard (and in the interior as well) gathered in churches and other places of congregation to contemplate their fate.  Most believed a judgment was upon the land and its people, and many began to get their affairs in order (a pointless exercise—if it truly were the End of Days, then there would be no reason to engage in such behavior as no one would be left to remark upon or notice such actions).

However, there were a few among the multitude who used their brains and figured out that, while not explainable immediately, there was most likely a natural cause for the sudden nightfall during the day.  Some of these more rational individuals cited a possible eclipse of a type not previously known.  Considering that eclipses were well-known phenomena and also easily predicted this was put off as a wrong conclusion. Others, though, recognized that it may have been an atmospheric interference from a source so far removed that its appearance could easily be construed as supernatural for the ignorant masses.

Smoke Gets in Your Eyes & the (Tree) Ring of TruthWhile many areas suffered through near total black-out conditions, other places were only “grayed out” or experienced a minor diminution of sunlight intensity. The most southerly expanse of blackness barely touched Philadelphia, which experienced only something akin to a heavily overcast day.

Once the darkened conditions ended, in the areas most deeply affected, there remained much speculation.  Obviously, there was no Biblical Armageddon in the offing as people awakened the next day to normal weather that included a shining Sun.

The phenomenon remained a mystery until the early 21st Century, over 220 years after the fact.  Ignoring the ignorant Christian hysteria of the Armageddon angle, researchers focused instead on the written eyewitness accounts (documented in sources in more modern times as far back as 1950, but sans explanation) of the more rational observers.  The descriptions led to the conclusion that the blackening of the skies had to have been caused by a huge forest fire, albeit one not in the immediate environs affected by the black-out.

Tree rings—the annual expansion of a tree’s pithy material capped by outer bark—can tell many things about climate and the environment.  These annual growths are revelatory.  Relatively thin rings can indicate a year of harsh growing conditions, while a thicker cross-section indicates more favorable growing conditions.  Also, trees can show signs of trauma in their internal ring structures—insect damage and other injuries to the bark, such as hack marks or lightning strikes, are “healed over” and stay inside the tree to tell a story to anyone trained to “listen”.

In 2007, a group of investigators (from the University of Missouri’s Department of Forestry among other areas) took a scientific look at the mystery of New England’s Dark Day.  Using data gathered by amateur foresters of the 18th Century and other many other sources they discovered that there had been a massive forest fire in the Great Lakes area of the US that also extended into Canada.

Examining trees in the suspected affected area, and looking at their rings in cross-section, evidence of a major conflagration was seen.  The fire (and it was not only one fire but several

Credit: public domainconcurrent ones) raged in sparsely populated areas, so not many people were around to report on its progress.  Prevailing winds and upper atmospheric conditions drew the smoke of the fire several hundred miles away to the northeastern US.  Thus, the conclusion was simple (and one which several smarter folks had hit upon in 1780): a forest fire had sent smoke away from its source and engulfed parts of the world untouched by the fire.

The same phenomenon was seen over a century later when Krakatau (or “Krakatoa”) then an active volcano (near the Indonesian Islands chain, and “rebuilding” itself daily) erupted in 1883.  The effects of this massive explosive force from the earth’s bowels were global.  Blackouts from volcanic ash, heated gasses, and other detritus blanketed the upper atmosphere and negatively affected weather patterns for years (with a colder average temperature).  Strange lights were seen in some places, a result of super-heated and ionized particles “flashing” high in the sky.

Today, thanks to mass communications and far less silly interpretations (no one would conclude Armageddon was nigh simply because the sky darkened for a day), such “mysteries” are readily solved and would not take over two centuries to debunk.  But, in consideration of the times, perhaps, for witnesses to New England’s Dark Day it meant sure hell-fire and damnation. 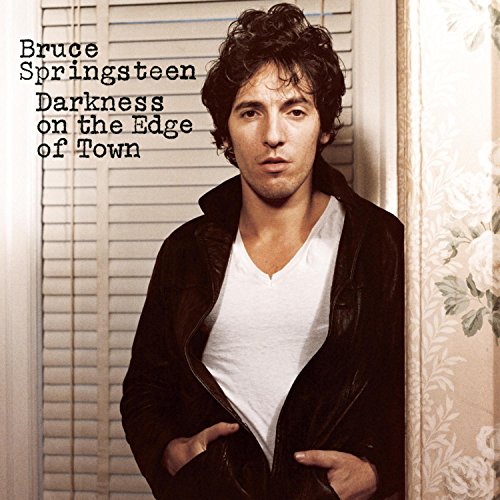 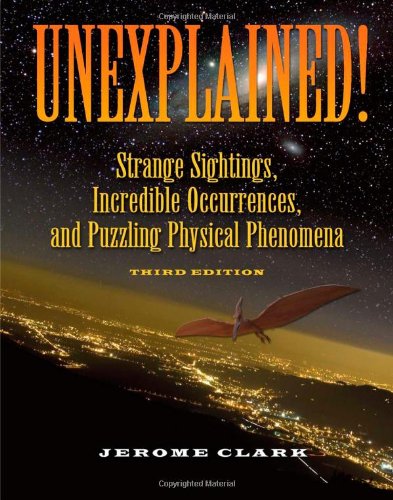 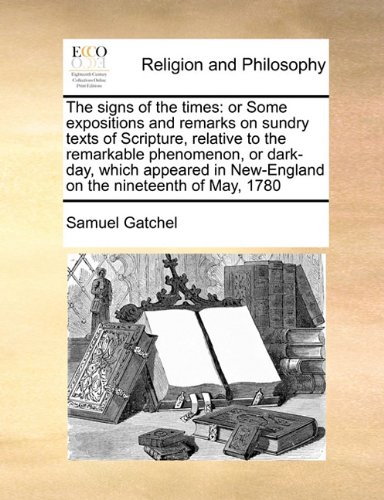 The signs of the times: or Some expositions and remarks on sundry texts of Scripture, relative to the remarkable phenomenon, or dark-day, which appeared in New-England on the nineteenth of May, 1780 Amazon Price: $14.75 $11.03 Buy Now(price as of Nov 3, 2016)
Next >> Fashioning a Reign: 90 Years of Style from the Queen's Wardrobe - Magnificent Exhibition at Buckingham Palace