Earthquakes in London - A Sedos Production at Bridewell Theatre

First performed in 2010 at the National Theatre, this play comes from the pen of award-winning playwright Mike Bartlett.

It’s only a few weeks since I was at the Bridewell watching Pippin and wondering at the amazing versatility of this outstanding award-winning company. How do they do it – from extraordinary musicals such as Into the Woods, Hot Mikado and Pippin to plays such as The Devils, London Road, and now Earthquakes in London?

Excesses of the Present and Fear of the Future

Taking a long hard look at humanity, Earthquakes in London takes us on a rollercoaster journey from 1968 to 2525 and back again. It highlights the excesses of the present and an obsessive fear of the future.

Social breakdown, population explosion, nightmares, burlesque strip shows and worldwide paranoia – this play has it all. We follow the story of three sisters as they navigate their dysfunctional lives, while their somewhat bizarre, but brilliant scientist father, foretells global catastrophe!

This is a technically challenging show with lots of different characters, locations and time periods. Director Chris Davies and Choreographer Tom Leonard speak exclusively to Infobarrel about the demands of this production.

Infobarrel: What inspired you to direct this play?

Chris: I wanted to direct something that was contemporary and had a great story at its core, but which would also challenge me in terms of cast size and the technical feats the play demands. Whenever I tell somebody I’m directing this play they say ‘that’s very ambitious’. So that’s what I’m doing, I’m being ambitious!

Infobarrel: You directed Pornography in 2016 – how did that experience influence your direction of Earthquakes?

Chris: Sedos were a great supportive company to direct for during Pornography, so coming back to them with a larger production felt like a natural decision. If I was going to direct something as epic as Earthquakes it would only have worked if I had access to such talented actors and backstage crew, all of whom are passionate about producing high quality theatre to rival any professional production.

Chris: Auditions were tricky as I was looking for different skillsets from only one pool of actors. For the Principals, it was more about naturalistic acting and suitability for a specific role. For the Ensemble, it was about having the ability to multi-role. Everyone needed to have a team player spirit, and I’ve luckily found that in all of them.

Chris: This show is a great technical challenge. Lots of different locations, lots of characters, presented in short intermingling scenes staged at a rapid pace. It also throws in a musical dance sequence, singing, physical theatre, and forever changing shifts of tone and genre. Trying to connect all of those things together into one cohesive whole has taken time and patience. But the cast have shown real determination and faced every challenge thrown at them.

Infobarrel: You’ve been involved in a number of Sedos productions as both a choreographer and a performer. Can you tell us a bit about your Sedos “career”?

Tom: My first show with Sedos was West Side Story in 2011 (directed and choregraphed by Kim Barker, of Earthquakes fame!).  I was approached as the team needed a boy to dance the dream ballet sequence. I love a dream ballet so obviously jumped at the chance!  And so began my involvement with Sedos. Since then I have been teaching the weekly jazz dance class (Sedance), as well as appearing in other shows such as Hot Mikado, and choreographing Guys & Dolls and Legally Blonde.

Infobarrel: How did you get involved with Earthquakes?

Tom: Much like West Side, I was approached to help with the movement aspects of the piece. I think it’s fair to say my previous choreographic experience has been pretty razzmatazz, so this represented a new challenge for me; working on movement for a cast of people that wouldn’t traditionally call themselves dancers (but nonetheless perform as well as any cast I have rehearsed with).

Tom: I have been very impressed with the dedication of the performers to the complicated dance and movement number we have worked on together. When rehearsing for a musical, you teach a section of choreography, only for most people to forget it by the next rehearsal. Not so for the Earthquakes cast.  They clearly have spent the necessary time revising and practicing the steps. I have been so impressed how they have always come back to rehearsals with everything nailed. Very refreshing! 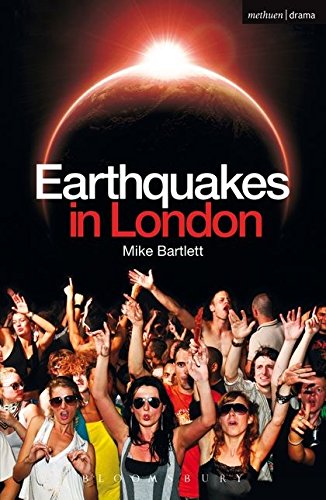 This is a highly complex play but Sedos kept it very simple. It's this simplicity, coupled with a lot of extremely hard work and dedication, that  has created another outstanding production - a most memorable evening at the theatre!

As usual the company has a very full programme of forthcoming productions including:

The company also runs a busy programme of activities and workshops to help encourage and develop its members’ skills. Perhaps that explains the exceptionally high standards achieved and continually maintained by this outstanding society. If you’re interested take a look at their website – you too could be part of the bigger plan!

Get Directions14 Bride Ln, London EC4Y 8EE, UK
Next >> Movie Review: The Girl on the Train