Year of the F-Bomb

Many mainstream entertainers have things in their past that perhaps are cringe-worthy if not downright shameful.

Sylvester Stallone, for example, early in his bid for big-screen stardom made a crummy soft-core porn movie in 1970 called The Party at Kitty & Stud’s.  Stallone was “Stud”.  In this film an underfed Stallone rolls around in snow, poses in front of a mirror (flexing his minuscule muscles), and beds a few hippy chick leftovers (one of whom is a black woman with a big ’fro who does an amazing job of shaking her hindquarters in front of the camera during a strange party scene).  The movie was later renamed The Italian Stallion to capitalize on Stallone’s success in his debut blockbuster, Rocky. [Take a look at his boxer’s robe in Rocky – on the back is “Italian Stallion”.]

All of these films were done by people wanting to make a buck or to get noticed (in the era before YouTube and home-made sex tapes that “got leaked” to the Internet or other media outlets).

Other artists, such as musicians, had their faux pas

Quirky behavior might be expected from such a one as Jimi Hendrix, but when one thinks of folk rocker Al Stewart (of 1976’s Year of the Cat fame) controversy and a potty-mouth generally don’t come to mind.  However, in 1969, Al Stewart earned a dubious honor by becoming the first mainstream artist to use the “F Word” on vinyl.  Not only that, he had the word printed on the album’s gatefold lyrics for the world to see.

F-Bomb
Words are usually innocuous on their surface.  Some words, such as “nigger”, are hateful and mean-spirited, and it is the intent behind the speaker’s utterance that adds power to such terms. In the pantheon of human cursing and swearing, though, for whatever reason almost no word carries more of a taboo or the ability to cause a reaction in most people than the “F Word”.

The word itself, despite crazed Web rumor-mongering, is not an acronym for the ridiculous phrases “Fornication under the Crown King” or “For Unlawful Carnal Knowledge” or any other such terms.  Furthermore, it is not a diminutive of a person’s name (from a late 13th Century criminal proceeding – that man’s name was a variant spelling of “fulcher”, a word that meant “soldier” in Old English).

The “F Word” is more than likely based in Germanic languages.  The fricative sound of the hard “k” and the introductory “f” make the word, regardless of definition, guttural and harsh sounding (as the word “freckle” has a certain unpleasant sound), bearing the hallmarks of such dialects. Its most cited sources are ficken (German), fokken (Dutch), fukka (dialectal Norwegian), and fokka (dialectal Swedish).  All mean “sexual intercourse” in addition to some having meanings associated with striking (as in hitting someone).

Weird Al
Al Stewart, future troubadour, was born Alastair Ian Stewart in Glasgow, Scotland, in 1945.  His mother and he moved off to England when he was young, however, so perhaps that is more his home than Scotland.

Regardless of point of origin, Al (like many of his fellow British Islanders in the early 1960s) got bitten by the music bug.  Part of it was in response to the post-World War II malaise that hung over the countryside – Britain did not recover as rapidly from its war-torn state as other places, and despair was in the air.  Kids then needed music to have some sense of place and hope.  Furthermore, there was a revival of folk music in the Islands and bands such as The Kingston Trio (though American) enjoyed a vogue with British youth (as did American R&B acts and the manic skiffle craze, an early British outlet for adolescent guitarist Jimmy Page years before Yardbirds or Led Zeppelin fame).

Unfortunately, Al realized he had some problems with his abilities as a singer and musician.  In a radio interview in the mid-1970s he pointed out that he knew his voice, in his own words, was wispy “and fey”, and early in his path he knew he could never be a great shouter or rock ’n’ roll animal screamer.

So, he focused on his guitar work, vowing to become a great guitarist.  In the same interview, though, he pointed out that it wasn’t very long after resolving to become such a great player he heard Jimi Hendrix for the first time.  Al realized he could never be a guitar hero like Hendrix, so he decided to become a “wordsmith, a rhymer”.

And that is exactly from what Al Stewart made his hallmark, his words.

What are Words Worth?
With a developing love of the romance associated with the folkie/troubadour – the “tortured” soul of the tormented, but sensitive, young artiste – Al Stewart worked on his song-writing at a time when most of his contemporaries worked up cover material.  Al had gone to Wycliffe College in western England.   But in the spirit of the depression felt across England he later wrote “Post World War II Blues”.

Al Stewart had the opportunity to work with a group

of musicians that later made super-star names for themselves.  For example, he bought his first electric from a guitarist named Andy Summers, who later worked in the power-pop trio, the Police.  This electric he traded for an acoustic which he felt was a better instrument to get across his sensitive songs of protest, angst, and love.  This switch from electric to acoustic got him his first steady gig – a weekly slot – in a Soho coffee house in 1965.

Other early brushes with greatness happened when Al acted as emcee at a folk club; he worked beside such future stars as Van Morrison and Cat Stevens.  He also met Yoko Ono who allegedly separated him from the only money he had left to his name – £100 (worth over $300 US then) – to fund one of her crummy “art” movies.

Elfin Magic Ain’t Enough
Al developed a following, and he managed to secure a spot recording some studio guitar work on a 1965 song by another act.  He caught the eye of a Decca Records’ A&R man for a one-off single, 1966’s “The Elf”.  This 45-rpm record (backed with a Yardbirds’ tune) was a musical section intoning a part of J.R.R. Tolkien’s Lord of the Rings.  It was a fabulous disaster, selling less than 500 copies (though future guitar god Jimmy Page played on it).

Despite Al’s lack of success with his first single,

Credit: Al Stewart; CBS/Columbia Records, 1969Columbia/CBS Records picked him up.  He went on to record six full-length LPs for that label.  His first record for the company played on his sensitive “rhymer” aspirations; it was called Bed-Sitter Images (in 1967).  The persona – of the romantic, tortured artist in his squalid bed-sit scribbling out his tunes to release into an uncaring world – is one Al cultivated for a time.

But songs about elves and bed-sitter angst were not getting Al Stewart the attention he needed.  His next disc in 1969, Love Chronicles, explored the hippie/folkie/troubadour motif a bit more deeply, with the album’s title track consuming the last 18 minutes of the record’s second side.

And it was that song that got unwarranted attention for the brash “wordsmith/rhymer”.  The tune is a narrative about the first-person singer’s sexual exploits, and in the penultimate line of the penultimate verse there it is: the “F Word”.  Or, at least, the gerund variant of the word (rhymes with “plucking”, used by Al two lines earlier in the rhyming scheme).  This disc by the unassuming folk rocker Al Stewart was the first mainstream record to carry the “F Word”. Not only did he sing the word, he insisted upon its being printed on the lyrics printed within.

It is not the first recording to ever carry the word, though.  Frank Zappa and Don VanVliet – a/k/a: Captain Beefheart – captured, on tape, a musical experience of being stuck in a toilet with “Lost in a Whirlpool” that features Beefheart singing the word “mother [blank] er”.  The song was recorded in either December 1958 or January 1959 in an empty classroom.  Certainly, there are other examples, though none reached the early level of publicity of Al’s disc.

As the 1970s waxed, Sex Pistols had their own controversy using the “F Word” along with some other choice invective hurled at Thames Television’s Today show host, Bill Grundy.  After goading from Grundy on December 1, 1976, the Pistols lobbed obscenities at him on live television – it ruined Grundy’s career.  This act did nothing good for the Pistols, either; many of their gigs were canceled in the wake of this fiasco thanks to conservative British outrage and overwrought and ridiculous hyperbolic media.

Credit: promo shot
Comparatively speaking, Al Stewart had left his controversies behind with his one faux pas back in 1969.  Love Chronicles, which contained the magical “F Word”, was named “Folk Album of the Year” by UK’s Melody Maker magazine.  And Jimmy Page also featured on the disc (as well as guitar great, Richard Thompson).

Early in 1976, the same year that Sex Pistols Rotten and Jones gave Bill Grundy a mouthful of very snotty punk attitude, Al Stewart had recorded a brilliantly melodic, well-written, and mature album called Year of the Cat.  The nearly seven-minute title track has an instantly recognizable opening piano riff.  Al later said that although the lyrics had initially been based upon the downward spiral of British comedian Tony Hancock (d: 1968), realizing no one in the United States would have any idea who Tony Hancock was he reworked the tune.

Credit: RCA Records, 1976The song’s structure is formed around the opening piano runs, played by Peter Wood.  Al said that he heard this sequence quite a bit during sound checks, with Peter Wood playing the unnamed melody over and over again as a reference piece to check his monitors and output.  The riff inspired Al to rework his song about Tony Hancock – “Foot of the Stage” (penned in 1966) – and with Peter Wood’s crystalline piano runs he created an FM radio classic.  Peter Wood (d: 1993) got a much deserved co-writing credit for the song – without that piano work it is nothing.

The rest of this record is similarly amazing considering

Credit: Sire Records, 1976what was going on in the world of music that year.  Disco reigned as “queen”.  The Pistols, Clash, and the Ramones would all cut their first sides that year – the LP Ramones would become one of the world’s best-known debut records.

However, Al Stewart’s entrant for 1976, while not loud or abrasive, was rich in topics – songs about 16th Century British mariner Sir Richard Grenville; a take on the Basque Separatist movement in Spain in “On the Border” (a tune with excellent flamenco/classical guitar work); a song about a female flying ace; and of course at least one bed-sitter song (“Broadway Hotel”).

Since then Al Stewart has continued to release music.  He performed at the first Glastonbury Festival in 1970 where a whopping 1,000 hippies paid £1 – about $3.00 US – to see him and a bunch of other acts in a festival setting.  He has played stadiums and larger venues.  Al Stewart does a lot of spared-down shows these days; his voice is still “fey” (but it has character, always has, and he never hides his British Isles’ accent or pronunciations).  His guitar work is good, but not great, but then again, he never tried to be a virtuoso.

What he is, indisputably, is a great “rhymer” – the man can write a song worth listening to over and over again, even songs without the “F Word” in them. 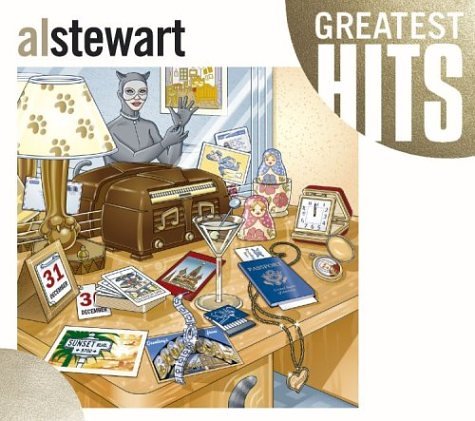 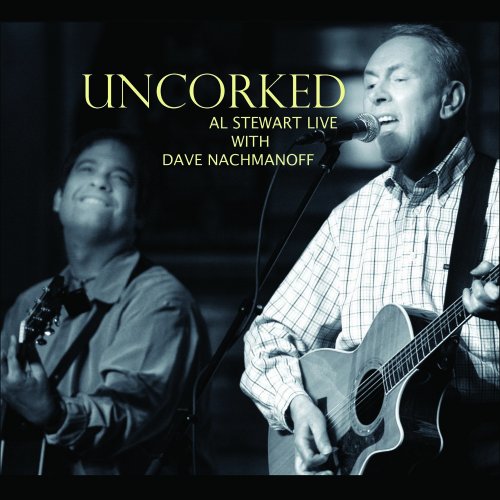