Coq au vin is a dish which will be familiar at least in name to a great many people. It is basically a chopped rooster/cockerel, slow cooked in red wine and chicken stock with a number of herbs and vegetables. It started out in France as a peasant dish but like so many such dishes of yesteryear, it has become trendy and fashionable in modern times. I have experimented with the dish before using other birds such as woodcocks and pheasants so thought I would give the recipe a try using duck. If you don't want to buy a whole duck, leg portions would work equally well provided they remain on the bone.

Whole ducks are very often purchased frozen. If this is the case, it will need to be fully defrosted in a large dish in the bottom of your fridge before it can be used in this recipe. That is likely to take up to forty-eight hours, depending upon the size of the duck. If you are buying the duck fresh, you may be able to ask your butcher to portion it for you if this is not a job you fancy tackling.

Whole duck is ready for portioning

If you are chopping the duck yourself, the ideal tool for the job is a robust Chinese style cleaver. You can however use a sturdy, very sharp chef's knife if a cleaver is not available. The first step is to carefully pull each leg in turn away from the body and cut through the skin and flesh all the way around the joint at the main body of the bird. You should then be able to pop each leg free. The wings should be removed essentially in the same way.

The legs are removed from the duck in the first instance

Don't make the mistake of removing the breast fillets by slicing them off the bone. They need to remain on the bone for cooking in this way. Lay the duck on its breasts side on your chopping board and cut down through the backbone and subsequently the breast bone to half the duck. There will be some excess bone attached to the breast bone which should be cut away and perhaps used for making stock along with any giblets which were contained in the cavity of the duck and the wings. Carefully chop each breast portion in half across the way.

Portioned duck is ready for cooking

Add the butter to a large soup or stock pot. An ordinary pot is unlikely to be large enough to cook this dish. These pots are useful for a great many recipes of different types and can often be picked up at real bargain prices on Amazon. 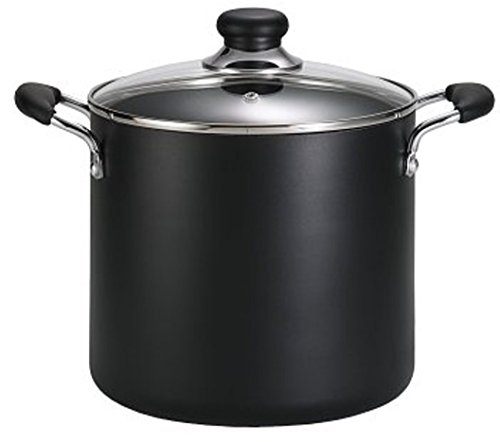 Melt the butter on a low to medium heat before adding the duck breast and leg pieces in two batches to seal and brown all over, turning them as necessary with cooking tongs.

Portions of duck will brown fairly quickly in the butter

When the pieces are evenly colored, remove temporarily to a holding plate.

Bacon and shallots are sauteed in butter

Roughly chop the bacon slices and fry off in the butter for a couple of minutes, stirring all the time with a wooden spoon. Add the shallots to the pan and saute for a further minute.

Seasonings and flour are added to the pot

Put the herbs in to the pot and season with salt and pepper. Scatter in the flour and stir well for a minute or so to cook off the flour.

Red wine, stock and mushrooms are added to the pot

Pour the red wine and chicken stock in to the pot and add the mushrooms. Turn up the heat to medium to high.

Duck portions are returned to pot

Lift the duck portions one at a time with your cooking tongs and lay them gently in the pot. When the wine and stock combination reaches a gentle simmer, reduce the heat just to maintain the simmer and no more and put the lid on the pot. Cook in this way for three hours, checking the liquid level every half hour or so and topping up with a little boiling water (or ideally more stock) in the unlikely event it is getting too low.

If you are used to making coq au vin, you may be surprised by the amount of fat which renders down from the duck pieces, as duck is of course much fattier than chicken. The majority of this fat can easily be skimmed from the top of the liquid during cooking.

Portions of duck removed from sauce

Just before the canard au vin is ready, add the potatoes to a large pot of salted water. Bring to a simmer for about twenty to twenty-five minutes until just softened.

Take a large slotted spoon and lift the pieces of duck to a large plate. Allow them to rest while the potatoes finish cooking and they will be far more tender when they are ultimately served. When they are ready, drain the potatoes at your sink through a colander and allow to steam and dry off for a few minutes.

Divide the duck portions between two serving plates, ensuring one leg and two breast portions are given to each person. Top with two or three shallots and mushrooms and spoon over a little of the juices. Lay the potatoes alongside and garnish the duck pieces with the parsley to serve.